Re-Tail Sign: Honeybee
Turnips: Joan was in town selling for 92 Bells each.

So, today is going to be a fun day. First, we have the Museum expansion! Joan is also in town and I may look into buying a little more than 100 turnips, and today is Tammy’s Birthday 😀 Yay for stuff~

My Lovely House~ I still need the door though
Eeee, I received the Sketchbook from Katie and Silver HHA Plague for getting a 50K score too so yaaay 😀

The quest for the Heart Stump is still on… :/ 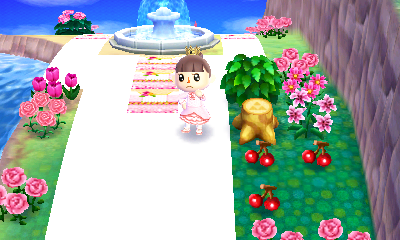 Heart here, Butterfly near the Camp Site, and Music Note and Flower from Pine Trees in the Park area once I can work on that… I know a lot of people would be happy with the Triforce, but I have plans 😐 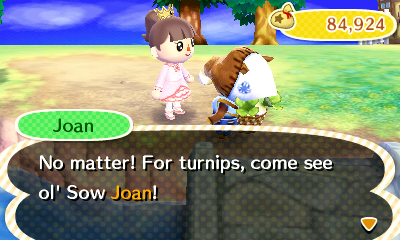 Headed to Re-Tail as I desperately needed to sell things. I may get more Rococo Dressers–I think they look nice in the trophy room and I can’t put anything on top of the Regal Dressers apparently which is making the Main room look kind of messy (of course, I also still need most of the Regal furniture). 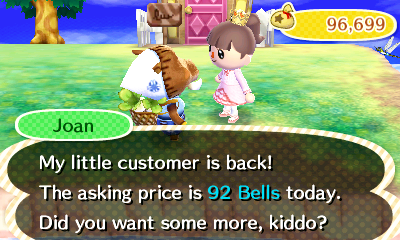 Anyway, on my search for the last fossil, I stopped by Tammy’s to celebrate her birthday. 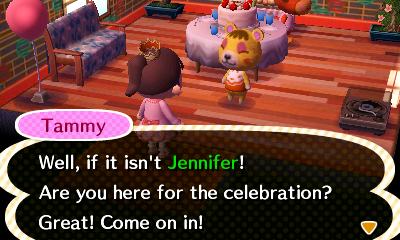 I am jealous of that balloon. 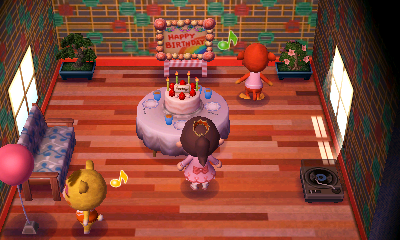 She loved it so much, she put it on. Then it was back to fossil hunting.

After finding it, it was time for the museum celebration! 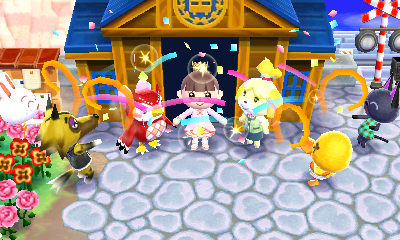 I then headed to Nook’s Homes… He didn’t have my door so I went and expanded the basement because the Mermaid Room is pretty cramped ATM.

Next stop was StreetPass 😀 Hoping I’ll eventually get to go to an AC StreetPass event. Just need to not feel like total crud with allergies ._. 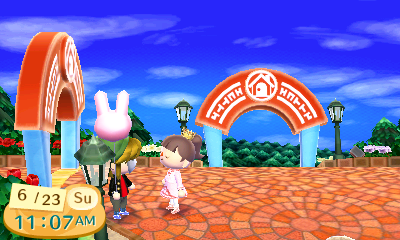 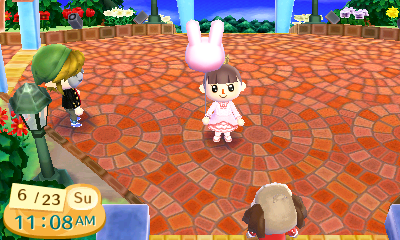 I’d wear it forever, but the risk is too great. …so happy though.

I also received Lemon Double Scoop from my mother’s character.

After buying out the shops, buying all the museum exhibits (and throwing some of the stuff I’ve been saving for them in), I was heading to Re-Tail to sell more things when I ran into Phineas! 😀 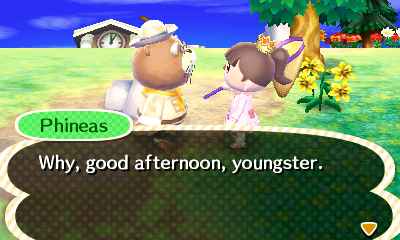 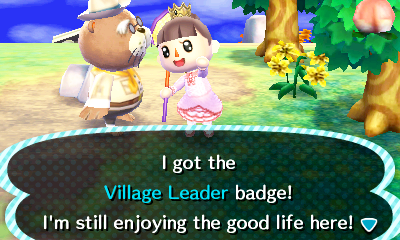 Got another Balloon Dog Lamp! He is making it Yellow so I will just need one more to be Green and I’m all set <3 After that, it was off to check the island today. While I don't need the Mermaid stuff anymore, I do still need a Treasure Chest and I really want the Sea Globe/Sea Orb/whatever it is that looks like a Snow Globe but is an Ocean-y globe. Unfortunately, Club Tortimer was pretty awful and I believe both of those items are Club Tortimer islands 🙁 So it was off to my island to check it out and also check the minigames of the day. Unfortunately (and unsurprisingly I suppose), nothing of interest there either. On the bright side, there was one new tour... The Tuna-Kahuna Tour. No Scavenger Hunt today though 🙁 I really need to just spend a day the next time it pops up repeatedly doing it to farm medals. Anyway, I did the Tuna-Kahuna Tour and only got 3 which didn't even hit the requirement. The spawn rate was awful (I was lucky if I even saw one per minute) and more often than not, it wasn't even a Tuna :/

Not looking forward to when I catch a Tuna for the museum. Unsurprisingly, I went back home shortly after this–just caught a couple of things on the island to pay for my trips.

After finishing at the island, I went and picked up my Yellow Dog Balloon Lamp :3 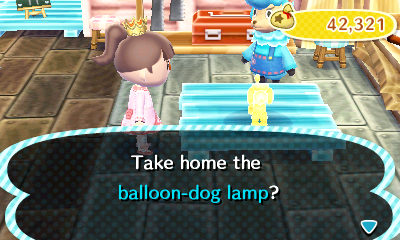 Can’t wait until I get the last one to make green. 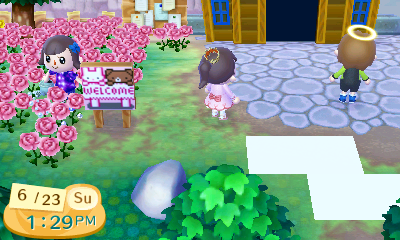 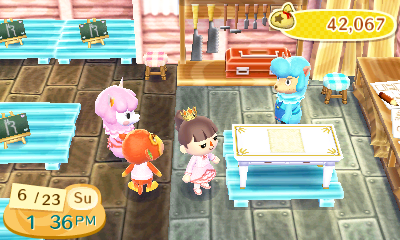 I promptly dropped off the Table with Cyrus for him to refurbish.

And then picked it up 30 minutes later 😛

While diving around, I ran into Pascal.

I received a Ship Compass as thanks.

Kyle sold me a Proper Painting. He totally overpriced it, but I successfully donated it to the museum so yay.

After a break for dinner, I received the items I ordered 😀 I got 2 more Rococo Dressers (At least one being white for the Main Room–the other will probably be Yellow again for the Trophy Room), another Aurora Screen for my Space Room, and two Picture Display Cases which will most likely be in the basement. Hopefully I can get everything (besides the Aurora Screen which can’t be refurbished) customized today.

First up was the Rococo Dresser 😀

Blue also stopped by to drop off a Lovely Doll 😀 yeeeeeees. 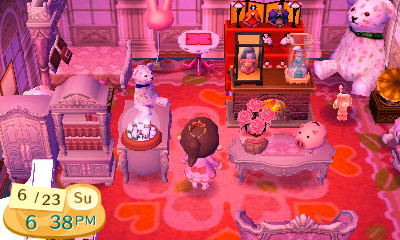 The room looks so fancy T~T <3 I then picked up my next White Dresser and continued my "pick stuff off the floor" project. 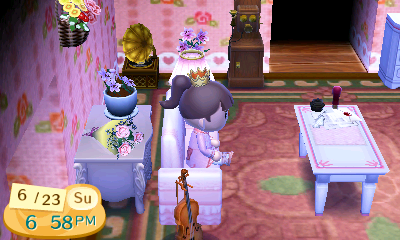 I won the auction on Animal Xing for the Zodiac Snake 😀 The Snake is actually my Chinese Zodiac sign so I was really excited! On my way though, it turns out I had a little more excitement… 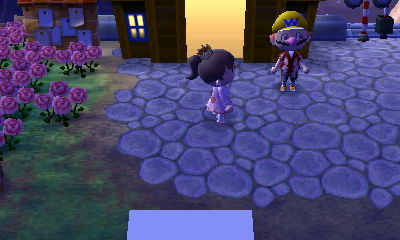 After he left (Once again, Good luck with the Turnips!), I then ran to the Town Hall to request the Fairytale Train Station. I paid it off just as quickly. MY GATE IS GOING TO LOOK LIKE THE ENTRANCE TO DISNEY WORLD TOMORROW 😀 OMGYAY.

I realized I hadn’t updated at Dream Suite today so I decided to go do that before I litter the floor with some stuff. It’ll still be a bit before I do Dream Villages though (As much as I love visiting Dream Villages, I’m not sure if I’ll get to them today…). I really should update earlier though–I don’t think my town is as pretty at night (Although, whenever I get the Heart Illumination Light, I’m sure that’ll be prettier at night… decisions :|). Apparently 8 people have visited so far though… I kind of wish I could see what their Dream Address is so I can visit them too. However, thanks to Kyle, one of those 8 people is “Nicole from Sunset” so maybe I’ll look them up when I have a working touchscreen.

Anyway, after dropping the Red Tile off at Seamstry’s house for one of her planned rooms, I put the Display Case up to refurbish next at Cyrus’ after picking up my next Rococo Chest. 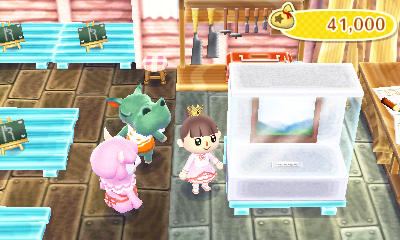 Then I went over to Mark’s to do some catalogging :3 He even let me keep the S.S. Dolphin! And gave me the last Balloon Dog Lamp I needed!

I’m not a big Pikmin fan, but I love Olimar’s ship.

Picked up my Display with the Sunset Painting. Doing the Prarie painting next! 😀 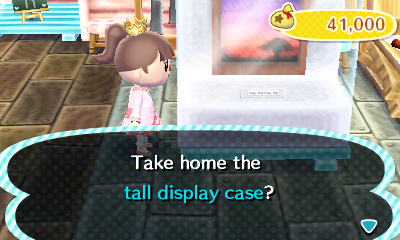 Should be able to finish the other and the Dog Lamp tonight <3 I wish there was a way to get them to stop calling you by a nickname. I'm getting sick of Honeybun 🙁 And to make matters worth, the Dynamic Painting that Kyle sold me was fake :/ I then picked up my next Display Case with the lovely Prarie picture. 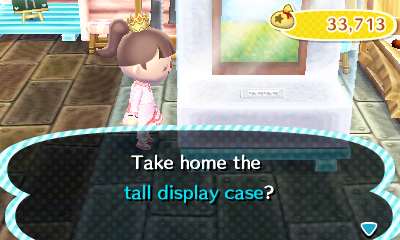 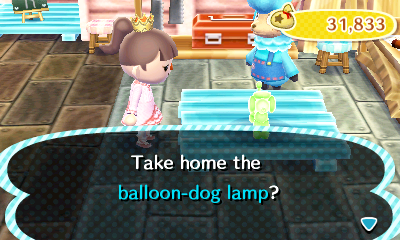 Which means I’m out of stuff to customize again 😛 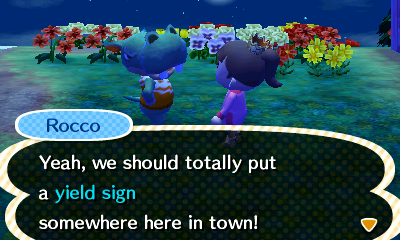 You couldn’t have requested the Zen Bell or Zen Garden? T___T *cries*

And ones I have unlocked, but can’t build until someone moves or something else is built:
Metal Bench
Faceboard x2
Street Lamp

Anyway, for anyone wondering why I haven’t been doing full streams, I’m just…super busy with trying to get the checklists up and I know nobody wants to watch (nor do I want to record) me just sitting there listening for villager alert sounds. Similarly, it just kind of stinks with the broken touchscreen and constantly having to explain things… so I’ll probably start recording after I get my 3DS back later this week (I will be sending it out sometime tomorrow hopefully).

But yes, that shall be it for today. I think I’ll save the extra Dream Suite stuff for when my 3DS is back. 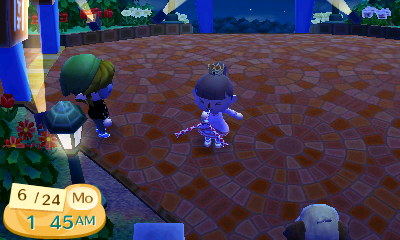 Edit 2: Selaphi let me catalog a Rococo Lamp 😀 Shall order it tomorrow! 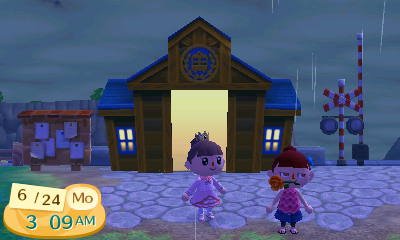