So, Tortimer was on the dock today 😀 Yaaay. I also received mail from Ruby and Rocco with a Lovely Wall Clock and Green Wall, respectively <3 And my lovely new fence is here now too: 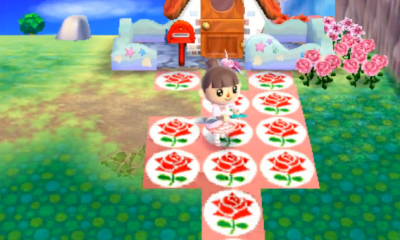 I then headed to the dock to meet Tortimer 😀 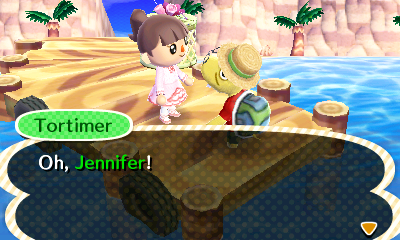 I shall have the island tomorrow and I am super excited!

As I headed towards Town Hall, I went to visit our new neighbor, but it looks like she is still asleep… 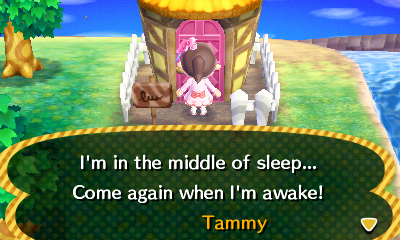 Shall have to just come back later!

After selling some stuff to Reese (and I still have plenty more to sell), I went to the Town Hall and…

And then it was fountain time. Isabelle, I’d build them by hand if I could have more than one built a day T__T

I am SO happy it fits. My path isn’t as wide so I can’t do the full decoration I was hoping on the sides of it, but I still love it so. I then headed over to Main Street to withdraw some bells to pay it off and take care of a few things too.

I was SUPER excited to see Digby here! I absolutely love StreetPass so YAY FOR UNLOCKING THIS FEATURE! 😀 I took a look around even though I know nobody was there yet XD

Anyway, the shops were still closed for a bit so back to the fountain to pay it off! 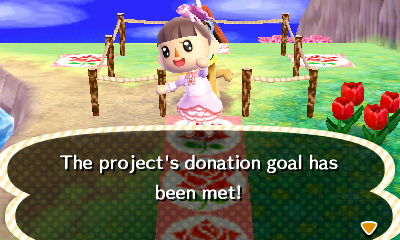 Seriously, I am that excited in real life too. I’ll probably build the sign next. I’d have to make the Faceboard designs and I want to place the other type of fountain first for better positioning.

Anyway, Saturday will be out first event. Apparently it’s the Bug-Off. I wonder if it has a specific theme or not–I’d love to prepare ahead of time… But for now, more selling at Re-Tail 😛 Then back to Main Street! It took me longer than I’d have liked to find all 4 fossils @-@

I ended up getting my next expansion as there was nothing I cared for today exterior-wise. Still a bit frustrated that I’m behind in expansions now though 🙁 Shall pay it off tomorrow (though, it’ll be like all my money T__T) 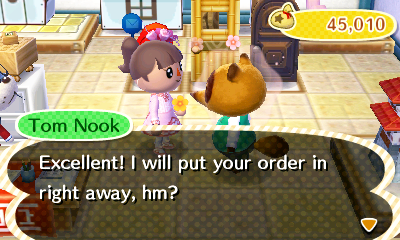 Anyway, now I guess it’s just more catching things and selling stuff until tomorrow @-@ Also stalking my villagers for requests. I also decided to visit Selaphi as she had Redd in her town and I wanted to play the GUESS THE CORRECT ART game even if I wouldn’t be buying it. There were two good ones so we both got one 😀

Thinking about it, I have yet to get any special guests.. My boyfriend got Gulliver on his first day as it is 🙁 I kind of feel a bit sad now.

Also, her Nook has the pink tile I want T~T Lucky. I asked him to make it available in my town though… but I don’t think I can buy it due to the expansion X__x It seems it may appear in my store though since I asked him to order it for my town? 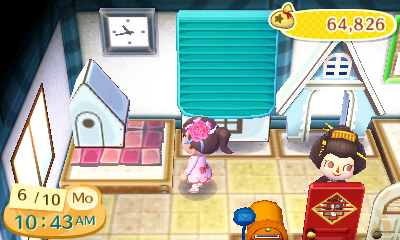 Also, I tanned a bit so now I’m wearing my Sailor Hat whenever I am outside and it’s not 4PM or later. And whenever I am doing island minigames. On the bright side, I caught some fish I didn’t have yet 😀 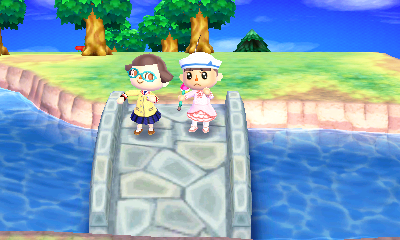 After going back to town to donate, I noticed Tammy had opened up her house. 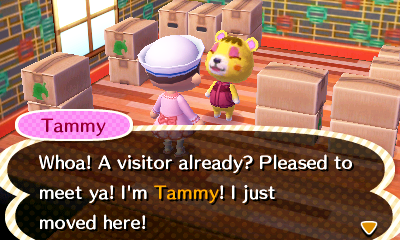 I didn’t stay long though since she’s still unpacking.

So, after more wandering around and museum donations, I was heading back and… PHINEAS

OMGOMGOMG 😀 Looks like you can’t check for more badges when you get him for the first time, but still!

Also, got stopped by Ruby who gave me a Palace Wall. 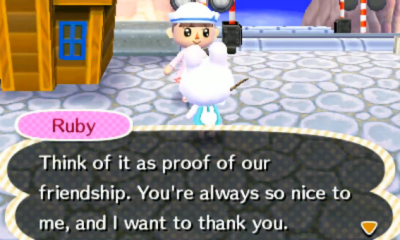 Aww… <3 T~T Thank you, Ruby. After another hopeful request chance--Flip invited me over to his house.... he wanted to meet at 12:30 though so I went fishing some more. I also ran into Phineas again and this time, he let me ask for more badges! 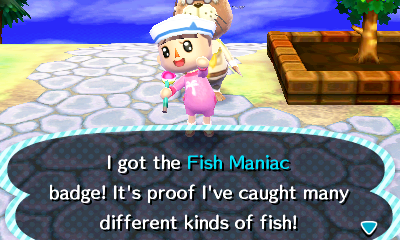 I feel so accomplished T~T I hope he has more in store for me.

And for the third day in a row… Hi Pascal. I received a Vintage Telescope from him which is really nice. Probably the first item from him I’ll be keeping. Not sure where I can/will use it though…

I then watched him crack it open and eat it… and swam along as he floated away.

After that, I had my meeting with Flip. His house was not what I expected at all. 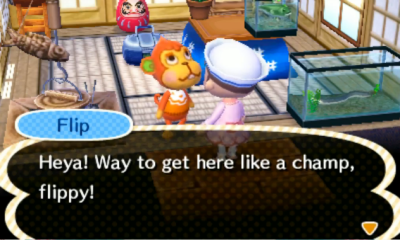 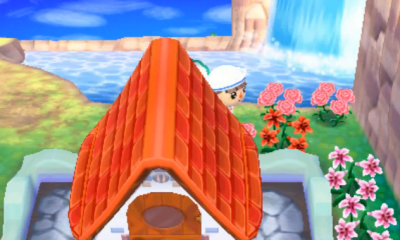 Yay for more Pink Carnations and Pink Roses! Unfortunately, a red lily from the lilies 🙁 But still yay for success!

I then remembered how I was supposed to visit Nook after visiting Selaphi… Turns out, yes, when you see something you like in another town, that Nook will let your Nook know and it’ll appear in your shop that day. 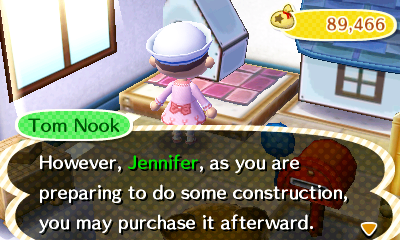 Unfortunately, I got an expansion so I can’t get it 🙁 But hopefully this means I can get more items in the future as I just need to see if anyone has any of the pieces I need!

I would say while I am enjoying the game, I kind of hate having to wait to the next day for so many things. I mean, at least I can use plenty of the money and this is giving me the chance to donate lots of stuff.

Plus I absolutely love the Aquarium in the museum.

On the way back to the museum after more fish and bug catching, Rocco asked to come see my house. 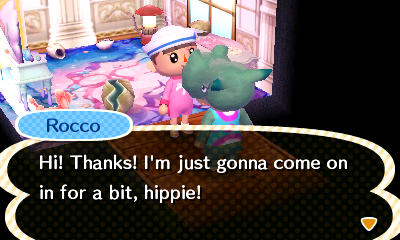 Seeing how I saw his yesterday, I suppose it’s only fair.

Ruby also gave me a new nickname (and got my hopes up again about Public Work suggestions… T__T):

…Well, it’s kind of cute. I guess I’ll get used to Honeybun eventually.

Also ended up having to get a fruit for Flip @-@ 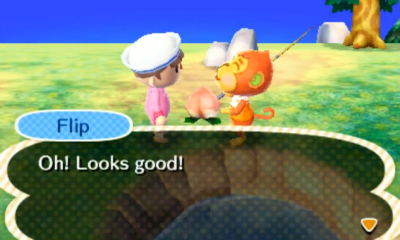 He gave me a chalkboard as thanks.

And then Weimoote visited and gave me a lovely Regal Sofa (and an apple!) :3 I can’t wait to make it pink~ Thank you again! 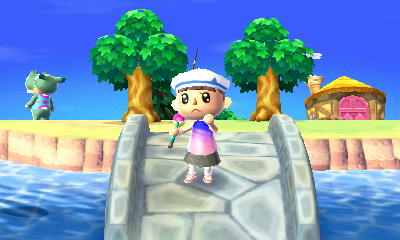 I received a Dawn Tank as thank you though :3

On a sad note, I found out that I wasted my time wearing my Sailor’s Hat to prevent tanning… apparently the list with it was wrong and tanning can’t even happen off the island until July! Blah. Making it a little brighter though was Rainy who ordered me a detective hat 😀 And at least that still prevents tanning!

I then spent the last few hours making a temporary design @-@ 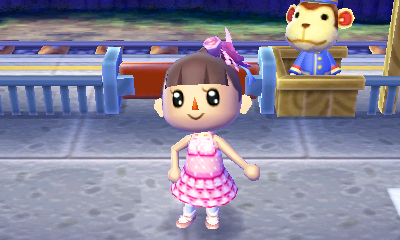 I’ll have to take a picture tomorrow when it’s not dark out and I can be on the beach… But yay for a temporary swimsuit. However, with my touchscreen issues, I don’t know if I’ll be making anymore designs–or at least not on my 3DS :/ Unless they patch in a way for you to use the D-Pad or well, just not the touch screen. To try and cheer up after time and touchscreen frustrations, I went and visited Levashy’s town. 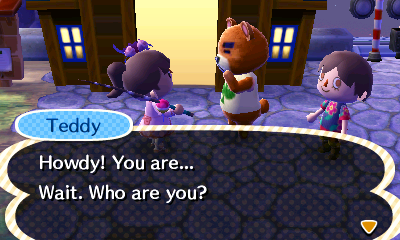 We had a little fishing contest–I lost 5/6 (The last one TOTALLY should’ve counted) to 8. I also sold there since Red Snapper was the item Reese was buying for more :3

After that, it was over to my mom’s town to help her out. Due to her changing the time because of work, I actually got to take a picture during the day afterall! 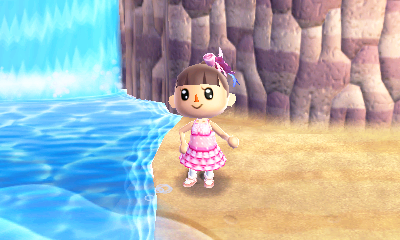 I then headed back to my town to pick up the Detective Hat from Rainy 😀 My mom also came over.

After that, I made the pattern for the sign Public Work. I’m thinking of either putting that down (40K) or a bridge (128K). The bridge is more expensive, but I could really use it :/ Plus, my house expansion will be 98K… So either 138K or 218K I guess… x-x I do have enough, but it’d be pretty much all my money. And then Rocco gave me a Striking Outfit. I also finally got a Stag (Rainbow Stag) that Ruby wanted and she gave me a folding chair for it. 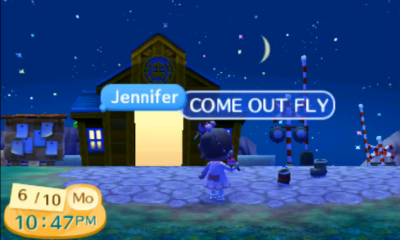 Also, I wish I could get this fly to show up :/ But I don’t want to leave trash on my map all the time. Ugh, SHOW UP FLY. …And my villagers are really nice tonight. Got a Western Shirt from Ruby @-@ I also stopped at Jessie’s for a bit and she gave me a Ghost Umbrella 😀 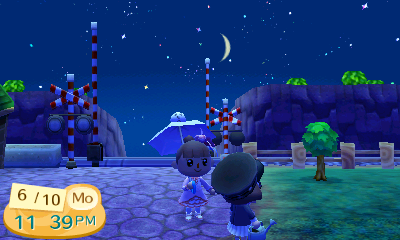 I then went to meet up with Ruu for a little bit too <3 AND SHE HAD A TEDDY BEAR IN HER SHOP 😀 (I bought it so fast, the only picture I have of it now is when I placed it in my house)

This is pretty much the only piece of the Gracie set I kind of like. Way too overpriced though… And this crown keeps following me 🙁

Thank you again for the lovely paper umbrella! I will be sure to save a Best Buy Set for you! <3 I do wish they were closer together though XD 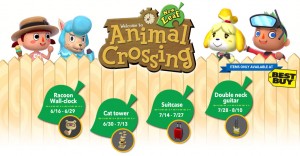 After going back to my town, my boyfriend came over so I could give him the Metroid I got 🙂 And he gave me the pants for Levashy. DO PICK UP YOUR PANTS, LEVASHY! 😛 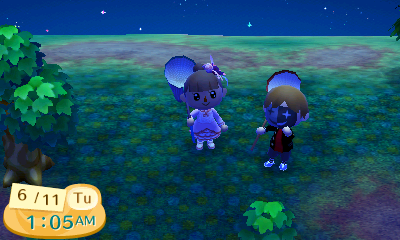 We also swam around and had a swimming race 😀 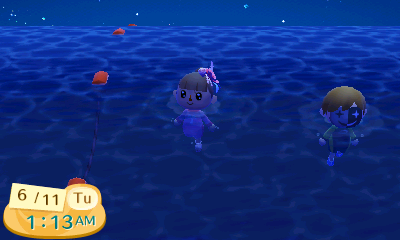 And that was it for today! 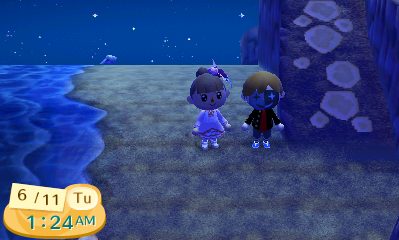 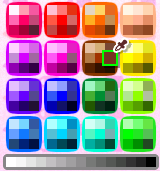 Screencapped right from the 3DS with the capture card so should be accurate!

Bonus 2: After I stopped streaming and started closing everything, I got my first streetpass (with my boyfriend) so some pictures!:

*There was a glitch and XSplit stopped the stream so two parts this time.