So, I was greeted with some mail! The Neutral Painting I ordered from Redd, a Jomon Pottery from Rocco, Red Tile from Flip, and my very first gift from mom–a High-Jump Mat. 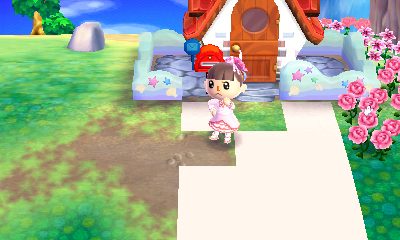 After, I checked out my new, bigger house 😀 Yay! And my fountain is done now too <3

And on my way to let Chananr over (who was dropping off some pink roses! Yay for more pink roses), I noticed I had Redd! T~T Yay for special visitors. 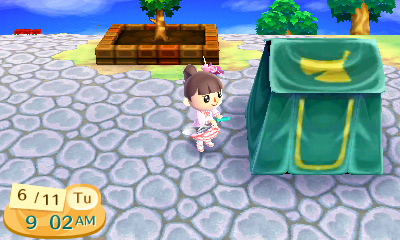 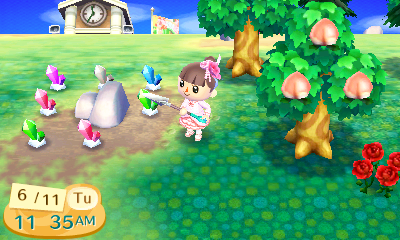 SO MANY ROSES. And some Tulips! And lovely Pink Rococo furniture from Zed too!

Zed challenged me to fit all the Rococo furniture in my little house. I did 😛 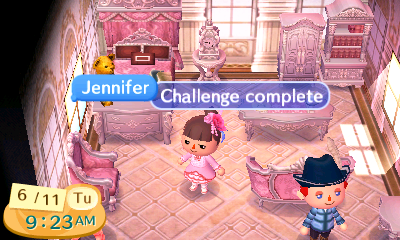 In a sad note, the touchscreen issue is getting worse :/ I can’t even hit Best Friends now (so please don’t be offended if I don’t add you/add you back today) which makes me sad. I need to get it repaired ASAP, but there is no “ASAP” option ._. If worse comes to worse, I CAN still play–just not so much with other people and I probably can’t do designs for a while :/ And it just made it harder as more and more people popped in to say Hi X__x

And it looks like I’m having another new villager. Miranda moves in tomorrow. 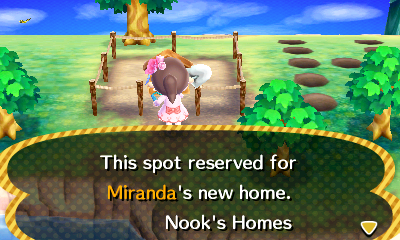 Selaphi also visited and gave me an extra fossil 😀 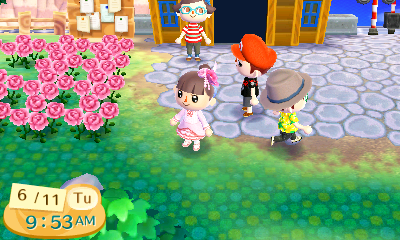 But then someone took one of my pink roses… I mean, I know I have a god amount, but at least ask :/ I don’t even know who did it.

Anyway, Redd had two real paintings–Scary and Scenic. Scenic Painting is one of my favorites. I was going to buy Scary on another character, but someone beat me to it…. seriously, ask. T__T I guess I’m glad someone didn’t buy my trash can too or something.

Then we watched Nintendo Direct (Animal Crossing character in the new Smash Brothers! Hope you can be a girl too) before I closed my gate 😛

And I cleared the shops out again and paid off my home loan. I then headed to the Town Hall so I could celebrate my fountain!

Plus, build my bridge 🙂 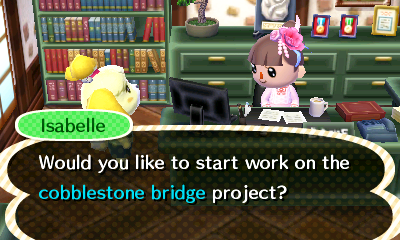 Also was asked some favors for villagers… Got a Peach for Joey and a delivered another package to Rocco from Flip. Unfortunately, Joey was fishing so I went to find Rocco… and bumped into Phineas!

Joey gave me a watermelon table for his peach. Rocco offered to let me buy it, but I just don’t want to spend too much right now so I said no. 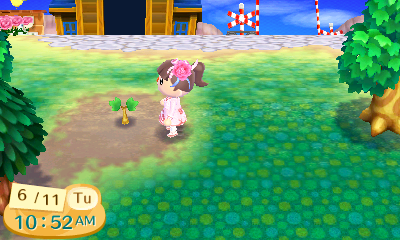 …hmm, I don’t remember planting this.

…ZEEEED! XP *WILL FIND OUT WHAT IT SAYS ONE DAY* And Thank you, Tammy!

I then went and built my bridge 😀 I made sure to pay it off too! I love how he has a little plank. 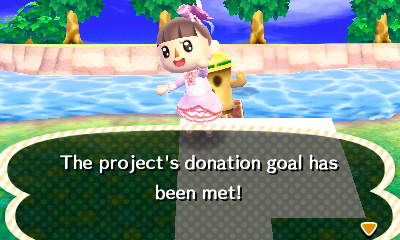 Then I headed back to my house to place the trash can and noticed I had mail! o_o 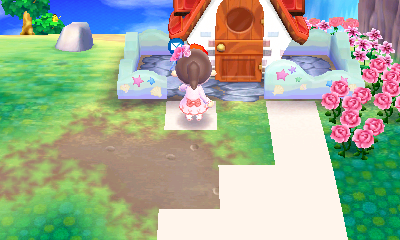 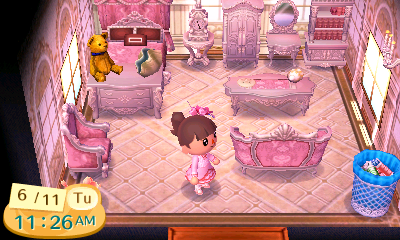 Trash Can has been placed! …I hope there’s some nicer looking ones…unfortunately, only one is kind of nice looking and it’s colors are going to look awful 🙁

After selling stuff to Reese…it was time to head to the island! 😀 Selaphi and Mark tagged along and Mark gave me the big Teddy Bear! Eeeee <3

I know I could just rent a wet suit, but I like my pink one~

After fishing and bug catching a bit, it was time for minigames! We decided to do all the ones on the list 😀

Mark had to go after a few though so we stopped back at the village. Looks like it might rain… 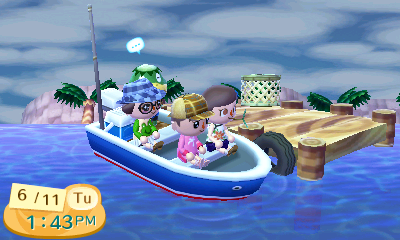 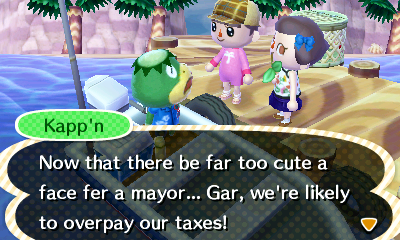 Kapp’n can be so sweet T~T When he’s not being kind of creepy. 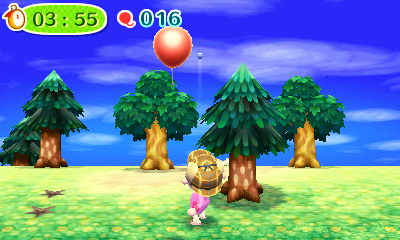 Then we hung out in town a bit–though, Jessie had to leave early due to a storm 🙁 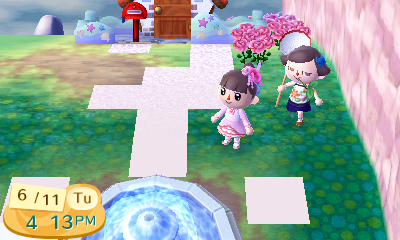 I then decided to head back myself for a little bit since it was evening-ish @-@ And I thought it’d be fun.

I was excited to see the Club Tortimer Pass when I got there! I bought it right away 😀 I hope to check out what items are there!

After lots of catching, I headed back home to donate to the museum and sell… and I bumped into Phineas again!

More badges 😀 (…should I be concerned about that Village Representative Badge considering I’ve only been playing 4 days?)

Anyway, to Club Tortimer! One cool thing is it’s just whistling and no singing on the way. 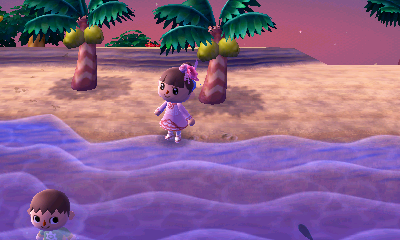 Ended up being with someone named Cole. We greeted eachother, but were both quiet for the most part otherwise. Not that I mind–I’m pretty shy! They did try to help me out a bit though :3 And we played a minigame together too.

They were very nice :3 Thank you for playing with me! I’m sorry we couldn’t play longer. 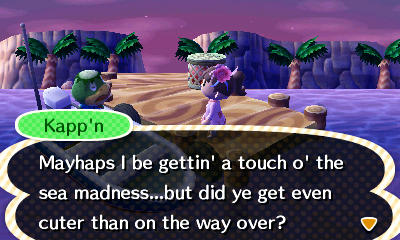 …Kapp’n, stop flirting with me T~T

Anyway, I then took an hour or so break to make dinner and upon returning, went to visit Jessie! 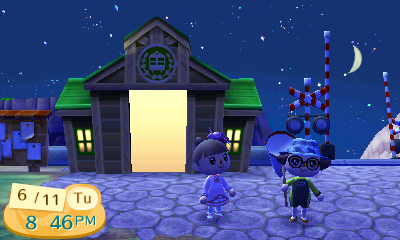 Unfortunately, as the touch screen issue gets worse (and of course this would apparently happen during Animal Crossing-ness), I find myself getting more and more down :/

Swimming in a corner sadly while a jellyfish apparently feels I am not sad enough–thus went to sit in a different kind of watery corner. I didn’t do very much due to just feeling down in general. It’s gotten bad enough to the point where I feel I may not even have a touchscreen tomorrow.

I then visited Levashy to drop off the pants for them.

We also played hide and seek. (I was found) 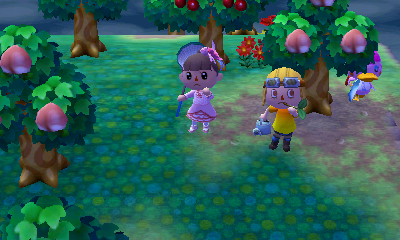 I found Levashy back though.

I then went to Mark’s town to drop off some pants for him too.

He gave me a Baby bear as thanks. Considering I need one in each color, every teddy bear = <3 I then headed to the island by myself. I know Re-Tail has pretty much closed (although, I sold a couple of things quickly before), but saving up medals is kind of important and I just wanted to get my mind off stuff...

Also went and did the new tour before going back home… Will have lots to sell tomorrow–or well, later now I suppose.

I love the museum. Yay for being able to donate more. 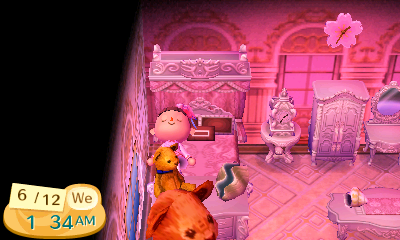 …I wish I could lose the little bit of tan I have :/ it’s driving me nuts.