So while I’m not feeling much better than yesterday, it was still time to play (although, I was up a bit earlier than I wanted). Current goal is to avoid as many of my villagers as I can until 9AM when Ruby wakes up. I didn’t want any instant requests again from anyone besides her. Regardless, even if I do manage to get them immediately from her, there’s a chance she could request something besides the bridge. I may actually do restarts if she does though :/

But yes, she can request:
Fairytale Bridge (PLEASE REQUEST IT RUBY)
Modern Bridge (any villager can request this)
Round Streetlight
Illuminated Clock
Illuminated Tree
Anyway, I sadly did run into Kiki…but thankfully, she just sold me something. And yay for bushes growing in~ 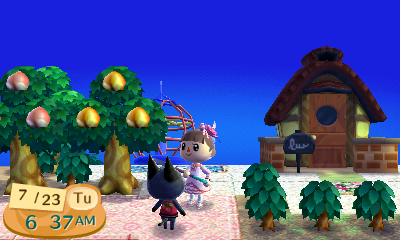 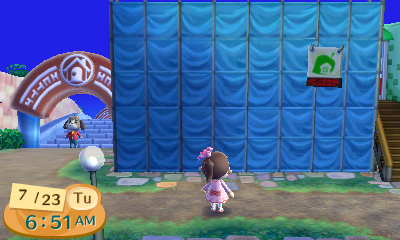 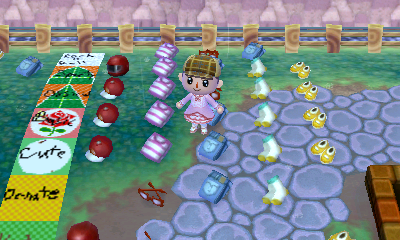 Will be doing a lot of ordering tomorrow. I’m a bit concerned about Modern though.

Since I was waiting until 9AM and trying to avoid my villagers until said time, I decided to do some Dream Suite stuff. Of course, I made sure to update first and apparently 230 people have viewed Pink Sea so far… so many T~T To my surprise though, one of them was someone from Japan or with the Japanese version of the game! 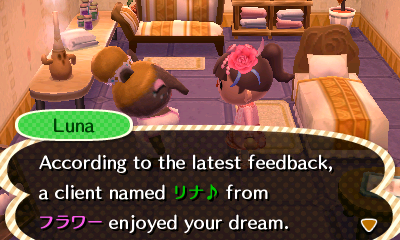 Thank you for visiting! T~T I’m glad you enjoyed it. Anyway, time for Dream Village visits! 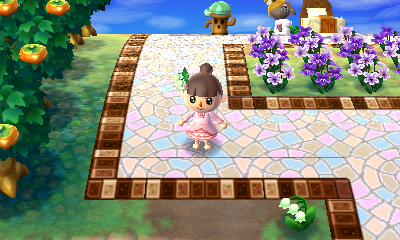 There was actually one more faceboard, but it made me sad so I didn’t use it. 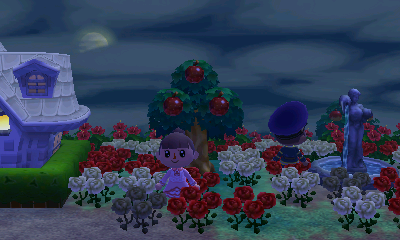 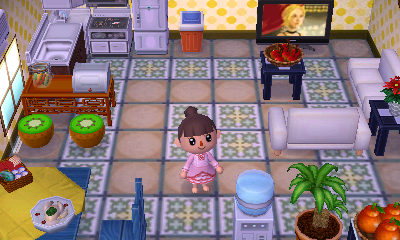 I actually was looking for a different one, but this was still a nice town. So many towns with the same name (And it’s Case Sensitive so…)

Anyway, next I decided to do some of the Villagers of some users in the Stream Chat. 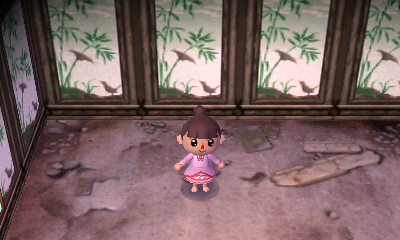 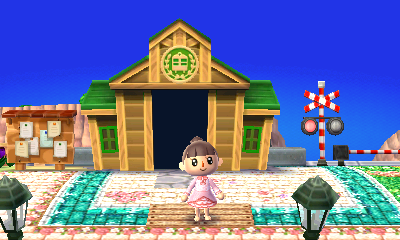 But yes, that is it for Dream Suite for now! I’ve been asked why I don’t use teal water–especially by people who know that I prefer the shade of blue. Simply put, it doesn’t match the water in the game. While not teal, the color matches a lot more which makes it fit the fountains and rivers a lot better in my opinion.

Anyway, it’s after 9AM so let’s see if Ruby is out of her house. Sadly, she was inside so before saving and quitting to try and coax her out, I stopped by Re-Tail to sell and gave Cyrus a poster sign to refurbish: 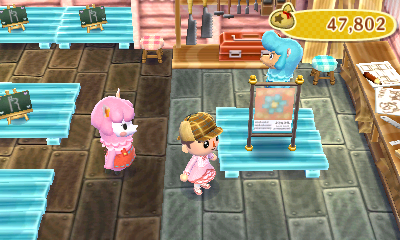 Upon saving and quitting, I was greeted to mail–the items I bought from the Showcase had arrived. It was then time to check for Ruby and…she was outside! I got an instant bling and well… 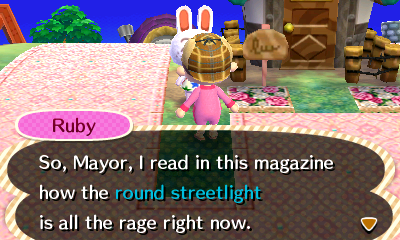 😐 *RESET* I just… I need her to request it before Astrid leaves. I really do–and I don’t want to risk it.

I had to reset several times to get her back walking around… and she requested the Streetlight AGAIN -_- So I decided to try one more time… if she requests it this time and not something else (afterall, it’s only a 20% chance…), I’m going to assume it’s generated at 6AM :/ I could always reset for something I want then, but at least if I get it out of the way, there’s a higher chance she’ll request the bridge tomorrow so…

Anyway, I didn’t get an instant request this time so it was time for some swimming.

1. Asked me about what kind of shovel I’d want.
2. No bling :/
3. She asked me to replace her modern chair.
4. No bling…
5. She gave me a Big-Star Tee
6. Different Suggestion! Illuminated Tree this time… 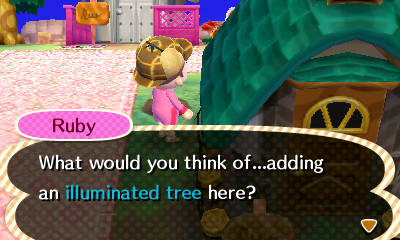 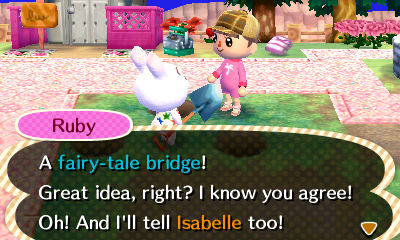 You have no idea how good of an idea that is or how much I agree.

Tomorrow, I’ll probably start trying to get requests from Phoebe (I need 3 from her) as I want her out next… however, I do need 2 things from Kiki before Phoebe can move (Since they will make sure NOBODY ELSE can move there ever again -_-), but I may actually try Miranda as I only need one thing from her… And it’s something I wish I tried to get from her sooner because if it turns out it’s “too close to the train station”, I may need to demolish my faceboards and rebuild them which would suck.

But yeah, I’m pretty sure it’ll be either Miranda, Phoebe, or Kiki next (possibly that actual order). The one nice thing with Kiki is since she’s up so early, I don’t really have to worry about running into anyone. Phoebe sleeps in until 11, I think Miranda sleeps in until 10? She may get up at 8 though actually… Kiki is up at 5AM or 6AM. But yes, for reference:
Miranda: Statue Fountain
Phoebe: Picnic Blanket, Windmill, Geyser
Kiki: Fairytale Clock, Flower Arch, Drinking Fountain

Picking up the Poster Stand~ 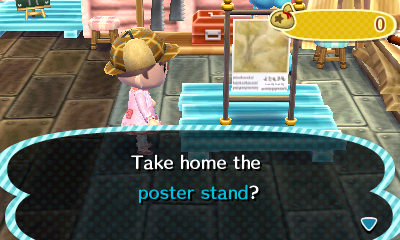 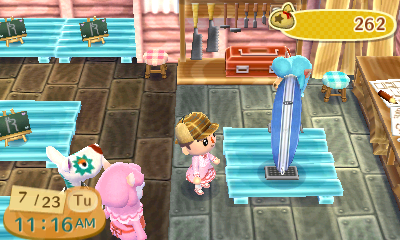 And picking up the surf board… XD 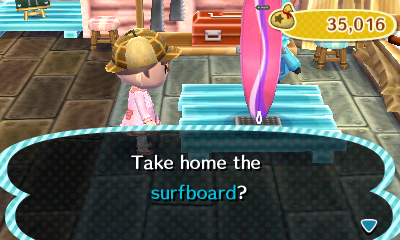 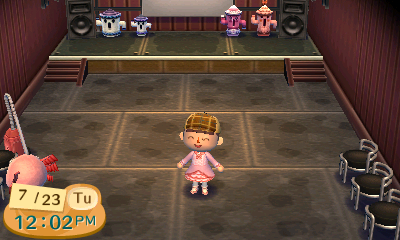 Happiness Joke! I then went to work at Brewster’s :3 Did perfect as always~

Anyway, after paying off loans for my other 3 characters, it was time for a break. Thankfully, I finished pretty much everything I wanted to do today @-@ So I shall end this here before it gets too long. If anything else big comes up, I shall do a mini entry~ 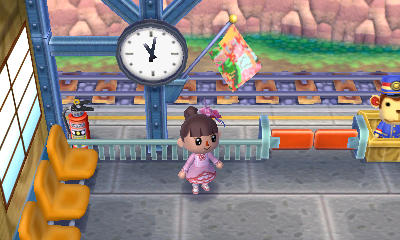