So, to be honest, what happened last night is still looming overhead so I don’t expect to play much today. Even if I try to imagine otherwise, it really sucks. In general, I’m pretty unlucky–but usually in not getting over seeing something I would love to have and not being able to do anything about it. And considering what I’ve seen people offering Marina, this could’ve been my only shot. About the only “positive” is I know I would have not had a free spot at any point. With so many people playing in this household and all the effort I made for trying to lessen destruction by incoming houses, the last thing I would do is make it so I could get some random villager from StreetPass or due to a friend coming over.

ANYWAY, in an attempt to not go back to curling into a ball of sadness, let’s hope someone who isn’t Marcie, Julian, Diana, or Flurry wants to move today. Preferably Ruby, but I’ll take Joey as well (followed by Kiki, Buck, or Kyle). Phoebe I still want to move away last to lessen the chance of someone finding a way to park their house there still. Of course, the fact that I was greeted by rain was…mixed. 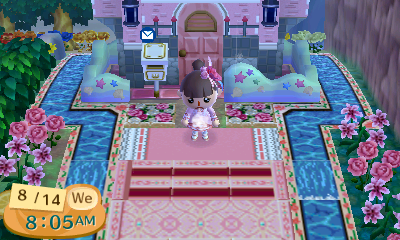 At least this means I don’t have to hide my ponytail to prevent a tan today. 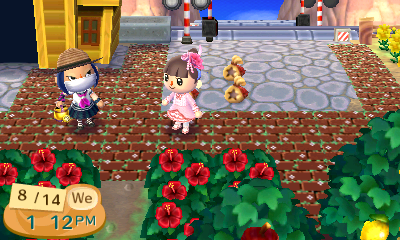 I am very excited.

Also, to note yesterday’s poll… With border won so I will most likely be keeping it this way. A few people commented on the ducks though–to put it simply, I didn’t actually have anything of the ducks I made previously so I made all of them from scratch again and colors varied for similar reasons. I really need to save designs better.

I had gotten a bling from Kyle and thought maybe he wanted to move, but instead he requested a Pyramid. 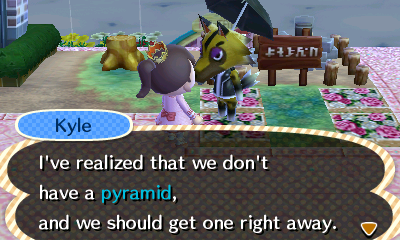 Sorry Kyle, we’ve already decided on Public Works. (and already had to remove one T__T)

However, I then remembered that tonight will officially be Obon in Japan 😀 Which I’m really excited about. Ruu had invited me over so I will be looking forward to meeting up with her later. 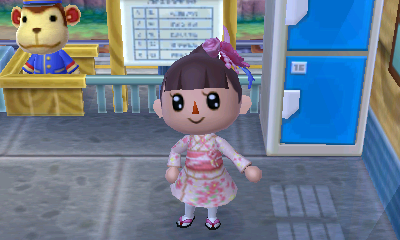 I also decided to dress the part a bit in advance. I think I will stay like this until the 16th. To be honest, I still have yet to decide if I want a Cucumber Horse or an Eggplant Cow–nor do I know the significance or understand too much about Obon, thus, I have decided to give myself a bit of a history lesson. The most I know is it’s kind of similar to the Firefly Festival in Harvest Moon–it’s to honor the spirits of ancestors/those who passed out and I think may be somewhat a religious holiday? I don’t know if everyone who celebrates it is religious though…

After thinking about it for a bit, besides Harvest Moon, I realized the dance and things reminded me of something else… Episode 20 of Pokemon–the Ghost of Maiden’s Peak–well, the end of it anyway. Whether that was actually supposed to present Obon, I do not know, but I do know that the Princess Day episode was based off Girl’s Day. SPEAKING OF WHICH… that Pokemon Hinaningyou is beautiful and everyday I wish I had one. Or even a Hinaningyou is general. I’m sure there’s people thinking “oh pfft, it’s just a bunch of dolls on stands” BUT NO. YOU ARE WRONG. The order is -very- important. Each one has a meaning. THOSE LITTLE GIRL’S LEARN THESE THINGS AND MEMORIZE IT AND SET IT UP AND IT’S BEAUTIFUL T___T One day, I will have a Hinaningyou and I will learn the proper order and I will set it up and I’ll be all YAY and it will be great, but first I need to save up a bunch of money because shipping would probably be super expensive and they aren’t cheap to begin with.

GETTING BACK ON SUBJECT… I did eventually find out about the Cucumber Horse and Eggplant Cow. So cute! Though, some are also done like the ones in the game…but I still don’t know how I’ll decide between them T~T Afterall:
The Horse is to bring them home quickly
The Cow is to send them away slowly and so they can carry away gifts.
Regardless, it was a fun read and Aeo taught me a bit as well <3 🙂 Going by that, I suppose I should get the Horse for now and hope I can get the Cow later...? but what if that causes them to be stuck here? T__T these are the things I worry about. Anyway, back to actually playing Animal Crossing... to be honest though, I don't really have too much to do today. Which means maybe I should stop putting off flower transferring. >_>

On a different note, I’m happy I finally managed to get Julian to change his shirt. 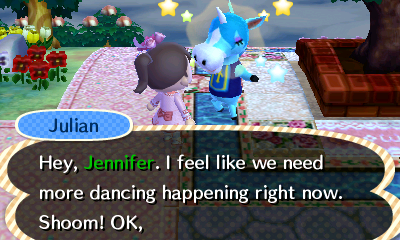 Yay. I ended up sending him like 7 total >_> It also took quite a few for Marcie and Flurry. Diana actually changed pretty quickly though. Speaking of villagers, I went and placed a bunch of orders for furniture for their houses… ugh, it’s going to be so annoying getting the mail for who knows how long X__x

Flower transitioning ended up taking a lot less time than I expected as there wasn’t nearly as many as I thought… in fact, I only finished a small part of a section and barely took over any of my own flowers. I don’t know if I should just take all my other flowers ahead of time and then work in filling spots or continue doing an exchange so I don’t really go down in flowers… Regardless, this has proven I need way more pink lilies, carnations, and roses :/ 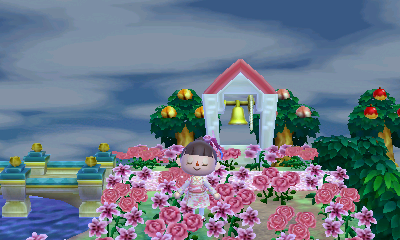 I suppose the section looks nice, but I can’t help and be disappointed that I still have such a long way to go. I don’t think I’ll be able to get all the flowers set and done before October. On the otherhand, with how villager moving is going (it sadly looks like nobody is thinking of moving), I don’t think I’ll have all my Dream Villagers in either which makes me really sad. Regardless, I think I’ll put off doing more flower transfers until everyone is moved in… That way, I can work on that along with landscaping in general and not grab more flowers than needed. Unfortunately, while I’ve had general ideas for most things (flower patterns, public work placements, etc.), my mind is an entire blank for the actual landscaping ideas. Other than wanting Pink Hydrangeas, Pink Lilies, Pink Roses, and Pink Carnations for the most part anyway. This is most likely because I’ve never bothered before–besides this being my first time really doing paths, I usually just let things grow wherever they wanted.

However, I did recently plan out one thing after seeing Chananr’s Re-Tail when I had gone over for Weeding Day… 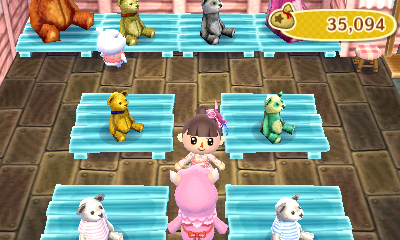 I’ve already catalogged the Sloppy series nor am I really in a great need of bells so I decided to put in Teddy Bears as to prevent villagers from murdering their houses by putting stuff up. I know I still technically need to catalog 2 parts of the Cardboard Series, but my villagers seem too clean to put any of that kind of stuff up anyway so.

After cleaning up Gyroids over in Bellton (unfortunately, I didn’t get any I don’t have yet–did get one I wanted though), I managed to get a gold ore giving me 3 to try again for a gold piece of furniture. Hoping for the bench, dresser, screen, or table!

Regardless, after handing it over I took a long break for the day. I did pop in though to check on what Golden furniture I managed to get…sadly, another Golden Man.

Upon getting back, Imaginos invited me over for catalogging. I may have the gold catalog badge, but I still want to 100% it! I also am starting the refurbish furniture for Villagers project so I’m making the Rococo Set in “Yellow” (Gold/Light Blue) for Julian.

While putting some of the items I got from Imaginos in my house, I received a surprise visit from Ruby. She gave me a Tall Cactus.

After that, it was just more back and forth refurbishing before heading to Ruu’s town for Obon 😀 (I’d say Happy Obon but I’m not sure if that’d be offensive considering… umm… Best wishes to everyone celebrating Obon! I think that’s better. …hopefully.) 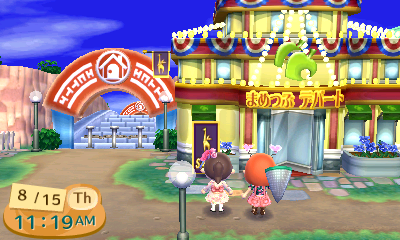 Before visiting Isabelle, we went shopping 😀 I really love the cute sale sign. It was then off to see Isabelle! 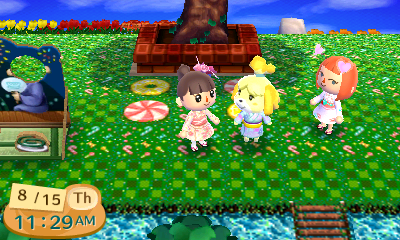 Eeee 😀 We all look cute.

And it turns out it was random so all my OMGWHATWILLIPICK was for nothing XD I ended up getting an Eggplant Cow and Ruu gave me a Cucumber Horse 😀 I can’t wait to place them in Emi’s house. Also, as always–pretty faceboards!: 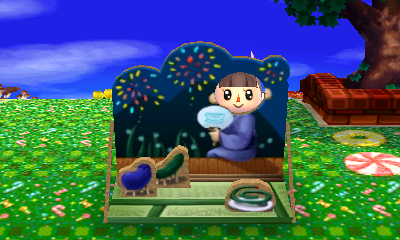 So much fun <3 And thank you for the lovely pink flowers as well! We also went to the island a bit for minigames 😀

Thank you again for the nice time! <3 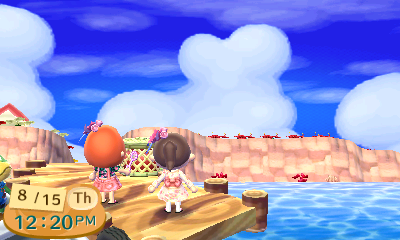 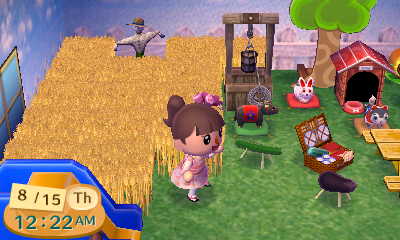