Day 69 – someone please tell me to stop talking

I ended up being up late so I decided to hit 6AM and greet Marcie and Flurry–plus take care of any possible mail. I ended up getting a bonus surprise of running into Phineas though.

Another gold badge~ Still no writing badge though…

I also finally got a moving notification from someone…but it was Flurry :/ I told her not to move, but I’ll be keeping a close eye on her. Definitely not what I wanted to see considering how these past few days have gone villager-wise. I really hope she stays. And hopefully someone else will want to move.

Anyway, I went to bed shortly after thus causing me to wake up much later which stinks as I hate when my sleeping is messed up and there’s not much I will be able to do about it at the moment. This will probably be a short day of playing though which stinks because it seems lately (similar to anytime I plan something lately actually) whenever I want to do like Dream Suites or work on Medal grinding, something comes up. :/ Of course, I won’t use this for crazy real life stuff–I have other things for that, but for now, it is Animal Crossing time. I still have things to dig, rocks to hit, and I’m going to make all my other characters talk with Flurry lots to help keep her here >__>

I would say right now, it’s a large mixture of what to do first. After the Marina incident, I’ve been more than a bit anxious on securing her. Unfortunately, people either want more bells than I have/am comfortable paying (I’d rather throw my bells at friends) or want to trade. I don’t really have anyone to trade so… Not to mention (if people couldn’t guess by how few times I open my town), I’m just paranoid? Other than whoever took a pink rose, I haven’t had anything happen that I can think of (or know of). This is the first time I’ve really put myself out there in the AC Community besides usually lurking (although, if you checked some of my accounts, you can see how long I have been lurking). Besides paranoia, I’m generally shy so conversation is something I have a hard time with (despite how much rambling I do here) and I’m really really really awful with the touch screen. Regardless, I have met a lot of awesome people and I am thankful that I did <3 In general, I think part of the paranoia is most people can just rebuild. If someone cuts down all your trees, it's okay! You can replant them. Meanwhile, I probably wouldn't be able to replay the game if that happened. Even if it's just a few digging and things, unless they magically were just as they placed (which won't happen), I can't pick up a game again. Part of why I've always enjoyed Animal Crossing is because even as I finish, I can still enjoy it as it is. I can still walk around my house and enjoy my flowers (especially thanks to the Beautiful Ordinance where I no longer have to worry about watering them) and talk to my villagers and that's fun to me. A lot of people replay at that point because they run out of goals, but I just want to reach that point so I can stop stressing and enjoy the game for what it is. Of course, I'm the only weirdo who tends to feel that way 😛 ...and I got totally off-topic from my first sentence. Darn it. Right, so mixture of what to do first. 1. Work on Villagers - Unfortunately, this is mostly luck right now. Marina showing up one of the few times I time-traveled kind of said to me "stop". I really don't like to time travel so... but yeah, I'm essentially stuck on relying on luck until Peanut is out and if I find someone selling Molly and Marina... hopefully for reasonable prices because whether I can afford 20-50+ million or not, does anyone realize how long it would take to drop that much? X___x 2. Refurbishing Rococo Furniture for Villagers - I've been working on this and part of me wants to smack my head against something. I don't have Cyrus unlocked on any of my other characters (I think--maybe one?) and I have the gold refurbishing badge now which kind of lessens the motivation somewhat for me even though I really want to make my villager's homes nice as most of them are missing a lot of furniture. Regardless, I really don't have the room which is the problem 🙁 -----Still need to send Julian a and .
—–Diana needs a table, sofa, and dresser. Also need to order her a harp and phonograph.
—–Marcie needs a table, sofa, chair, , dresser, and bed.
—–Flurry needs a , dresser, shelf, , lamp, and wardrobe. She also needs a Princess Chest.

3. Medal earning/Dream Village visiting – These unfortunately take up so much time though so I wouldn’t really be able to do anything else then.

4. Fish Catching/Bug Catching for Badges – Same as above really. I have an easier time doing it when trying to catch something specific, but it ends up taking me longer otherwise.

5. Flowers. I can try counting just how many I need at max… but it may just be a waste of time when I still have people I need to move out and in :/

Regardless, it was Obon in a few people’s towns today so I made sure to stop by to say Hi :3

Also got to catalog lots <3 Thank you again! I tried not to stay too long though as I already had my items and I know a lot of people wanted them @-@ After Obon, the next exclusive event is actual a North America event! You get a lovely Picnic Basket. After that, there's the Moon Viewing event which is...well, all four regions have it, but like the Countdown, the item varies per region. North America gets a Wheat Bundle, Europe gets a Veggie Basket, Japan gets Dango, and Korea gets Songpyeon. I wonder if the faceboards differ per region or not... Also, shortly before Labor Day I will be envying Japan and their Weeding Day because I want those topiaries and I have to wait until April T__T But yes, after the Moon Viewing/Autumn Moon event, the next region-exclusive event is also North America only--Explorer's Day which is the Second Monday in October. Then, the only other region-exclusive event is Naughty-or-Nice Day in Europe on the 6th of December. Of course, the Countdown items vary per region too... GETTING OFF EVENT DISCUSSION... I was super excited to see my Gracie having a sale today. I know she was supposed to, but I heard she wouldn't have her sale if you opened her the same month. 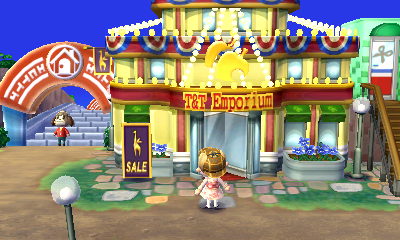 I also decided to visit Dr. Shrunk and give him some extra fruit to see what happened. He essentially re-shows you one of your random ones and talks about how you’ve seen it before, but it gets better and you already have all the jokes you need. Still cute though <3 In the end though, today was just really refurbishing things and making sure Flurry isn't leaving..