The day started with being greeted by yet another silver slingshot and mail. 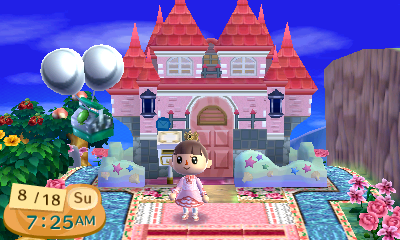 So many silver slingshots…

Sadly, I can’t celebrate the Fairytale Clock until tomorrow :/ Blah. The fireworks are nice, but I wish they weren’t every week… or that you could do stuff after midnight like most of the holidays Isabelle takes care of. It’s Redd’s tents fault. 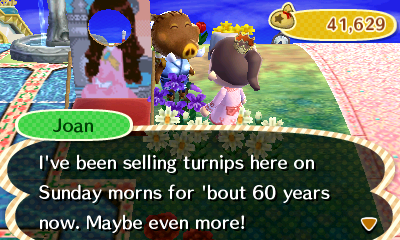 I said Hi even though I won’t be buying any turnips.

I love this clock so much: 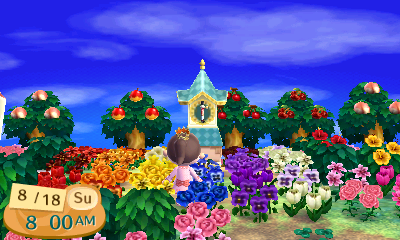 Meanwhile, I guess I’m just pretty paranoid. Right now, I have 3 signs in place… I have to remove 2 of the 3 whenever Kyle and Buck move. Sadly, I can not figure out which sign to remove. There is a chance I could possibly place the Reset Center before the Water Pump which would allow me to keep up 2 but bleh :/

In a bit more detail:
Sign #1 worries: This is pretty much an empty area in the park. There is no public work I care to put there (thus why I made a cute little pond out of patterns), however, due to the fact that there is nothing there means someone could move in. Right now, the area is relatively safe due to Buck’s house, but as soon as he moves I plan to place the Drinking Fountain and that won’t be enough to protect the area unfortunately. If a house goes down there, besides killing the pond, it could knock out some of the trees around the Picnic area (almost like Peanut’s did), block the bridge, and/or kill many of the bushes. It would just be really awful and pretty much ruin the park as a whole :/

Sign #2 worries: This sign is essentially holding the spot for the Round Topiary which I will be unable to unlock until the official Weeding Day which is in April. So yeah, a long wait. The problem here is similar to Sign #1’s–if I get unlucky, it could block the bridge, kill the bushes around the Zen area, and/or ruin the place I plan to put the topiary.

Sign #3 worries: Obviously, this is the private garden area that I had been looking forward to for SO LONG to get up. Worst case scenario would be either it blocking the bridge or going too far to the right and killing bushes/hybrids. I only tried for one of each so if any of them get trampled, I’m screwed and have to start from scratch essentially :/ Not to mention I worked so hard to get it all set up nicely too… If a house had to go there, if it just went across from the bell on the side where the sign is and stayed away from the bushes/flower frame, it’d suck but I could probably deal… depressingly anyway.

So, I have no idea what to do. I don’t know which I should remove first when it gets to that point (if any) or what. I mean, I can possibly leave up 2 signs instead of just one if I can put the Reset Center in a way that will still fit the water pump but not enough room for a house… still a lot to think about though :/ But yeah, I’d be lying if I said I wasn’t upset about it.

What really frustrates me is I have plenty of places that houses could go fine so it’s not even a high chance… but well, look how close Peanut came :/ It just makes me feel super upset. And before someone suggests it again I can NOT do the reset trick. I made all four characters on Day 1, I got them all started pretty quickly, they are now almost all done, and the “move a character out” thing only works to make that character mayor of their own game so the other game can’t have a file on it AND that character can not return. Not to mention I know myself well enough that I wouldn’t even remember to do a new character thing anyway. I can’t even remember to on my alt 3DS to try and get specific villagers on Day 7 when at 8 people :/ I’m just not very good at that. 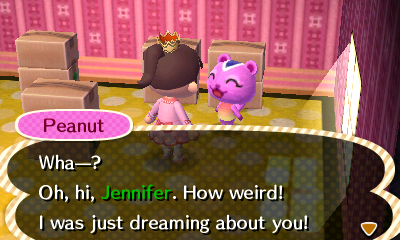 She was asleep in her house.

Anyway, today is mostly just going to be some catalogging/refurbishing due to having a lot to do today so I guess I will end it here @-@ Also hoping to do some catalog checks today so yay~