So due to some issues yesterday, we will be sending out my 3DS in about 20 minutes… so going to see how much I can do before I have to use my boyfriend’s 3DS.

First of all… My Door is done 😀 Yeeeeeeees.

I also had quite a bit of mail–most from Catalog ordering, but I also received mail from Mom, Ruby, and Rocco. I received a Zebra Umbella, Cushion, and Kiddie Clock respectively.

On my way towards Re-Tail while fossil hunting, Flip requested something… 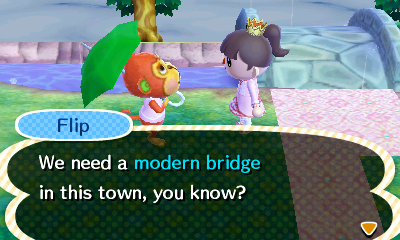 I’m happy for the request and all, but there is absolutely nothing Flip can request that I want at this point :/ So I’m kind of sad as I’d have preferred ANYONE else to suggest something. 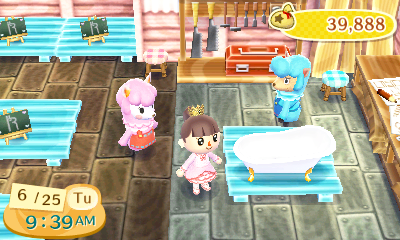 I also found out he can customize the Loom somehow so I may do that before dropping it off at Seamstry’s. 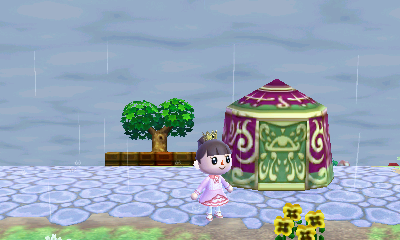 I also spotted a special Blue Balloon which guided me to my last fossil and Gyroid. Thank you special Balloon. (it even contained a Balloon Lamp).

I then decided to stop and update my dream early. I wish I knew who all these people were… apparently 12 people have visited Pink Sea now @-@ The most recent being Cinta * from KingChow. 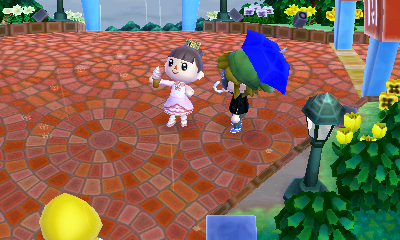 Picking up my Claw-foot Tub… 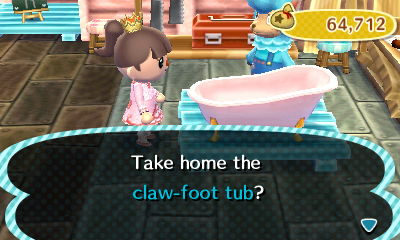 I decided to leave the Loom alone.

I went to visit Nook’s Homes. Upgrading my Mermaid room to 8×8. Next will be the Toy Room…then probably the Trophy Room and then Kitchen.

I then opened up for Blue to visit so she could drop off Katie.

Anyway, I then went to visit Katrina as she should be opened now. This will be the 3rd Town visit so just 2 more to go. I will apparently have Good fortune with items if I wear a Fruit shirt.

I was then greeted with a bunch of my mail arriving. I took the Toaster to be refurbished with Hearts. 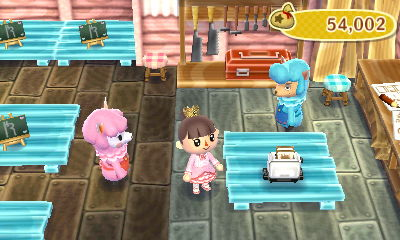 I also decided since it was raining, to put on my Umbrella and Bunny Coat.

Then it was off to the island… Since I was using a different 3DS, I had a touchscreen that worked and was able to chat which meant I didn’t have to run away immediately from Club Tortimer. The items stunk, but at least I could say Hi to the person.

It was someone named Juani from Spain. They seemed nice enough, but I think they scared away the Beetle I was catching on purpose as they ran around right after typing and weren’t that far away :/ And right before I hit it with my net too T__T

I then went to my island… Items were terrible there too. I did some of the Tours though.

The 3 fishing ones, the Shark one, and the Locust one <3 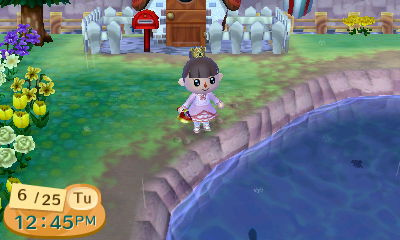 A screenshot for fun~ A bug shadow, a fish shadow, and a balloon shadow all at once! Thought it was amusing. 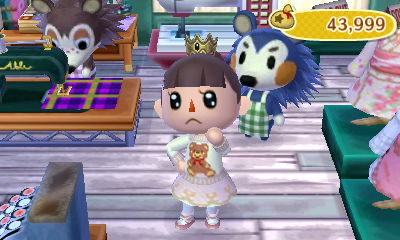 The finished skirt on the Teddy Bear Dress.

Going to take a moment to address something though–some people have asked me if I’ll be putting up my patterns. To be honest, most of them will not be going up. This is because a lot of “my” patterns are just modifications others’ have made due to either me wanting a different color or wanting to change the design up a bit. So, I don’t think I’d have permission to. If there is a design you want though, I can link to the person’s blog–just realize it will vary a bit over what I use. 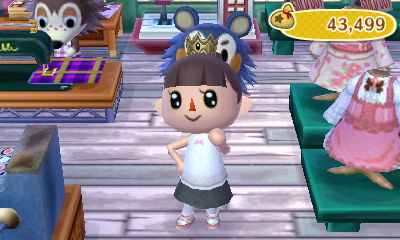 When I swapped a design, it caused her dress to disappear since it was what she was wearing. The “undergarments” are cute though–I love the pink bow on the tanktop.

Picking up my Toaster~ 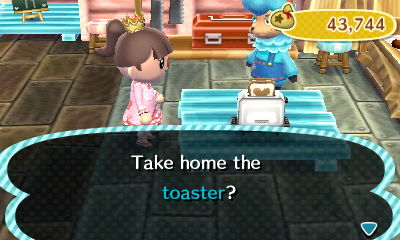 After that, I took a small break to continue waiting for my needing to be prepared 3DS to be picked up… Upon getting back, I had received more mail. One being the Gold Plaque for hitting 70,000 points in the HRA/HHA 😀 Yaaay. 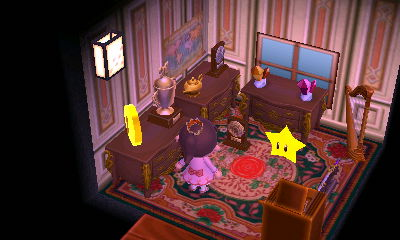 I then went to put some in storage and well… Unfortunately, I was then given a terrible surprise… I had found a way to get my old 3DS to work so I could play on that instead of my boyfriend’s… Unfortunately, I only noticed the time was wrong after I inserted the game. Despite not loading it up, apparently that counted (although, my town is fine. Nobody missed me, nothing has changed, everything is 100% okay, the date was correct, etc.) and thus, they all rotted. That’s over 90K down the drain :/ And a good chance at the badge too. Kind of want to go cry now.

Regardless, I decided to go drop something off at Re-Tail to be refurbished–A Festival Lantern. It’ll be the first I do with a custom pattern. 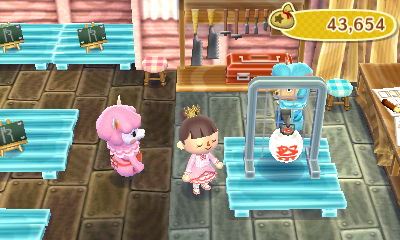 I then went off to work on patterns. I have a lot of plans and it’s really what I plan to focus on while my 3DS is away. I ended up only getting the museum exhibit signs done though…

It also took hours so despite having two more things to customize, after picking up the Festival Lantern from Cyrus, I could only give him one 🙁 I gave him the Chaise Lounge first…

Shall do the Apple TV tomorrow.

I ordered some more Glass Display Cases before T&T Mart closed… and that was really it. I don’t want to do anything with the Dream Suite as to make sure my code doesn’t change and my villagers still have yet to request anything I want so bleh…

Mark stopped over to pick up some stuff I had for him. He also gave me a Ruby and a Popcorn Maker-thing. Then I went and wrote some letters to villagers and that was about it for today.