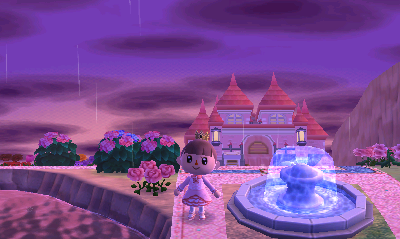 The town sure looks nice during Sunrise too…

WHAT THE HECK IS THIS. 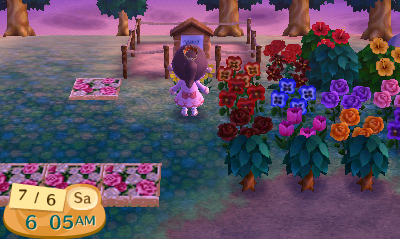 I honestly want to cry. For those wondering, the person moving in is Phoebe. She only killed two carnations (pink and white…my only white left actually now that I think about it :/) and all the new bushes Eclipsed gave me…. now I’m even more upset…

I even tried immediately resetting but nothing. I practically want to just throw the game. I’m really upset about this. Half tempted to have Tammy stay now after seeing this happen. I just.. ugh. I don’t think there are enough words to explain how upset I am. If someone just requested the Flower Arch and Fairytale Clock already, this wouldn’t have happened. I hate how public works work. And I hate how they can move anywhere and it’s a STUPID THING TO DO. Just… god. The day JUST started and it’s already ruined.

On the bright side, I guess I don’t have to worry about finding a new big sister villager? …I’d rather find a new one. God, my eyes are burning now >< I know it's something stupid to cry over I mean, I didn't lose much but... .__. Ran into Saharah. Figured may as well make my day better by getting ripped off by her! 😀 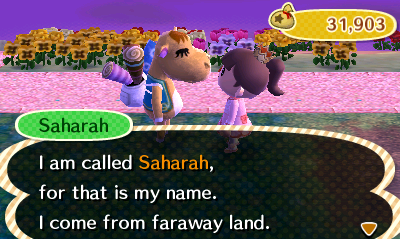 Received Classic Wall and Classic Carpet :/ It looked nice with the set but… nothing unique. 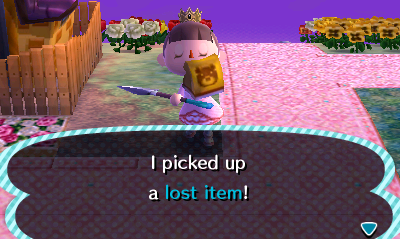 Can’t even find myself getting excited about detectiving though. :/

And it belonged to Kiki…who’s house it was right next to…and thus the first person I asked. 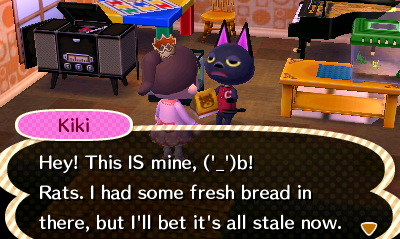 How exciting. 😐 She gave me a Black Track Jacket. This is the third one I’ve gotten this week. 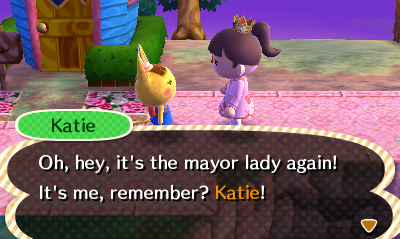 Brought her to my boyfriend’s town.

And then, if the day couldn’t get any worse, I accidentally dug up my only Purple Pansy while getting rid of a dead bush. I hadn’t saved so I couldn’t reset and just…ugh. I just can’t deal with this right now. So so so upset :/ Shall have to see if Chananr or Rainy may have an extra I could buy off them or something. And maybe a spare white carnation if I can’t get one to grow…

Pete ended up being at the cafe. 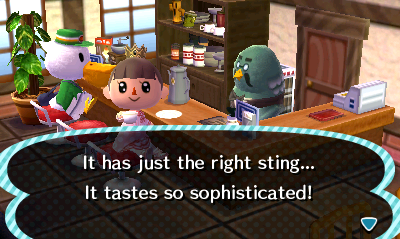 ^she’s crying on the inside. 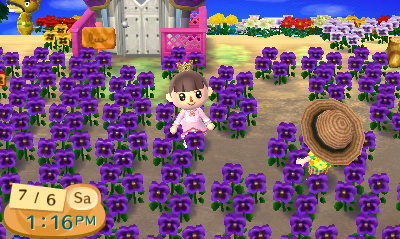 Thank you again. He let me shop a bit too to help cheer me up <3 At the very least, I've stopped crying now more or less--though, my eyes hurt. Seriously though. 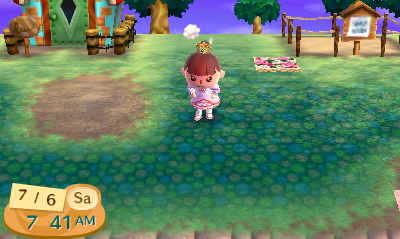 They need to get off my estate property 🙁

Got to go to a friend’s for fireworks :3 Yay~ 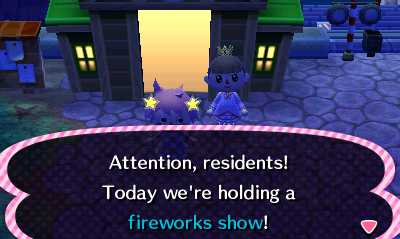 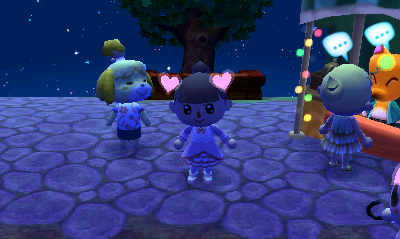 I only need Star to complete the set. I really love the fireworks.

I headed home about 10 minutes later and went to Re-Tail to pick up my refurbished Boxed Figurine :3 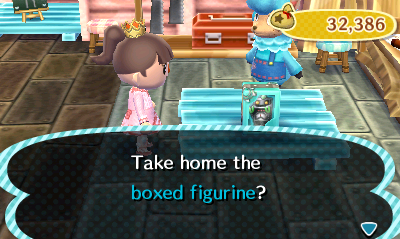 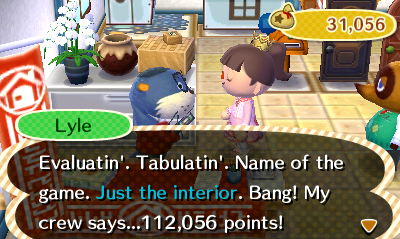 He apparently moved from a town I traded with…despite not speaking to anyone :/ *sighs*

After doing my usual shopping (and noticing that for some reason Melody Paper doesn’t show up in your catalog), it was past 12 so it was time to visit Dr. Shrunk. 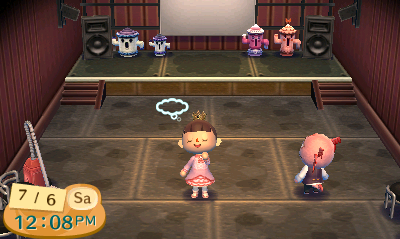 And then I took a break since I hadn’t slept yet and was still pretty down from the issues earlier.

I hate when I take breaks–they rarely make me feel better and the last thing I feel is a bit happier now :/

Anyway, I was going to head to the island, but Jessie invited me over to see her town. 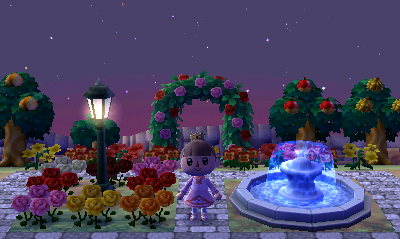 She’s been much luckier with Public Work Requests than I have (which I’m especially frustrated with right now due to the lovely house I was greeted to.

She gave me a Stained Glass so I took it to Cyrus: 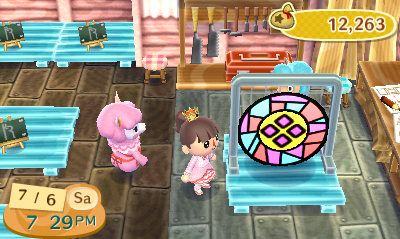 Have a few things planned for them so will be ordering more:
Outer A + Shirt Design – and just realized I forgot to leave this as is so will have to re-do it…
Outer B + Inner D
Outer D + Inner C
Outer E + Inner E
Outer F + Inner F
Outer G + Inner G

After placing an order for 5 more, it was then time for a quick trip to the island. 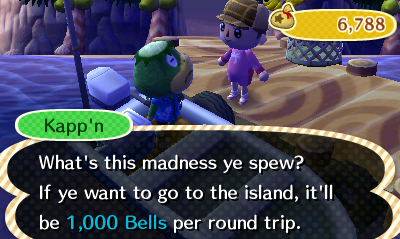 Despite not really planning to do minigames, I put on my trusty outfit just incase… I need to be fast though. Club Tortimer ended up being pretty awful so I headed back rather quickly. 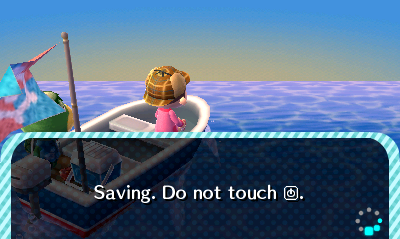 Not really a bad thing since I don’t have time to be doing a lot of island hopping. It was then on to my own island. Which was also awful and the minigames weren’t great so yay for finishing quickly 😛 I did decide to at least catch something to make up my boat trips though. 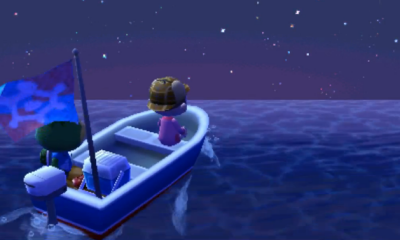 I know some people suggested stealing tons of flowers for helping get a perfect town out of the way… I’m tempted since I’d only want it for a day anyway, but I already have enough flowers I will need to get rid of–I’d rather not dump more :/ Decisions… Just wish I could have enough of the flowers I want and my villagers would request the Public Works I want. v-v

It was then off to K.K. Carina came too.

It was then a small break as Ruu invited me over to Tanabata 🙂 I was really happy to be there, but I just feel so miserable today :/ 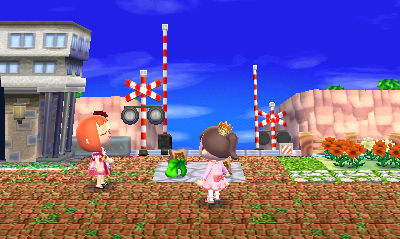 I also brought along the Cat Tower I had for her <3 I also met one of her friends, Rui~ 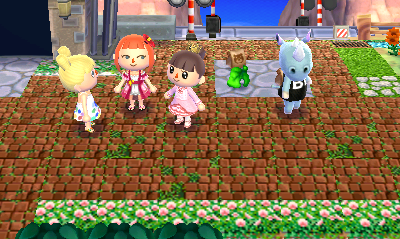 And we took pictures :3 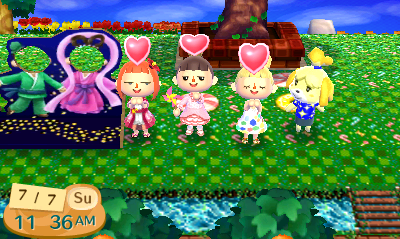 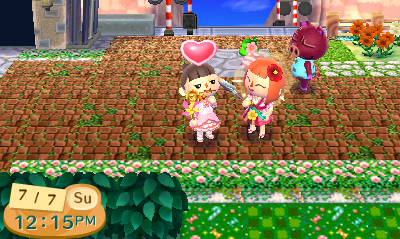 Then we went to the island! 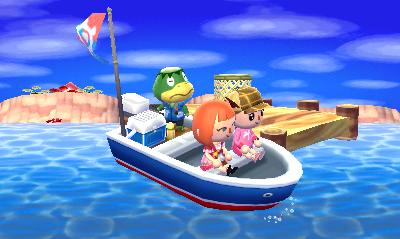 Thank you so much for the wonderful time T~T <3 I was going to go back to K.K. after, but even though I made it to the Club before it closed, but he stops playing at 12 regardless... so looks like the badge will have to wait another week 🙁 I made sure to stop by StreetPass (got Vanilla Ice Cream and a Tweeter), but that was it for today. I would've liked to do some Dream Suite stuff, but just not feeling well. I did check the island after midnight--unfortunately, still no good items. Also, if the list I read is correct, there are no more Club Tortimer exclusives I want/need so I may just stick to the normal items... ----------------------------- Day 6 Redux: You with K.K. Slider (they changed it :P) 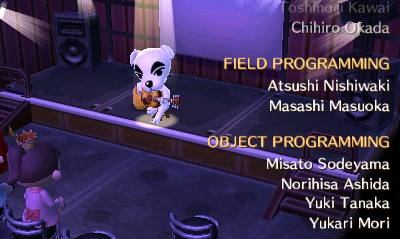