So, today was normal enough. I received my Stained Glass along with a letter from Katie (with a sketchbook) and a letter letting me know Jeremiah’s birthday is tomorrow. I went and ordered a Blue Wall for him.

Rocco was at the Cafe today. 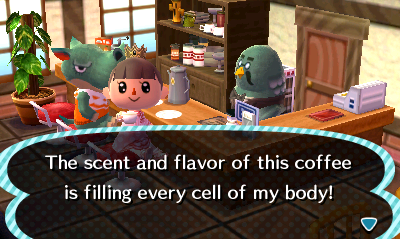 But the best part is I unlocked Part-time work!

So excited to start that tomorrow. Unfortunately, since I have to go work again, I’ll either be streaming without sound or not be able to stream it 🙁

Picking up the Stained Glass… 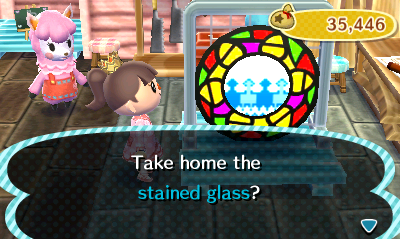 …Which I then immediately gave back to him because I screwed up the outer rim. I never really mind though since it just helps towards the badge.

I managed to breed another White Carnation! I also found out 2 Pinks won’t breed a Pink Carnation so leaving the white with them and hoping for the best… 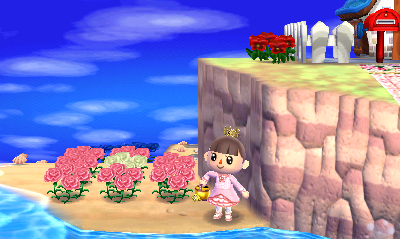 I also found out I can’t do Pink Lilies or Pink Roses (though, I swear I’ve gotten Pink Roses this way…) that way either…so umm…lots of fixing. 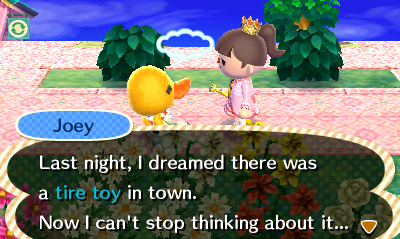 Picking up the right Stained Glass… 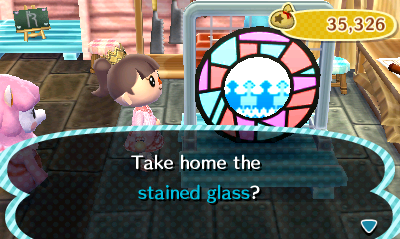 Time to do the next one!
Stained Glass Check list: 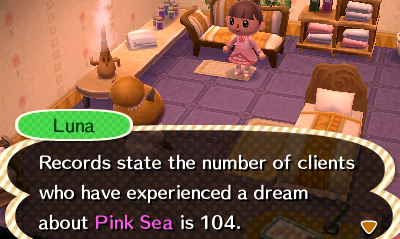 104?! Why so many people T~T I also stopped by Streetpass, but nothing new again. Not sure what I haven’t gotten yet… should work on that. ._.

Despite being super frustrated with her, I went and greeted her anyway. 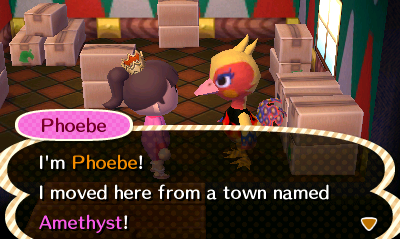 She’s from Junri’s village. I think I’m going to add a rule “if you have a villager moving, we are on no visitations temporarily”. 😛

Speaking of Junri, I went to visit as she had a breadbox for me 😀 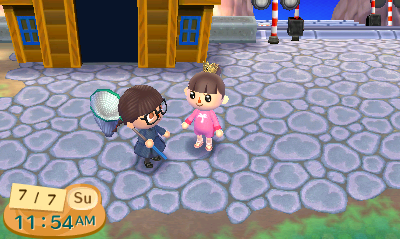 Yaaay~ I also stopped by my boyfriend’s village to drop stuff off.

After stopping by places, it hit 12PM so I went to see Dr. Shrunk. 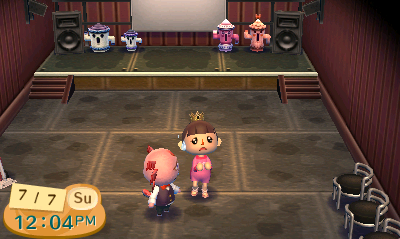 After clearing the shops out, I picked up my next Stained Glass. 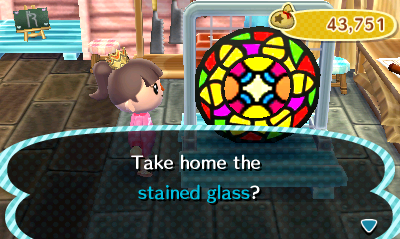 After doing a bit of item switching and getting my bread box into place, Andy gave me some tips with the “Villager Bling Theory”, thus, I spent the rest of the time doing that. 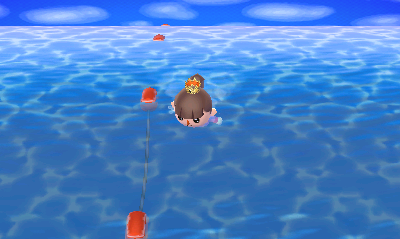 Bling tally!:
Trip 1. Rocco asked about Spaghetti tastes.
Trip 2. Kiki asked about what drink to go with the dish she was making.
Trip 3. Cityscape Wall from Kyle
Trip 4: Rocco had me return a gift to Miranda.
Trip 5: Astrid gave me a modern desk

I then took a moment to pick up my Stained Glass… 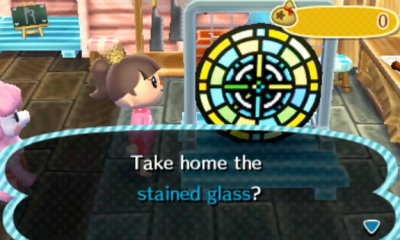 And give him another~

Trip 6: Rocco asked if he could call me Princess too.
Trip 7: Joey asked if I prefer the Ocean or Mountain.
Trip 8: Rocco gave me a Ringside Table.

Picked up my next stained glass… 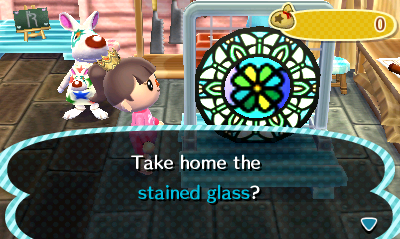 Only one left after this next one.

Trip 9: Kyle gave me a Polka-Dot Table.
Trip 10: Joey asked if he could call me Princess as well.
Trip 11: Rocco gave me a Basketball Hoop.

I decided to stop at this point 🙁 At the very least, it does seem to force a bling, but still no luck with a Public Work… whether the one request a day rumor is true or not, I do not know :/ 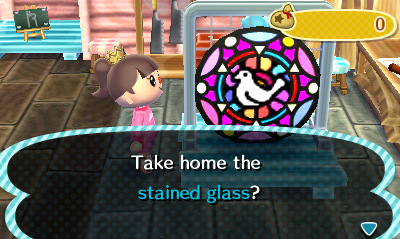 Dropped off the last one 🙂

I then stopped over at Sosostris’ Japanese town for Tanabata <3 A few of my friends have wanted the Bamboo Grass so I wanted to pick up an extra as a gift.

It was actually my first time in her Japanese town, Kasen. We got to shop a bit too :3 I’m hoping I can catch someone’s Gracie with the only Gracie Series item I like–the Gracie Shelf (not that I have room where I wanted to put it anymore..). Unfortunately, I have yet to find someone with it despite finally being able to afford it. Regardless, I didn’t stay too long–I knew a lot of people wanted to stop by afterall.

Picked up my last stained glass <3 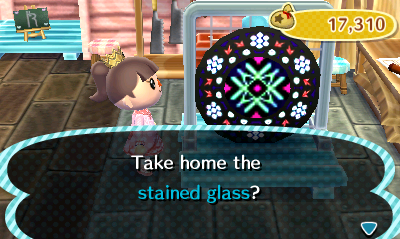 I did a quick stop at the island to go catch a shark for Day 7. 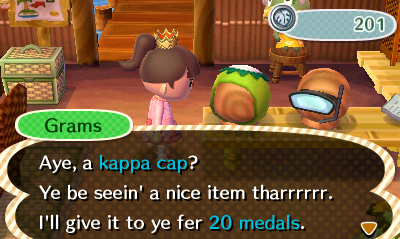 There was a Kappa Hat in stock so I decided to pick it up as the Kappa outfit is one of the rarer items. 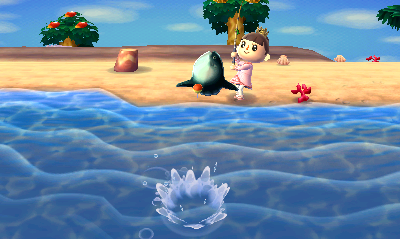 After some failures and Sunfish, I did eventually get one and then headed back to town.

I then decided to do the Dream Suite. Herrmarvin asked me to go to their town (There were two Maville’s, but I’m guessing there’s was the one with “Marvin” so I picked that one…) so I decided to go there first: 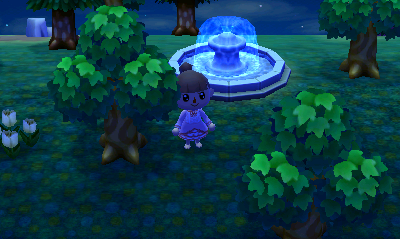 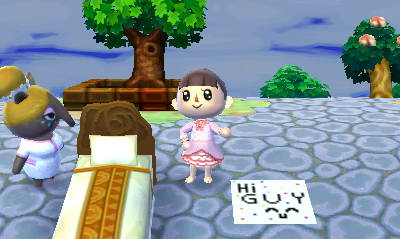 …despite the weird face boards I don’t understand, they did have Merengue. Please come to my town, Merengue. 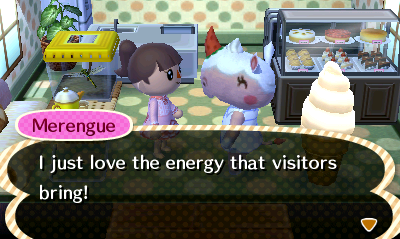 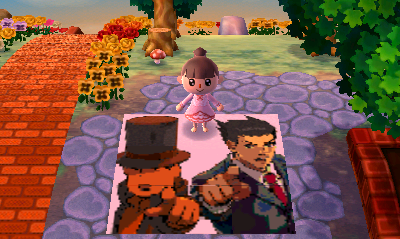 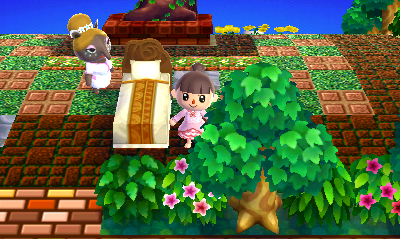 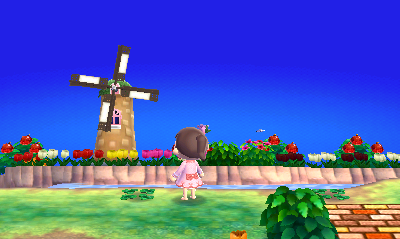 And that was it for today~

Bonus note: Apparently I have gotten all the Fortune Cookie items now when I finally got the Hero’s Boots yesterday so yay~ No more needing to spend play coins.

Day 7: You catching a shark 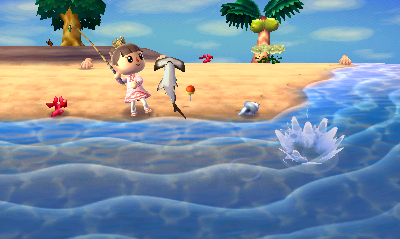