I actually had no mail which was…really weird. It’s been a long time since I have had no mail. Regardless, it had been several days and today was “re-try for the Stump I want” day. Unfortunately, in front of my house was Redd’s leaf :/ So another failure. And I received the orange by the campsite so a failure there too 🙁 *sighs* I won’t be looking forward to trying to get the specific pine tree stumps I want near my bench… 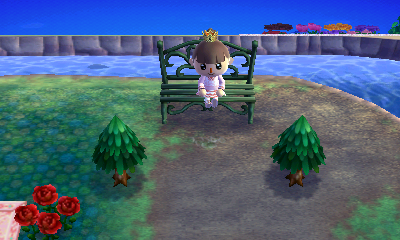 I finally have my first bench! So excited 😀

As I continued my fossil hunting, I found a lost item. 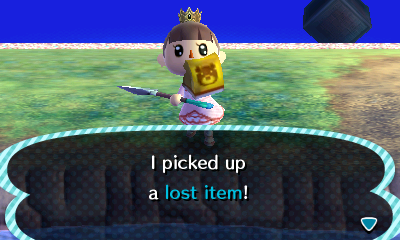 Kiki was the only one up so I went to ask her first. It wasn’t hers though, so it looked like I’d be carrying it for a while…

Due to continued frustration with finding my last fossil, I decided to celebrate my new (and only) bench. 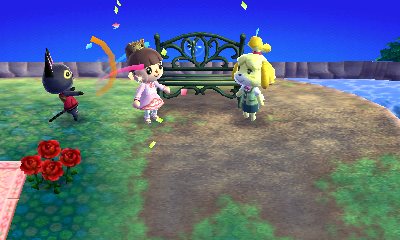 I will do Katrina’s project if I get another awful Public Work suggestion.

Unfortunately, I managed to fall into the pitfall I had been keeping hidden as I looked for the last fossil.. I thought I found it, but it was just a gyroid 🙁

After who knows how long though, I did FINALLY find my last fossil. And also stopped at the Cafe on my way to Blathers. Unfortunately, I had all these fossils AGAIN 🙁

With daily chores done, it was now the “wonderful” task of waiting for Re-Tail to open and everyone else to wake up…

The lost item ended up belonging to Joey…but apparently he put it down purposely because he got tired of carrying it 😐 He gave me a bubble tee as thanks. As it hit 9, I also found I now had some letters from villagers, out of the 4 I sent, 3 gave me gifts. Rocco gave me a Floral Wall, Ruby gave me Ranch Flooring, and Miranda gave me a Reggae Tee.

Before I could even get started on my “try to get specific requests” idea since Ruby was still in Re-Tail, Kyle gave me this “lovely” request… 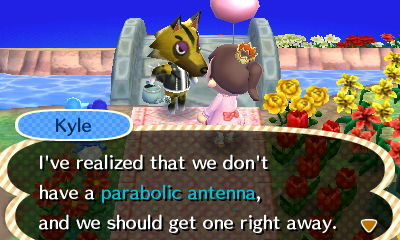 …so, time to go build Katrina’s place. I’m actually pretty frustrated since he can’t even request anything I want anymore. Wish I didn’t even talk to him :/ I mean, there are stuff that anyone could request that maybe he could’ve suggested (Like the Lighthouse or Police Station) but still pretty upset about it. v-v

As per usual, I paid off Katrina’s fortune house immediately so I am looking forward to seeing it tomorrow. This means my Main Street will be complete–even though I still have some Nookling upgrades to go.

I managed to get Sleepy from Dr. Shrunk today. 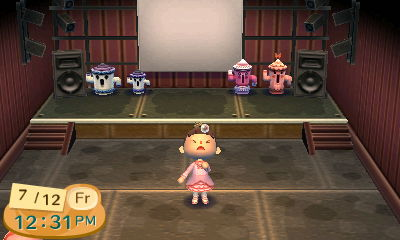 And not too much happened otherwise–besides more flower taking from the island anyway. 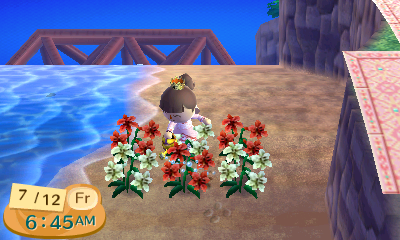