Video Log: Twitch
Re-tail Sign: Hat
Turnips: Joan was selling today, but I didn’t see for how much.

Had mail from Rocco, Kiki, and Phoebe. Rocco sent me a Time Clock.

As I was browsing around looking for my last fossil, I ran into Phineas today 😀

Yaaay~ Still not the badge I was expecting though.

Yay! My money tree was successful 😀 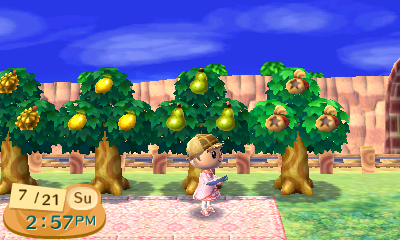 Dropping off my Azalea Stool at Re-Tail for refurbishing <3 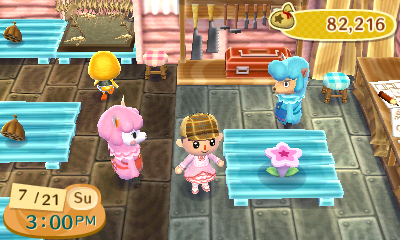 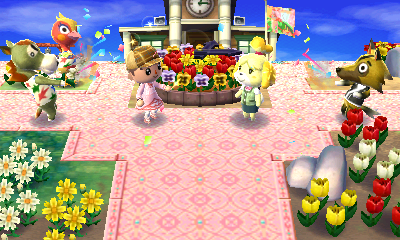 Dr. Shrunk time! Normally, I don’t post his jokes but… 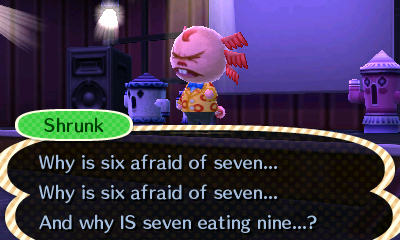 This line amuses me a lot and I’ve been looking forward to finally learning the Mistaken Joke. XD I get the joke/riddle, but when it comes down to it, I’d love to know why six is actually thinking 7 would eat 9 in the first place. Anyway, yes, Mistaken Joke!: 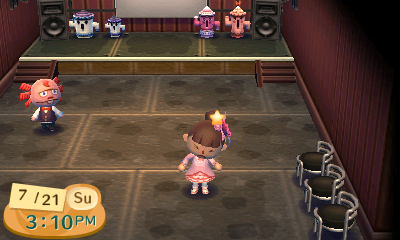 Picking up the Azalea Stool~ 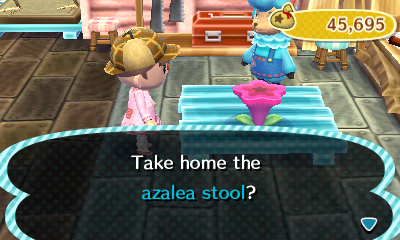 After buying out the shops, I then dropped off a Chocolate Fountain at Re-Tail for refurbishing: 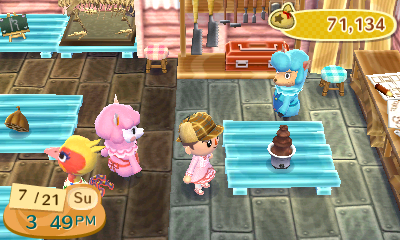 I made sure to order a bunch of things by 5, but unfortunately I ordered more than 8 so some still won’t arrive until tomorrow 🙁

Picking up my White Chocolate Fountain~ 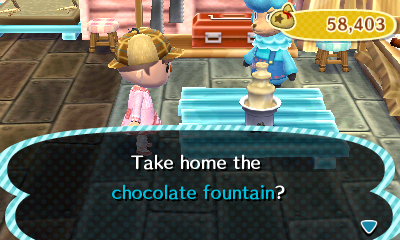 DARN IT KYLE, STOP REQUESTING EVERYTHING. 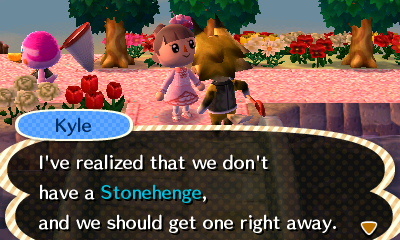 This was another I wanted, but didn’t make the final list :/ Regardless, I should know better about talking to him when he alerts at this point… *sighs* Oh well, Town Hall Renovation–here we come. 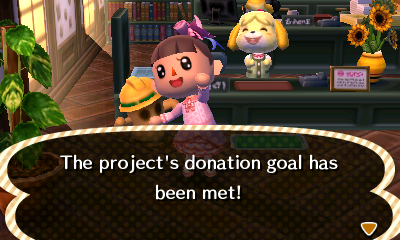 Paid it off immediately so looking forward to seeing it finished tomorrow.

Rocco gave me a Mountain Bike for helping him get better. 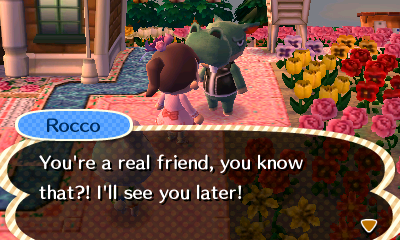 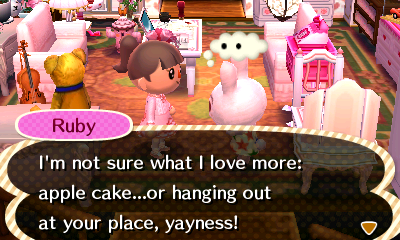 Anyway, Carina came over to sell some stuff… And the finished Cloud Lantern: 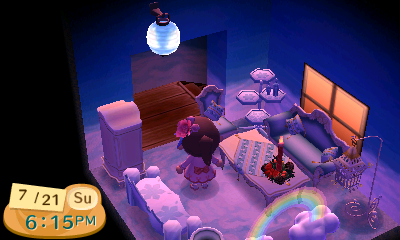 Since I couldn’t really do anything while Carina was selling things, I decided to work towards my fishing and catching a lot badges.

Another lantern picked up: 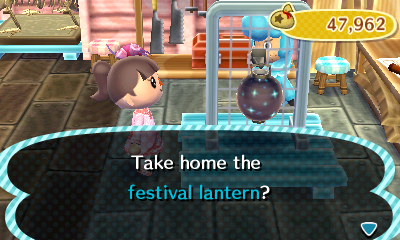 I then decided to do a Dream Suite real quick since I heard there was another Pink Sea so…
If you watched the Stream, you may have noticed that my “Pink Sea” does not show up. This is because when I was making my town, my touchscreen was broken and I could not use the “a”… Thus, I used the “a” in Line 6 of More. It looks just like a normal “a” afterall–unfortunately, this means my town can not be searched for (unless you use the “a” under More anyway) since there are no partial searches. I’m sure “Jennifer” is a common name so your best bet is to just use my Dream Address. (or well, maybe “Seamstry” could help) 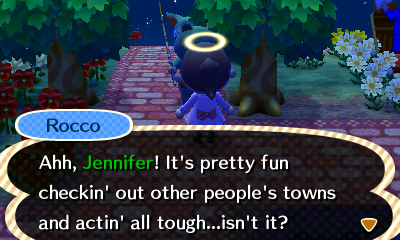 It seems villagers who live in your town act differently than other villager’s in a dream town… That’s kind of neat. 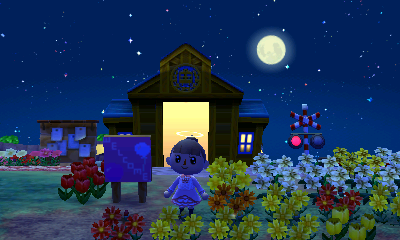 It seems random town is now working, well, maybe… it sent me to Nintendo village. Not sure if she will always send there or what XD Regardless, since I’ve been there before, I just headed back.

Picking up the last Festival lantern until tomorrow: 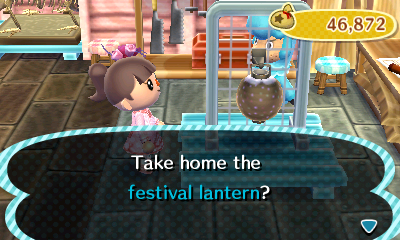 Gave him the Wall Paper Lantern to do next.

And picking it up…. 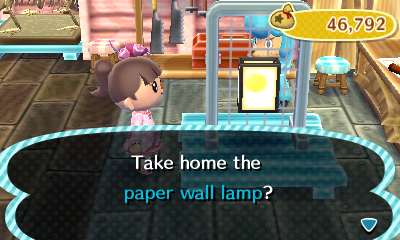 Next is the Mountain bike~ 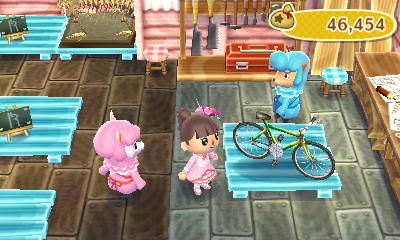 Picking up the bike :3 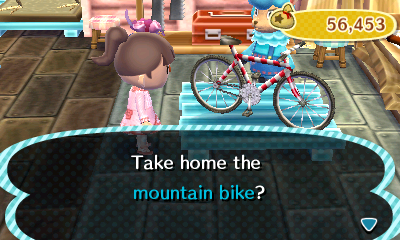 Exotic End table is next~ 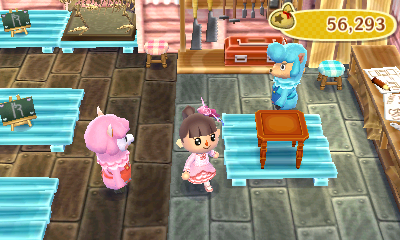 It looks really strange… and I then realized I didn’t need it so I decided to just sell it. 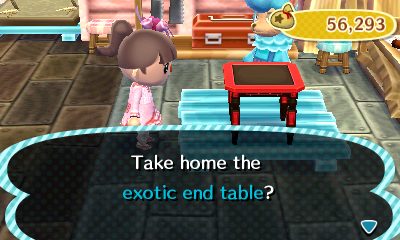 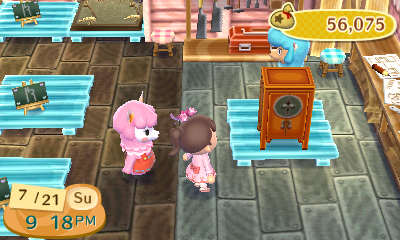 Let’s hope it looks better than the end-table or I’m switching it back <_< Anyway, after a full museum tour of reading every single exhibit (I miss Blathers' blathering...) I went to Imaginos' again~ 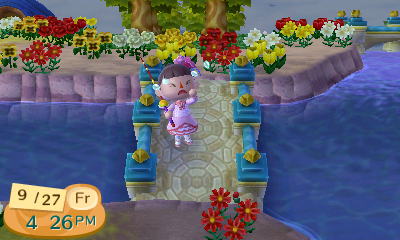 His bridges taunt me. Regardless, we had lots of catalogging fun so yay <3 ---------------------- RANDOM COMMENTS OF THE DAY:
As by the title, these will be random comments and thoughts–usually triggered by a conversation on Twitch or Skype.

1. Facility remodels – Rainy mentioned how it’d be neat if the Cafe had different models. I think this would be awesome–or even as a final reward from working for Brewster. I think it’d really make the town’s special (and reasons why villagers would even go to your cafe from outside your town) make more sense too. But I’d love this for other things–like I don’t care too much for either Police Station (and I can’t even pick the one I prefer more because the idea of Copper in the Lost and Found is weird to me), but it’d be nice if we could even upgrade the Police Station to have both dogs and/or change the appearance. Even a nicer look for the Reset Center once you get Resetti’s photo would be pretty neat.

2. T.I.Y. is not too far away! After doing some calculations, I should have the message of them closing tomorrow (to close on the 23rd) and have it built on the 24th. Yaaay. I’m so excited! Should hopefully have Gracie next month then.