So today is Father’s Day! Happy Father’s Day 😀 I received a Red Carnation in the mail celebrating and also got a letter from Tammy. Her birthday is apparently next Sunday (the 23rd) and I have officially been invited. Need to find her a Modern gift… 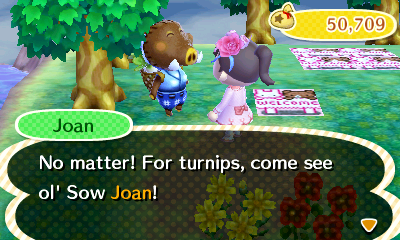 Joan ended up being close by. I decided to buy 100 again because I hate myself. If you have anything 108+, let me know. Sure, that’s only 1 more than I bought, but waiting until the last second scares me ._.

Hi Pudge :3 I know I could play a game, but I’m really nervous about space right now and don’t want new villagers this second.

Getting my Balloon Dog Lamp in Blue today~ 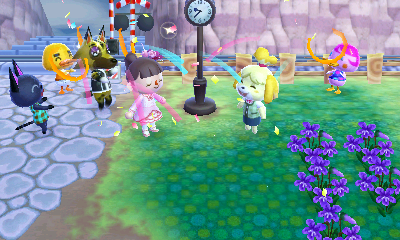 I decided to build the Well. Placed it next to the Town Hall–I think it looks nice. 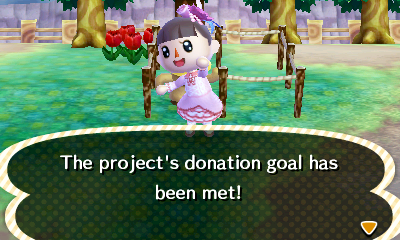 Also paid it off. I wanted to do the Dream Suite, but she still isn’t Sleeping…

I feel like my days are broken. It doesn’t seem anything is unlocking when it’s supposed to and I’m not sure why. This is technically my 9th Day of Playing, but it just doesn’t feel that way. 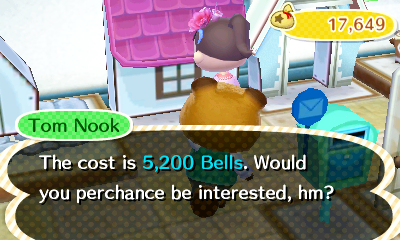 …I REALLY miss the pink roof from the previous games :/ 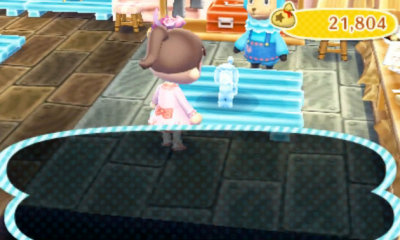 After selling a bunch of stuff from the island, I managed to make a little bit more than enough to pay Nook back. However, I am now poor 🙁 *sad* 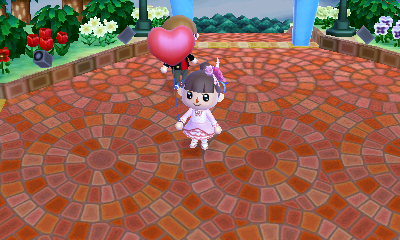 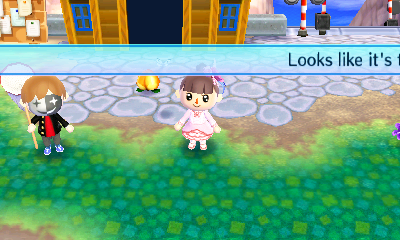 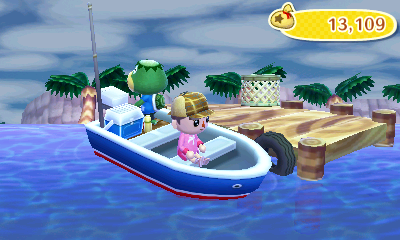 …and then to the island to check the items.

Stopped at Club Tortimer first–as the internet there will be iffy so I figured it’d be better to get it out of the way. 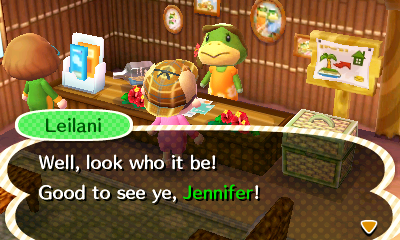 Someone was there…but I think they were just lurking. Items were awful though so I hurried out. The items on the normal island were pretty much just as bad. Although, I suppose some people may consider me lucky for having a diving suit almost everyday…

But yes, shall hopefully get to play a bit later too. Really need to earn more bells and stuff 🙁 And still need a Gar, a Char, and a Tarantula to finish up June…

Although, I suppose it wasn’t much of a break since I eventually decided to play in the car thanks to my handy dandy car charger. I figured it’d be a good way to try and get some requests by just leaving my 3DS on. It did work–Kiki requested an Apple (OFFER A PUBLIC WORK, KIKI. She gave me a Wall Fan as a thank you) and Tammy requested a Wind Turbine. Wind Turbine was another one that sadly didn’t make the cut–wish she offered one of the things I need.

I also streetpassed my mother… 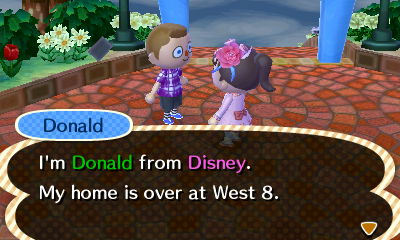 Received a gift from Ruby for giving her a Butterfly… 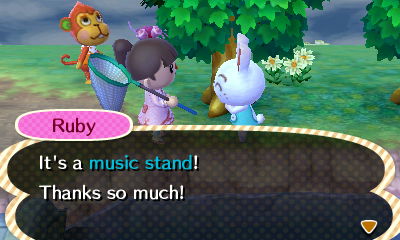 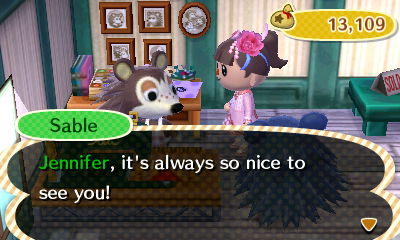 And if that wasn’t enough, I had a rainbow in my town! A DOUBLE Rainbow! I’ve actually never gotten a rainbow before–let alone two so I was really happy. 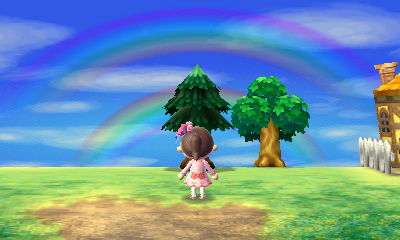 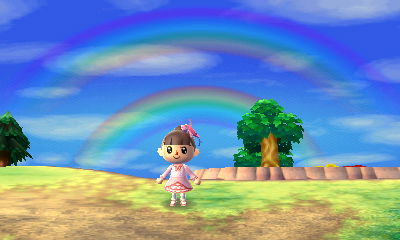 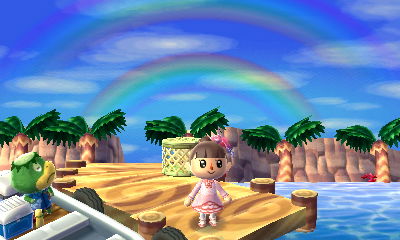 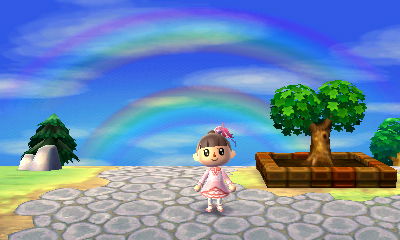 And probably took way too many pictures.

I also had some fun with tools and expressions because I was just way too bored in the car. 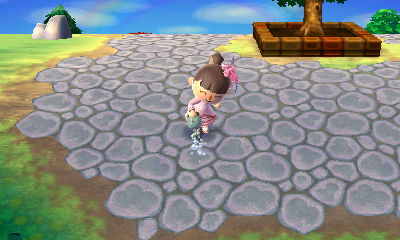 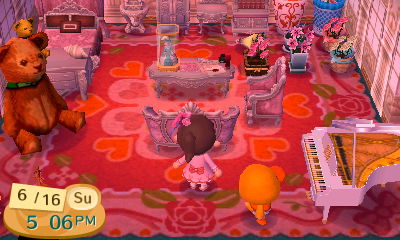 He didn’t stay long though.

The big accomplishment though? I finally caught a Char! I was very surprised. I had been getting frustrated and went down to the beach to throw my fishing rod. I couldn’t even see where it was so I had no clue if a fish was there or not–times like this make me wish I went for a South waterfall (they are prettier too). Anyway, I suddenly heard the sound of a fish poking at it so it really caught me offguard that I got it since I had to go solely on sound. 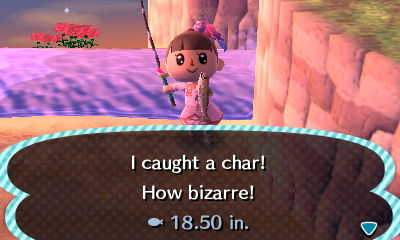 For the record, I’ve often played Animal Crossing games without sound so having to do it with JUST the sound was really new for me. But yes, so happy I got it! Now I only have the Tarantula and Gar and I’m done for the month. 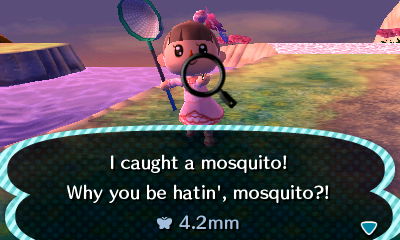 Joey also invited me to play Hide and Seek. I actually never have been asked before so it was cool. I had some issues finding Joey, but then decided to check the beach and that ended up being where he was! 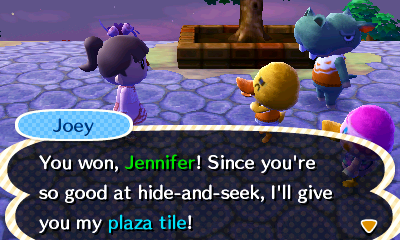 I received a Plaza Floor for winning 🙂

Blue invited me over to pick up a Regal Bed and Lamp she didn’t want. Thank you, Blue!

Bed is currently being customized–it’ll be done at 8:07PM @-@

I then visited my mom’s town to drop off some fruit. 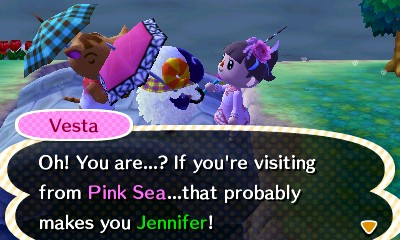 I ran into Vesta–one of the villagers I want to have in my town in the long-run. Also got a Swell Tee to give to Tammy on her birthday. 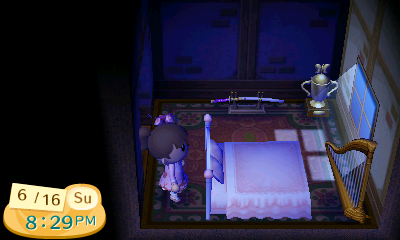 Dropped off the Regal Lamp. Will be done at about 8:55PM. Also dropped off some pants at my boyfriend’s town. He hit me with a net again XP

I had gotten the Regal Lamp with Pink and Gold, but it really wasn’t very noticeable/as nice ingame as I was hoping… 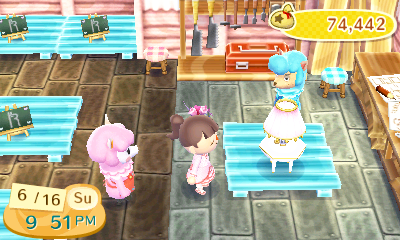 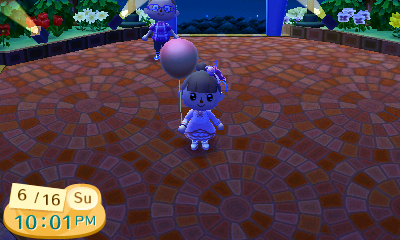 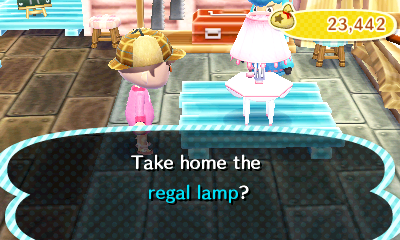 …Despite the pink being more obvious now, I do think it looked nicer before so I went back to the pink-gold look. Oh well, at least this counts towards the badge. Unfortunately, I won’t be able to grab it until tomorrow now as it’ll be done after they close
I don’t think I’ll make anywhere near the amount I need though :/

Why must earning bells be so hard T__T

YAY I GOT A FLATWORM 😀 Looks like it was possible to get on the island afterall! Back to Bug/fish catching. But first… since it’s after midnight, I decided to do some minigames. Even though the shop items don’t, the minigames switch over at midnight soooo 😀

YELLOW VIOLETS AND YELLOW LILIES ARE WAY TOO SIMILAR 😐 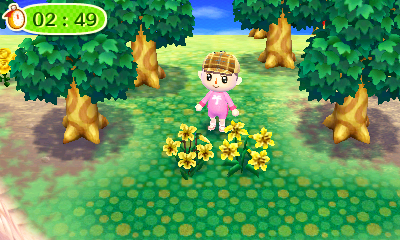 At least the icons are really different, but ugh. I have noticed some of the Elite ones are incredibly hard alone though.

Okay, first the Flatworm and now this? 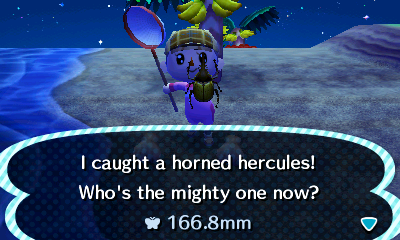 Yeeeeeeeeees. Being a paranoid person, I decided to make a stop to donate both of these beautiful things before going back to the bug/fish catching. Unfortunately, it was really getting too late so I didn’t manage to get back to the island :/ I did spend some time looking around my village for a Gar or Tarantula but no such luck.
I still feel really accomplished though <3 Random note: I have to say, I find it neat how some of the commentary upon catching certain things changes when you catch it multiple times.