Before I start, I am happy to say Comments now work! Not sure when or how they broke, but yay for them working again.

Mornings are a bit slow now in Animal Crossing with the only things I really need being out in the evening (although, I think I have an hour to find a Gar…but that’ll be the drive to work). 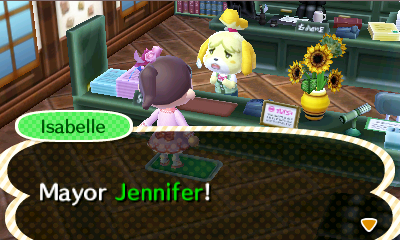 SHE WAS ASLEEP! YES!

SO BUILDING THE DREAM SUITE. I pray I can open it up today, but I honestly don’t know. 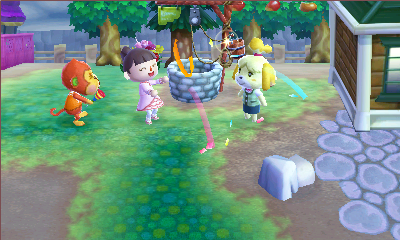 …Only Flip is up? My feelings feel hurt 🙁 And then Flip gave me a Relay Tank. Thanks, Flip.

TIME FOR DREAM SUITE. It is actually only 234K–cheaper than I expected so I should pay it off today! Tomorrow will be breaking in the Dream Suite (so I will probably attempt to stream it). Expect to see me for 50+ Dream Villages >3 if I have the like…25K+ to pay for them anyway.

I stopped by for StreetPass (MORE BALLOONS) 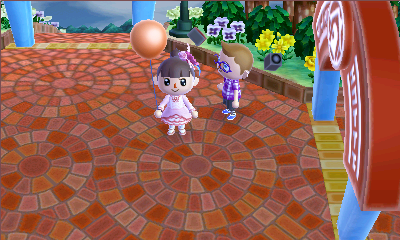 …and then took a small break for the drive to work @-@

I found Katie in my town today.

On the way to take her to my mother’s town though, I spotted a fairly big fish… 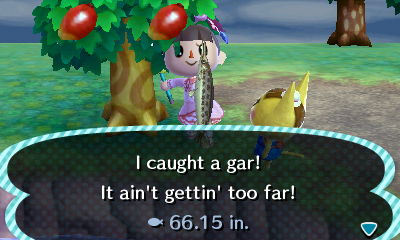 GAR. 😀 YES. Now just the Tarantula to go! Looking forward to what I get from Katie tomorrow too. 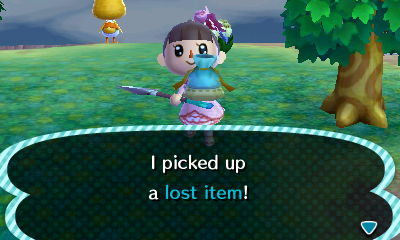 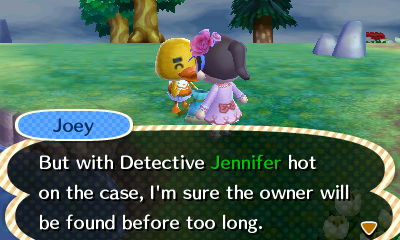 Ruby wanted a Shark, but I told her no. I just need the bells too much right now 🙁 Also still need to find my last fossil. So, decided to take a quick pause from trying to find the lost item’s owner to donate to the museum.

I also stopped by Nookling’s today and they had the Lotus Lamp 😀 yaaaay. 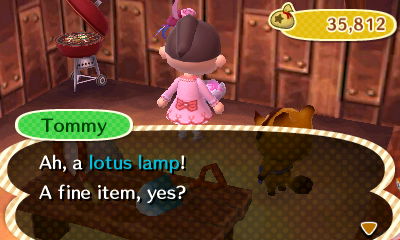 I haven’t decided if I want to get more for multiple colors or not yet.

Anyway, after donating, it was off to sell stuff to Reese! And pick up my Regal Lamp…again (pictures in Day 8).

After selling some stuff, I officially had enough to pay off Dream Suite. 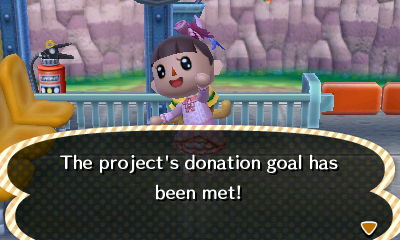 I know I probably should’ve focused on the next Nook loan first (though, since I got an exterior change, I think I may not even see the loan until tomorrow) as I have to visit him for the “completion” alert, but I really really REALLY wanted the Dream Suite. I now have like 50K to my name.

It was then back to finding the owner of the lost item. It wasn’t Joey’s Ruby’s, Miranda’s, or Kiki’s so with my detective hat on, I went to continue questioning the last 4 suspects.

With Flip not in the village area and Tammy still sleeping, I headed to main Street to look for him…and maybe do some shopping.

AGAIN?! WHY. WHY DO YOU KEEP DOING THIS TO ME.

Anyway, I got my 348K loan from Nook that I get to start paying tomorrow… it’ll make it so I can get a special house exterior so need to save up 398K for that. Guess who’ll be doing some hardcore island catching for several nights?

After finally finding Flip in the museum, it left just one person… Tammy. Time to wait until she wakes up. 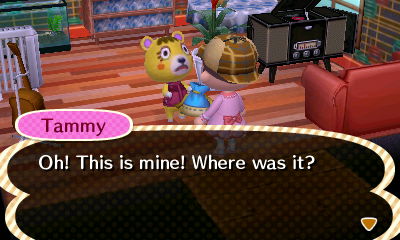 So after 20 minutes of waiting… SUCCESS! I received a fan as a Thank you. And now, it’s time for standing around and hoping for requests. Things that happened during the standing around:
1. Ruby asked for something for her house. Gave her the fan–she gave me a Kiddie Couch.
2. Kyle asked to see my house. 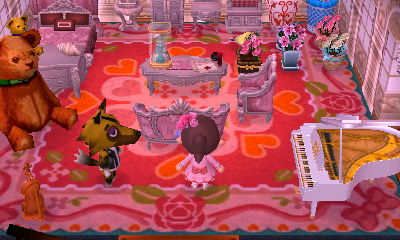 Speaking of my house… 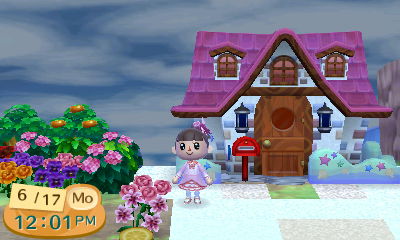 My lovely new roof and bushes 😀
3. Ruby asked for a dragonfly. She gave me a Strawberry Tank as thanks.
4. Flip asked to see my house… darn it, ask for public works! Not to see my house! 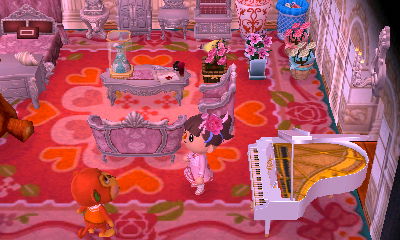 I then took a moment to go send some mail… they say nothing since I can’t type anything…and both went to Rocco since I can’t go to the next page ._. I hope he likes what I sent.

Now back to waiting around…

5. Joey had me deliver a present to Rocco. Unfortunately, another guessing game… It was clothing and I guessed furniture so I received nothing.

6. Tammy invited me to hide and seek. Her, Joey, and Flip. 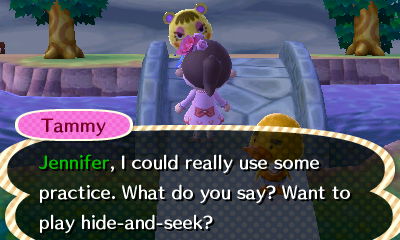 I quickly found them all and also ran into Pete again. I received a Paper Wall Lamp 😀 Eeee~ 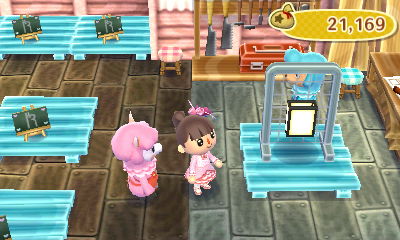 I immediately brought it over to Cyrus to get the Cherry Blossom Design on it. So excited!

Should be done at about 6PM <3 Once I got back to the hotel, despite my lamp being ready, I decided to head to Club Tortimer first to get that out of the way ASAP and I hadn't been to either island yet. Thankfully, I was alone so I was able to quickly go back before heading to my own island to see what was there. There wasn't anything good on my island either unfortunately, but I decided to play Elite Scavenger Hunt as it's my favorite and I could use the medals. ...I accidentally picked the matching game on Elite. I did it this time though! 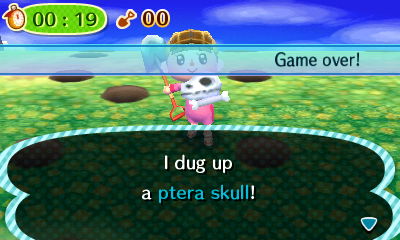 Then I made a nice amount through the Scavenger Hunt 🙂

I then stopped by Re-Tail to pick up my lovely Paper Wall Lamp. 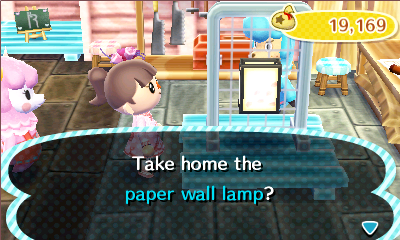 So cute! <3 Then I headed to Blue's to get the Tropical Vista Wallpaper <3 Which will be used in one of my themed rooms.

She also gave me a Regal Sofa 😀 Which I immediately took to Re-Tail to be customized. 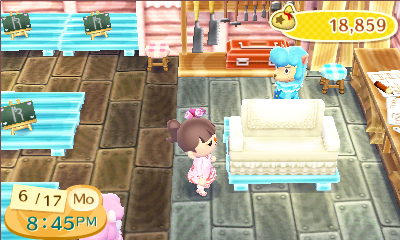 It shall be pink (honestly, this probably isn’t even surprising at this point) <3 AND THEN I CAUGHT A TARANTULA 😀 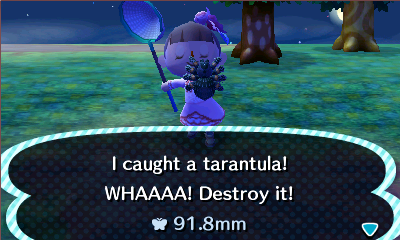 OMGYAY. I am done for the month!

I ended up getting a surprise visit T~T With some really crazy gifts… Both 7-11 Sets and a Crown! OMG. They also gave me a gold tool set T~T Not even sure how to react to that or even if I should use them. I FEEL SO CONFLICTED. 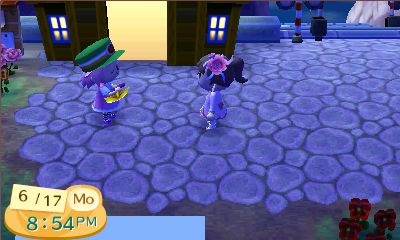 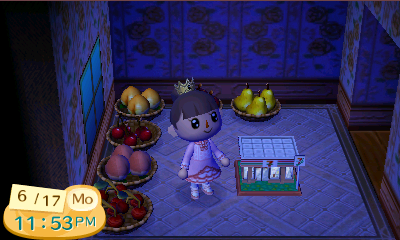 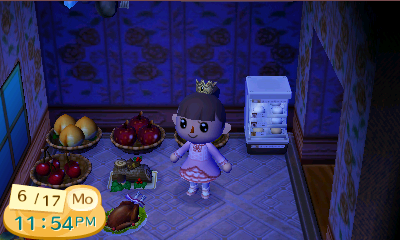 LOOK HOW CUTE I AM. 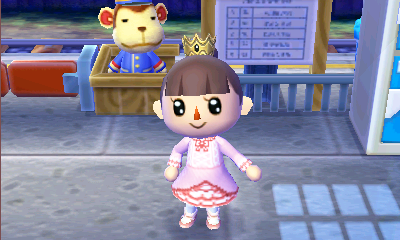 I also got two of the DLC items–the ones that actually can’t be reordered!

I still need to catalog the rest of the DLC–minus the Cherry Blossom Clock and Rainbow Screen. I’d probably like some to keep though… But I can order them myself once I get the catalog as long as I catalog them in the first place.

I stopped over at my boyfriend’s town to buy a fake Dynamic Painting and pick up some Perfect Peaches from him. I actually really like how it looks and wanted one for my house.

As for why I picked up perfect Peaches from him, I didn’t have any spare to sell, but I knew he had some and Rainy’s town is buying them from more. 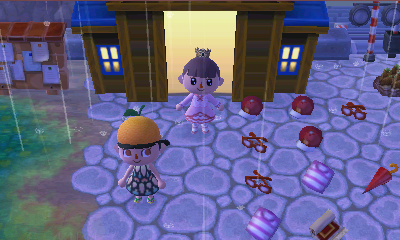 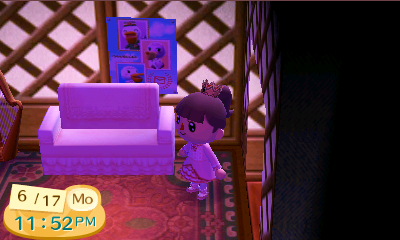 Skcoddam invited me over to sell the rest of my stuff. 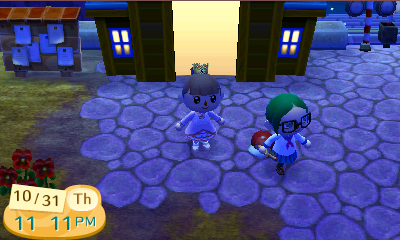 It was Halloween there. I took a piece of candy as a souvenir. The music scared me.

Also Streetpass 😀 I got a Pinwheel. 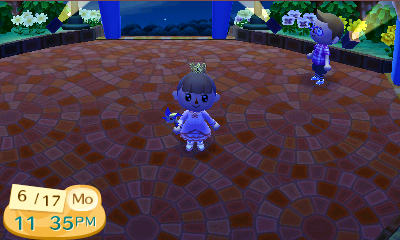 But yes, time to stop for the night.

…so, I honestly can’t decide. Which hair accessory do you think looks best?