Despite some rudeness, I planned to stream randomly for most of today–and as usual, take screenshots and write while I do so. I really hate not having logs for things so…

But yes, Village overview:
Marina: Spoke about her house and making sandwiches.
Molly: Wants to visit my house at 3:30PM
Merengue: Wanted to offer me a new nickname. She suggested J-puff–I told her Princess was the only nickname for me.
Flurry: Wanted to know how her outfit looked.
Peanut: Told me about the money rock.
Marcie: Asked me to get Merengue
Maple: Bought my Reversi Piece and sold me a Minimalist Sofa
Julian: Spoke about his Town Tune and gave me a Rococo Shelf.
Cookie: Gave me a Backyard Fence
Diana: Asked for a Moray Eel.

I managed to finish close to 3:30 so I hurried over to my house. 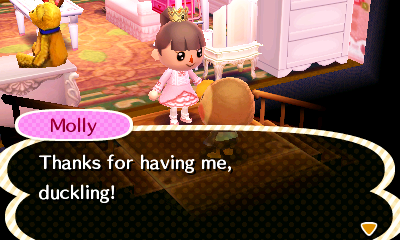 It was then over to Dream Suite for Dream Villages 😀 But I decided I’d update mine a bit early today. 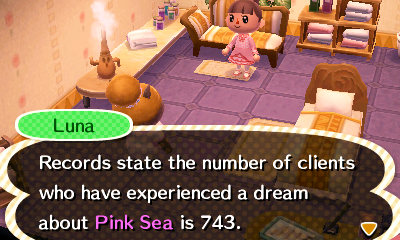 Thank you to everyone who has visited!

Since this will be very dream focused, I decided to go and grab the nightgown from the Able Sister’s for today. 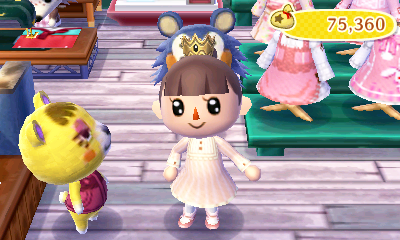 To start, I am doing the two horror ones I’ve missed from the first two Freaky Fridays! Since I still feel really bad 🙁 So yeah… 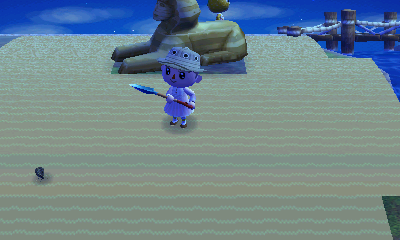 Ready for exploration! The entire town was made more or less with a Desert vibe–it looked really nice. I did find the various missing tiles for the main path (Replaced with sand–so it was intentional) interesting… 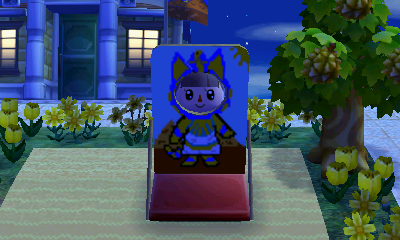 Unfortunately, it seems at least one explorer didn’t make it… 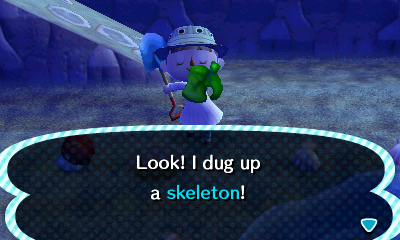 As it is, I found 3 Banana Trees all the way to the left… First and third with both bananas down and the second with just one… wonder if it meant anything. I then headed back to the main map… 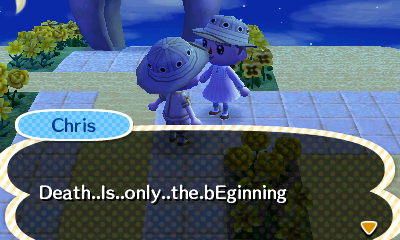 … 🙁 So glad I didn’t put on the full outfit now.
The house was really interesting–all the rooms were well-made and I couldn’t resist taking a nice picture in this lovely digsite: 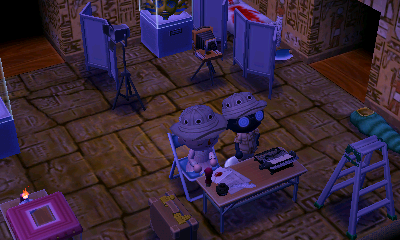 I noticed something near the back though and… 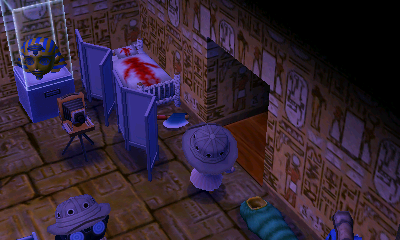 While most rooms looked like ancient treasure, the right room just made it all the worse.

Downstairs was filled with treasure, skulls, and a sarcophagus 🙁 As for upstairs… it was still being dug up. I wonder if that means it’ll be added to later or not–doesn’t make it less creepy though… 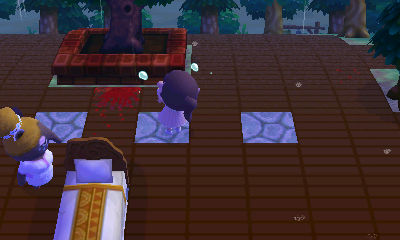 Immediately greeted with rain and blood. What a terrible sign T___T There were weeds and dig spots all over so I decided to get a shovel… and there was even more blood by the well. A Trash can was buried near the well… odd. And things were quickly getting creepier… 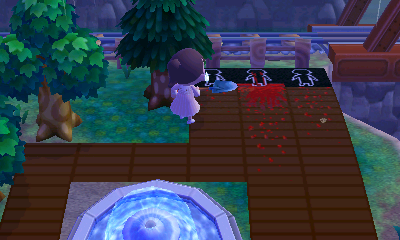 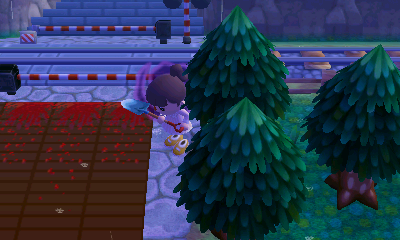 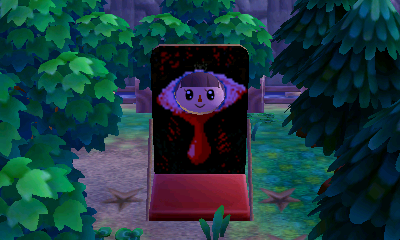 darn my obsession with faceboards. Why is there no sad face T__T I then continued along and found a bunch of holes…these weren’t ones I made. 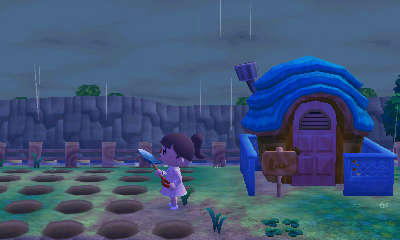 I was curious though and buried each one to see the end… which was a manhole with more blood 🙁 I should’ve expected as much. I then continued along finding more things around… a Pouch buried behind the campsite, an expired bingo card between two trees… and various pieces of furniture. I also found a baby’s hat… which is kind of horrifying T__T

I headed towards one of the houses–more blood outside it wasn’t a good sign… And more strange things buried like a Paper Scrap. Before going into it, I decided to look to the left…only to find many more holes and buried things and a creepy A. 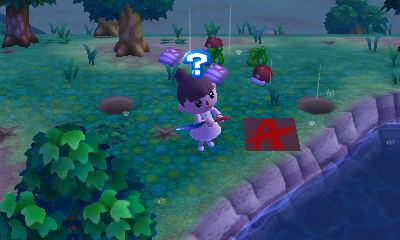 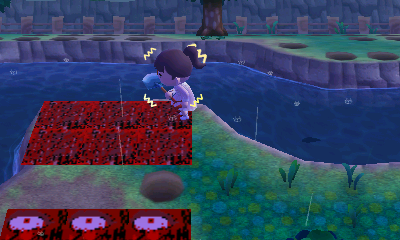 …odd pattern among all the other things… T__T
While many holes were gyroids, more clothing items were also found… so unsettling ._. Another A was further down, but since I’d be going down that way next, I headed back up to look at the house now… finding some pink-slip ons buried behind it 🙁
The house surprised me a bit… well, the first room. 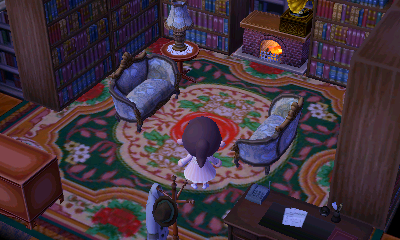 It’s so nice. The niceness did not last though. The left room was filled with peaches and a pear with creepy posters along the wall. 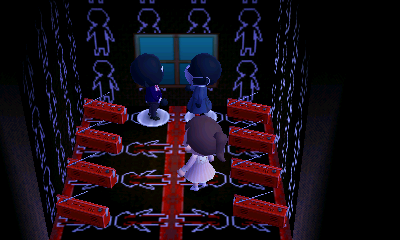 And it didn’t get better.

Something tells me the baby didn’t make it… 🙁 And the mother went insane… or the doctor. Or both. K.K. Moody played upstairs and Lullaby downstairs…

It was time to continue going down… in which I found presents and other things 🙁 They contained a female mask and a roman candle. I’m also really confused about digging up a classic sofa surrounded by blood 🙁 There were various pieces of furniture buried on the beach too along with a watering can and a bunch of perfect peaches… 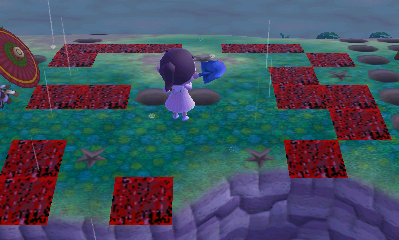 …E 3? Heading towards the final house… it was pretty scary. An axe outside, more blood, someone asking to get away… and the house itself was even worse. 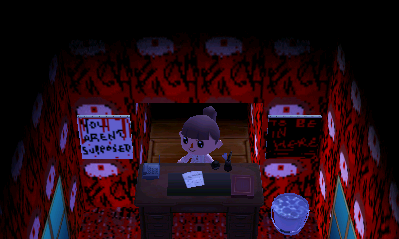 Anyway, taking a break for now–more Dream Suites lately hopefully–or if not, definitely one later tonight.