So, today is a bit disheartening to start. I expected to have my 3DS in hand and be streaming right now and celebrating and it’d be awesome. Unfortunately, I apparently missed the package delivery because despite the pick-up being very late, they ended up delivering it early–and I missed it by 10-20 minutes (and apparently nobody else in my household was available nor could anyone call me to try and get me up). I don’t even know how I am up. Maybe I just sensed the fact a package was coming and now I wish I didn’t even try going back to sleep (as for why I did, today is my sister’s birthday and napping in the middle of the day = not recommended). Regardless, it is 10:30AM now and I can’t skip Animal Crossing in the morning or wait to play until 4PM to pick up my 3DS, but that’d be stupid to do in a real time game.

Thus, I will be playing on my old 3DS again for most of this entry, but I’ll probably try and avoid pictures or things because taking them off the SD Card sucks. But I guess I’ll try and not cry and just be happy that I can play (even though this 3DS can’t charge more than halfway) and…and… T________T

So, I learned I can’t take pictures Isabelle talking at the beginning with L + R. Just not making my day any better, game :/

There’s a new live venue
opening up in town today!

You know, I’m a huge fan of the
artist K.K. Slider…

*LOVEEMOTE* Do you think he might come
to Pink Sea and perform?

Oh my gosh! If he does come,
you’ve just got to go see him!
He is sooo dreamy!

Jennifer, I hope you can make it
out to a concert sometime soon!

So yay for Club LOL being unlocked! Gonna get my first emotion today <3 Anyway, upon actually getting into game, I had a full mailbox. I received the items I ordered from the Happy Homes (must get the Watering Trough today) along with replies from my animals for the letters I sent. Katie also sent me mail with ANOTHER World Map... My Tree Stump still refuses to be a heart... it was a butterfly today (which I will be trying to get for the tree near the campsite) I then headed to pick up my White Rococo Dresser and give Cyrus the next one to do. I wish people would stop trying to buy them. ...And the tree stump by the Campsite became a Triforce. Why must the ones I actually want where I want them be rarer than the actual rare ones? T__T 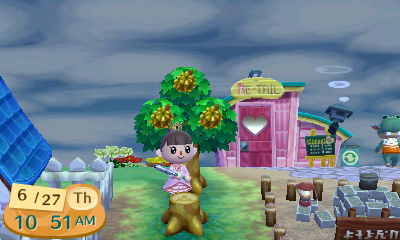 I also had Katie again… 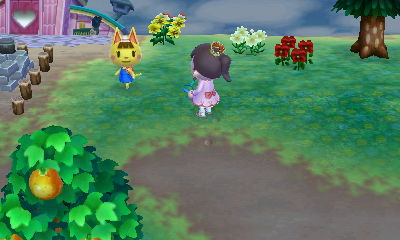 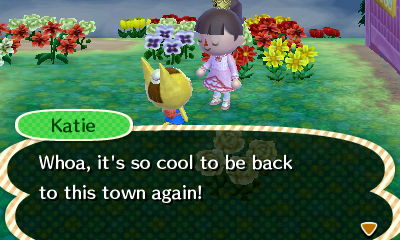 Blue had some fossils for me so I brought along Katie with me. 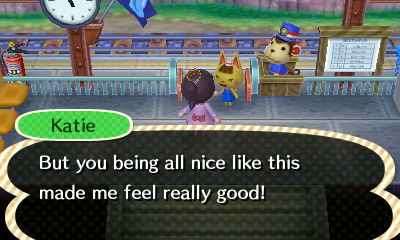 ^Why you should always be nice. 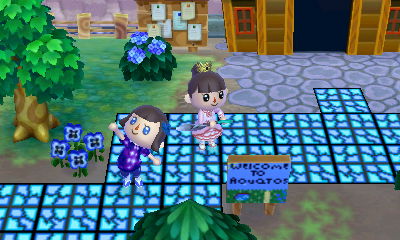 She also surprised me with Pink Lilies.

After continued frustration with trying to find my last fossil, I decided I’ll just try again later and proceeded to the museum for now. The museum had the Golden Frame which really excited me. I had to go order 2 more. Then it was time to pay off my home. I picked to expand the Toy Room next.

…And then I finally found my last fossil. I stopped by Re-Tail first to sell some things and also my house to drop some stuff off. Then it was back to the museum.

Once I had finished with those chores, I realized it was past noon and thus… EMOTION TIME 😀 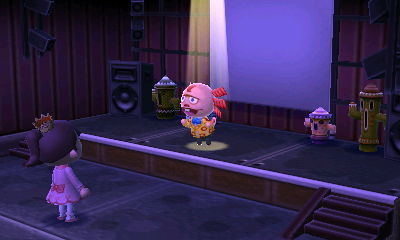 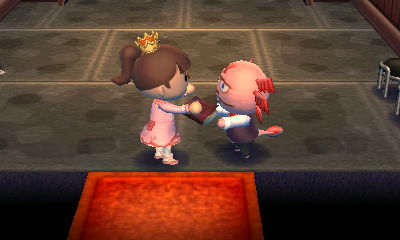 Rocco then invited me to his house. He offered to let me buy something, but there wasn’t really anything I wanted. I picked the Firefighter Shirt though. 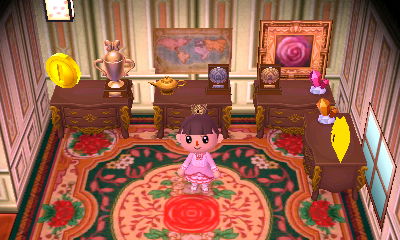 I then took a break in hopes that maybe my 3DS will be back and then I can stop taking pictures through the ingame camera. I still have to do stuff on other characters + patterns so hopefully I can get a lot done.

And as of 3:18PM IT IS BACK 😀 *CELEBRATORY STREAM TIME* Until I have to go to dinner anyway. 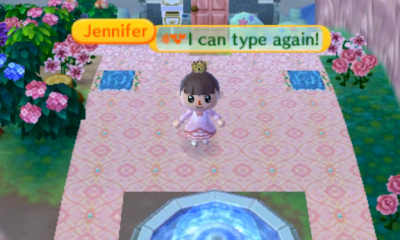 Blue invited me over to pick up a Regal Chair.

Then we disconnected @-@ Thankfully, it saved before–although, I didn’t get a chance to pick up the chair I went over for… We shall have to try again later. Kyle wanted a piece of furniture so I gave him a Black Bass. He gave me a Mini Circuit. 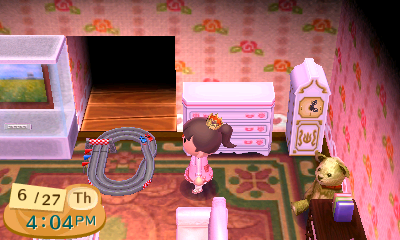 Eeee! I got Peach’s Parasol from the Fortune Cookie 😀 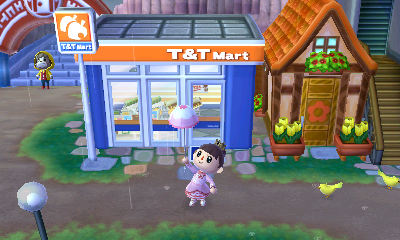 I then stopped by Club LOL to switch out the Gyroids. 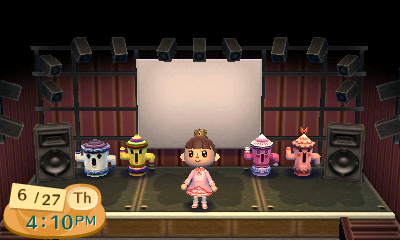 I then opened my gate for Selaphi to come over to sell her pears. Carina also stopped by to drop off a Pink Zap Suit for me. 😀 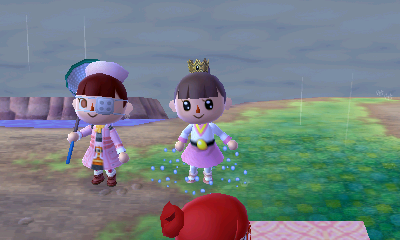 We took silly group shots together~

Then I decided to work on patterns before I had to head out for dinner <3 Upon switching back to my character, I had mail! It had my fancy frames so I dropped off one at Cyrus' to be customized. 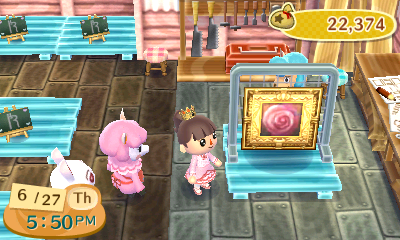 I’m making it Landscape :3 Then it was back off to the Able Sister’s and more back and forth switching. Then it was off to eat, but I made a quick stop at the HappyHome Showcase to order that Water Trough. Then it was off!

Upon return, it was time to continue with patterns plus in 5 minutes, it’ll be Club LOL’s Grand opening (for the music anyway)! I’m really excited~ But first, I had to visit Blue to try and grab the chair again and also stop by her island for the Tropical Flooring! Not to mention the HappyHome Showcase for the StreetPass hit I got 😀 I decided to do the latter first since it’s right in my town anyway. …However, there was nobody there. Which may be a good thing–because according to my notification I streetpassed myself! Weird. Regardless, it was now to Blue’s Town! After picking up the chair, it was off to the island 😀

After picking it up, we then headed back. And now, time for more patterns. I managed to finish pretty much everything with just a few I can make whenever left so I took a quick pause to pick up my fancy frame, drop off my Regal Chair, update my town (who are you 26 people?! Thank you for visiting though!), and check out DJ K.K. at Club LOL 🙂 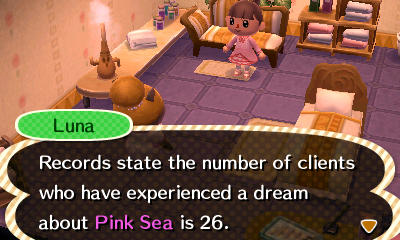 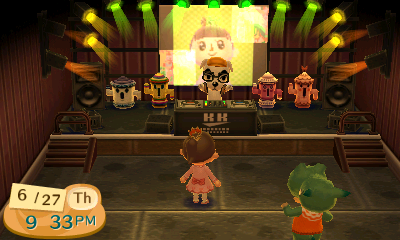 So fun <3 After that, it was mostly working on pattern placement until I went to bed... Which is REALLY hard. I think I'd have an easier time if I had everything placed already, but they'd have to start requesting things first... Ugh, kind of feel like I'm in an endless loop of suck now when it comes to getting my town all set up :/ Maybe I'll try doing a small outline on my map to try and get an idea... I can hope that'd help anyway. But for now, I called it a night. At least the patterns are done for the most part (and the only ones not done were maybe's anyway so all the important/necessities are done). 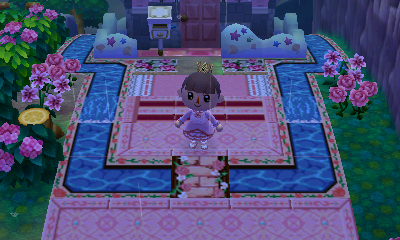 I suppose it’s progress at least?

Hopefully I can do lots of Dream Villages tomorrow and maybe actually get some requests!
…And then I had a StreetPass so I checked that real quick >> 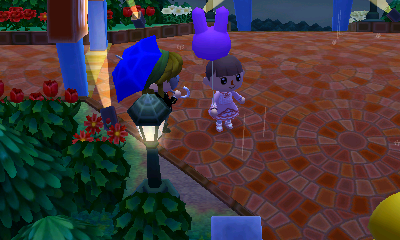