Today has one important goal… to start getting public works from Phoebe. I honestly don’t care which I get first (Although, I am hoping for the Picnic Basket), but as LONG as it’s the Geyser or Picnic stuff, I will be happy. I REALLY hope she suggests them quickly and considering I received a mail from her today, I’m hoping this means she is well… if not, I’ll be paranoid and cutting things close come the 4th X__x If she still isn’t well on the 3rd, I will probably have to ask Miranda to stay…

Besides the letter from Phoebe, I received mail from Katie. She gave me her photo for the first time–I still need her camera though! I’m probably one of the few AC fans who do not care much for photos. I honestly would only try for them if they were in the catalog. I did try to make a nice room for them in City Folk, but due to room limits, they ended up just being on the floor… And when it comes down to it, I don’t really have anywhere to place them. Like I’m sitting here thinking where I could even -put- them and I have no idea. Katie’s picture is actually my very first picture and while I know many people like to get the pictures before they leave, I’ve never felt the need to.

Maybe if item limits were back to unlimited, I could find more reason too–or if you could hang them on walls. But I guess I never really understood the whole “give a photo” thing. Maybe it’s because I avoid cameras like the plague. It’s still a nice incentive though and I definitely will try to get the photo of each of my Dream Villagers, but I will be very surprised if I get any from anyone else.

Moving on, I also had some exciting news on the bulletin board… 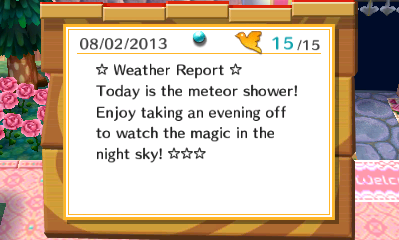 I”m soooo excited! 😀 This will be the first meteor shower in my town. Eeee <3 If that wasn't surprise enough, as I went fossil hunting... 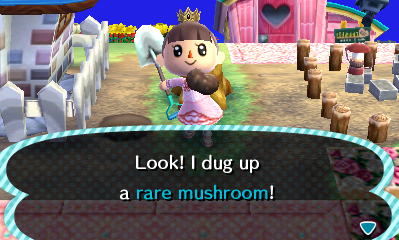 Eeee! I honestly never expected to see one, let alone so soon, so this completely threw me off. When I first saw her digging it up, I honestly thought it was some weird dirt mound even though I knew these were around and you got them by digging but just… so exciting! (AND PEOPLE SAY SPOILERS RUIN THINGS >_>) I officially have one of each mushroom 😀

Since Phoebe wakes up so late, I decided to try and plan accordingly to get things done ASAP so I can fully dedicate my time to public workness. While it took longer than I wanted to, I did manage to get everything done by 11:30AM, so it was now time. 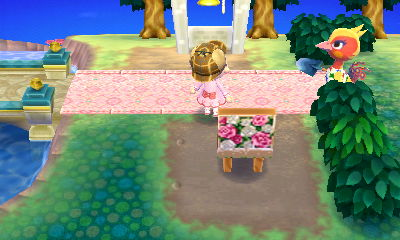 And she was out! 😀 YAY! She gave me an exquisite rug as thanks and thus, it was officially time to begin… 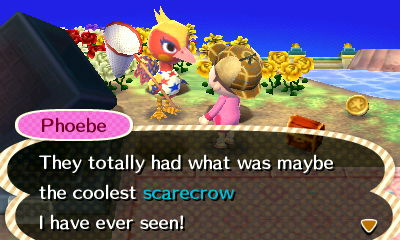 At this point, I paused to get a new emote from Dr. Shrunk. 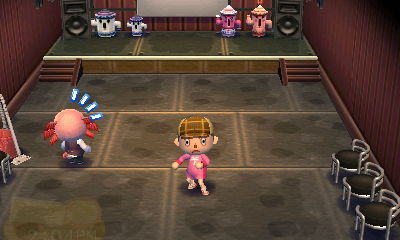 On my way back, I noticed super fluffy clouds: 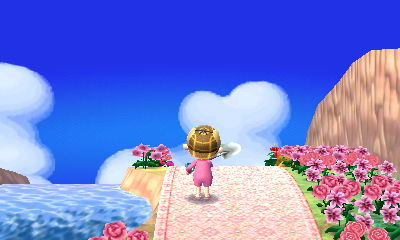 At 3:03PM, I FINALLY managed to get a request I wanted! 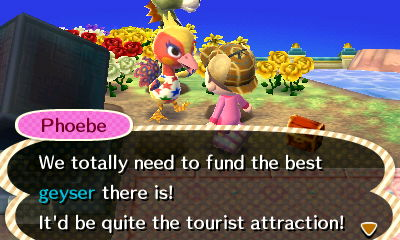 Yay for the Geyser 😀 I immediately went to place it and pay it off. 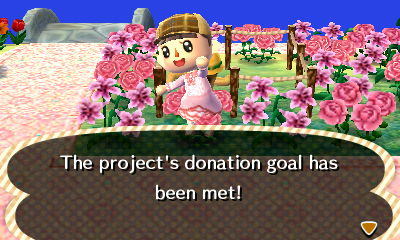 So tomorrow, I shall do my best to get the Picnic Request…

Now that it was night, the Meteor Shower started!

So pretty T~T <3 It was a pretty night in general too: 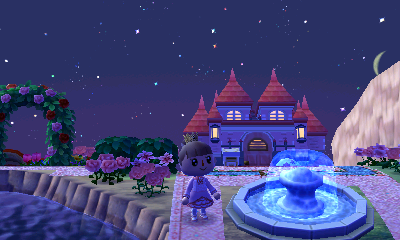 And that was pretty much it for today :3 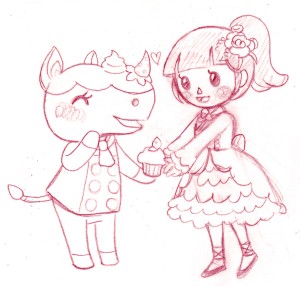