I hate when I sleep late T___T Regardless, I still have time to do morning things, although, this made me wonder. I know the day itself more or less starts at 6AM, but I wonder if that effects bugs too or if once it hits midnight on July 1st, they’ve switched… Moving on, about loading up the game I was greeted to mail and rain. I received a Vibraphone from Rocco, ANOTHER World Map from Katie, and the stuff I ordered. Need to give the White Stockings to Selaphi and Hinaningyou to Carina.

Kiki than randomly gave me a Peachy Tee. 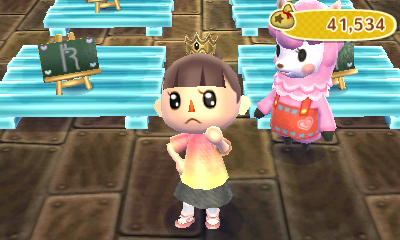 The Nooklings will be having another sale today… but I’m honestly not going to wait until 7PM to buy out their store.

Anyway, I headed to Re-Tail to finally pick up my Regal Chair (although, I don’t have anywhere for it to be placed this second…) and also find out the turnip prices this morning for the heck of it. 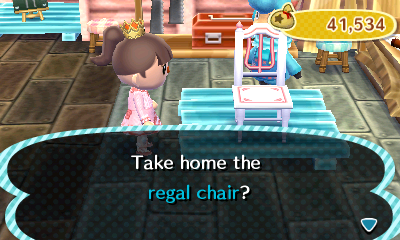 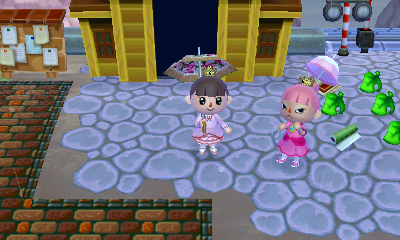 And Regal stuff too 😀 yeeees. Lots of ordering when I get back to my town. 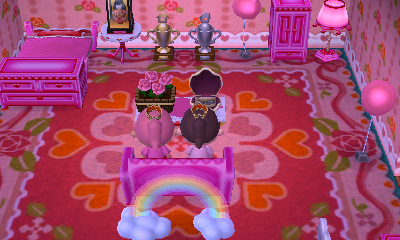 We also took a house tour.

Then I paid off my loan to Nook and picked my Kitchen to expand next so maybe I can actually start making it look like one.

Eeee! Shampoodles is being built. Should be about 3 days. 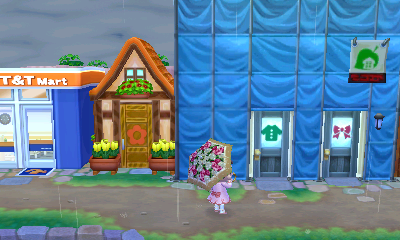 I won’t be using her (well, I may do the Mii Mask thing for the heck of it), but my other characters all need a hair change. On the brightside, I don’t have to buy EVERYTHING from the Able Sister’s now… but I kind of have to get up my full item list first so I can keep track of what I have in the first place.

I then met up with Dr. Shrunk to get my next emotion :3 It was the Sadness Joke. 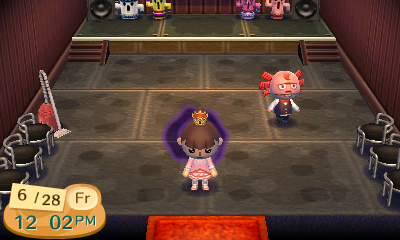 Tammy asked for a piece of fruit. I gave her a Peach and she gave me a Crossing Shirt. Then it was time to update my dream, check out StreetPass (unfortunately, just another Tweeter), and finish cleaning out the shops.

I then popped over to Vella’s town as I have felt bad I couldn’t talk to the last two times she opened. It’ll be nice to actually say Thank you! 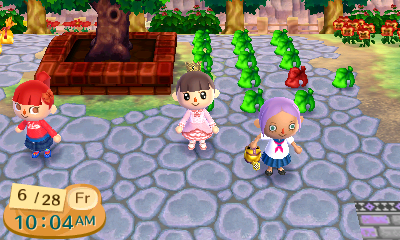 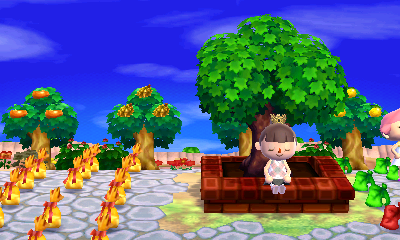 It was fun visiting :3 I got to catalog some things and got a Pink Argyle Tee Tank from the goodie bag I picked <3 And she also gave me a Pink Hydrangea Start 😀 My pink bush project continues! Now if I could just unlock Public Works... Have all these plans and can't do anything due to needing to get a request or someone needs to move out :/ Kind of frustrating... Edit: Bonus picture she took 🙂 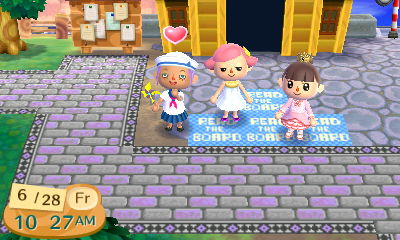 I also managed to get a Marshmallow Chair which I then went to order another of so Cyrus can make it pink! Until then, I gave him a Ranch Wall Rack for now. 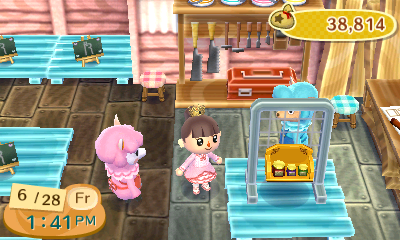 I then stopped by Carina’s town to drop off the Hinaningyou. 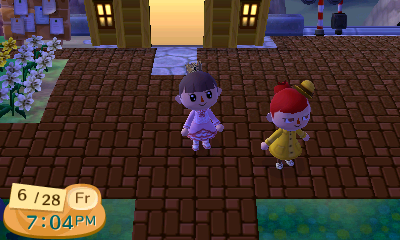 Then it was time to check the island’s items today. As usual, I did Club Tortimer first. The items were terrible, yet again… I decided to try one more time to see if maybe I got a different island.

The second try managed to get different items and I was with someone.

They wanted to do a tour, which I agreed to, but unfortunately I didn’t have my protective hat with me… so hopefully I don’t get too tan… 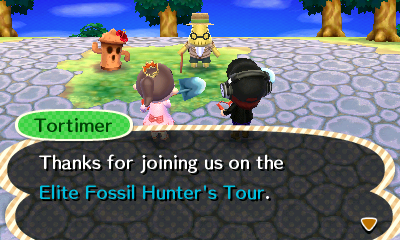 We got close, but failed (Time hit 0 right after I got inside the house). We ended up trying again–but not before I purchased a Captain’s Hat to make sure I didn’t tan. 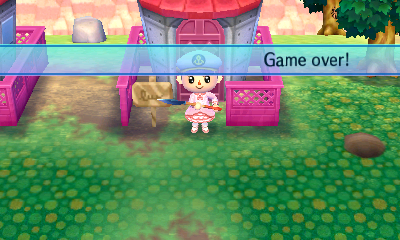 We were successful the second time though and even managed to get gold for 13 medals. …that reward isn’t really worth it XD We then parted ways so goodbye Mayor Bailey from The Vale! It was fun :3

Anyway, it was then off to park myself on my island (where the items were terrible, yet again)…or well, I was going to, but the minigames weren’t anything new or ones I found fun so I just headed back to town. 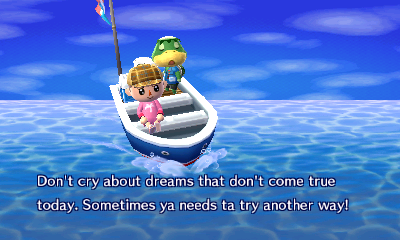 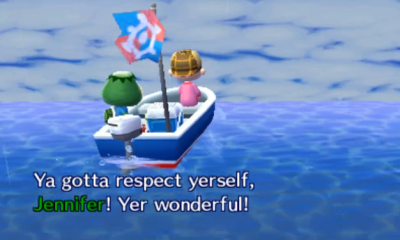 Even Kapp’n is trying to give me self esteem lessons. 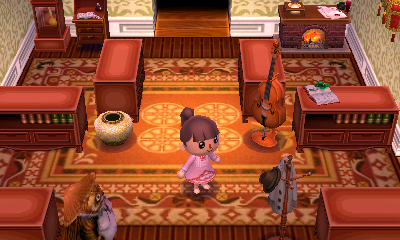 Dream Address: 2800-1439-3680 – Lion Village. I had gone here a few days ago, but it hit me that I never actually got to check out all of the houses (since I had to rush out suddenly) so I decided to take a return trip to just do another look around.

I then paused since I wasn’t feeling too well. I headed to Re-Tail to pick up my Ranch Wall Rack. Then I gave him a Alpine Low Table to refurbish.

Then I dropped off some stuff at my boyfriend’s village. I also helped him find his last fossil.

Since it was past 5, I knew I probably had mail. 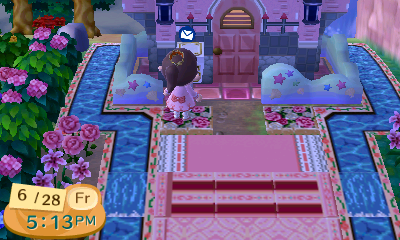 I was right. It’s too bad it’ll probably be another day before I have everything I ordered.

Ruby invited me to her house… she still hasn’t caught on that I want her to suggest a Fairytale Bridge. I bought her Rocket. 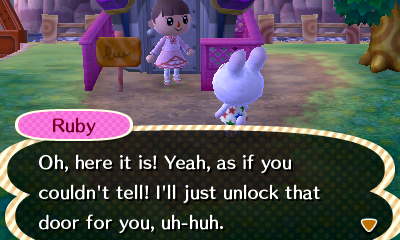 I then picked up my table and dropped off one of the Lovely Pieces to make Pink and White. Most of it will be used in the Kitchen.

Also remembered my backroom DID get bigger so… current WIP of it: 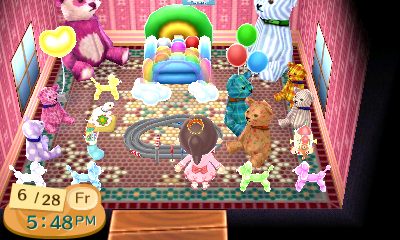 I then headed to Selaphi’s town to drop off some White Stockings for her.

After that, it was on to Blue’s to drop off a refrigerator and pick up a pink lily 😀

Upon getting back to town, I planted some bushes and picked up my Lovely Dresser. I gave him a Lovely Table next.

I then went diving for a little bit and well…

I got a Jolly Roger.

It was then off to Re-Tail to pick up my table. I gave him a Lovely Chair to customize in Ruby next.

I then stopped over at Stephen’s town for a little bit.

After hanging out there for a bit, I headed back to my town to pick up my chair and gave Cyrus the other chair to make Pink and White. 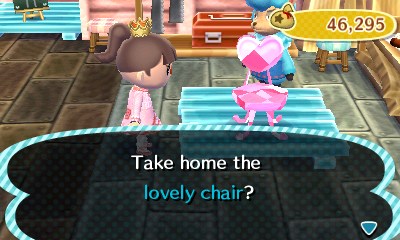 Ruby also had me drop off something to Kyle. I received a Black Track Jacket as thanks. 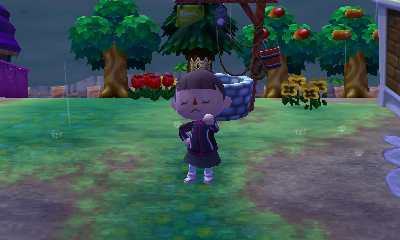 Picking up my Lovely Chair…

Gave him the Lovely Armoire next.

As I wandered around aimlessly hoping for requests, I saw Gulliver! 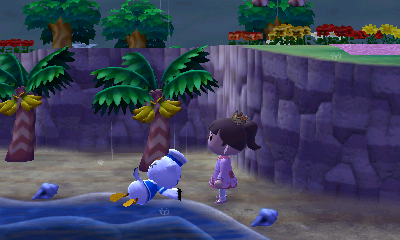 After talking to him over 50 times, I just went and grabbed the Megaphone Zed gave me. …after 5 tries and still nothing, I realized something was wrong. >_> 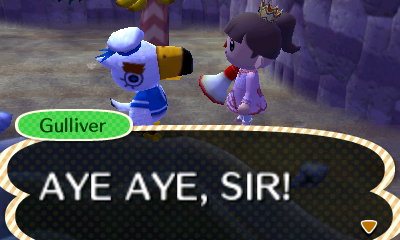 So…I may have…ACCIDENTALLY left my gate over because my boyfriend was supposed to come visit. >> 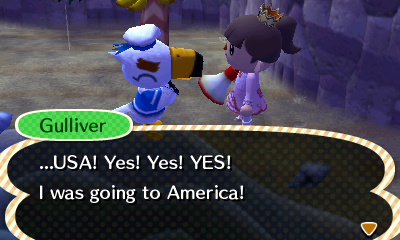 Anyway, he had to go to the USA so…yeah… I guess I’ll be getting the Statue of Liberty tomorrow.

Went and picked up my Lovely Armoire… 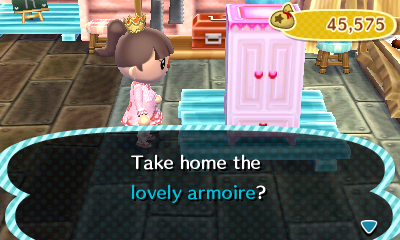 Gave my other Lovely Table next. After picking it up, I gave the last piece I needed customized–the Lovely Lamp in Ruby + a Custom design. 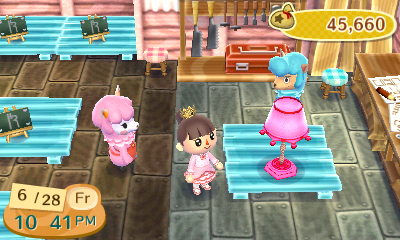 Sadly, I won’t be able to pick it up until tomorrow since it’ll finish after they close. …why do my villagers refuse to request things ._.

But yes, I then dropped off some stuff for my boyfriend and then we went dancing at his Club:

To end the night, I then went to Ruu’s town and we had lots of fun and I even got to make friends with some of her friends 😀 Thank you again for the gifts! <3 <3 <3 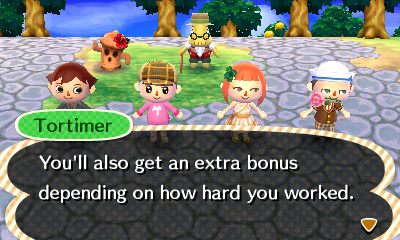 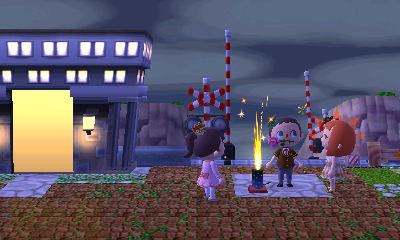