Yay for mail~ One a surprise and one not so much. 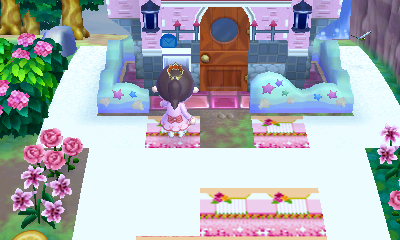 Tammy had sent me a Ranch Tea Table as thanks for her birthday present and the other was the Star Globe that Mark made me order for him.

I went to throw some stuff into my Basement for now to at least get it towards it’s stepping stones. I’ll probably be upgrading it again as I really want to work towards how it’s supposed to look. 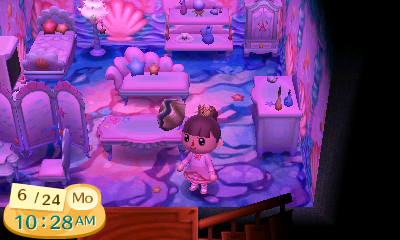 Flip had me deliver something to Astrid who had me guess on whether I’d receive anything–I failed (although, I did figure it was clothing–I just was really hoping for furniture). Blah. On the bright side, I found all 4 of my fossils relatively easily.

Anyway, then it was time to celebrate 😀

After the Ceremony, Kyle asked for any Fruit and Ruby asked for an Orchid Mantis… not sure if I will complete the latter, but Kyle gave me an Imperial Shirt as thanks.

I went and paid off my loan to Nook, but I’m going to hold off on seeing him for the next expansion in hopes I can find someone with a Pink Arched Door. I’ll do the expansion a little late.

After finishing at the museum (no new fossils 🙁 But bought some stuff at the Museum shop!), I headed to the HH Showcase. However…there was someone I didn’t recognize before.

I also received a Bubble Wand from Mark 😀 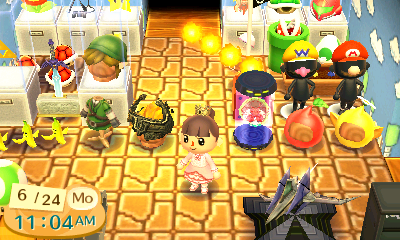 Reggie’s House isn’t very surprising (and not just because he showed it off in his room tour), but it was really cool to see. I also got to order some stuff I needed like the Glass Display Case. While I can use more, I only ordered one since I can order more from the catalog and I know the prices in the Happy Home area are a bit more expensive.

I actually did hit all 5 items I wanted to order… I will have to order more tomorrow. I really hate that paintings are apparently not reorderable in this game though. :/ But yeah, there’s still a lot of items I am interested in.

Anyway, after playing around in the StreetPass area and buying out all the shops, I then headed to order the Rococo Lamp that Selaphi let me Catalog last night. Then it was time for my last Dream update for a while–I won’t be updating while I borrow my boyfriend’s 3DS since I don’t want my Dream Address to change.

With that, it was time to check the island to see what items and Minigames it had today. It was raining again in town today and while I enjoy the way it effects the music, I’m kind of sick of rain.

Went to check Club Tortimer… Someone named Luis was at Club Tortimer but I couldn’t say Hi to them 🙁 I ran out before they came in to see me. To my island now… There wasn’t really anything good, but I bought the Life Preserver for the heck of it. 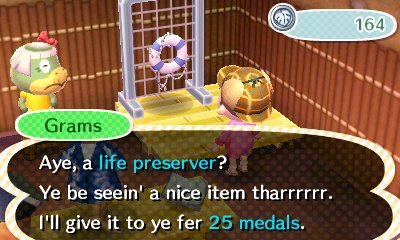 I also went and caught a Sunfish to pay off my trips to the island along with catching an Orchid Mantis for Ruby which I can’t do in my town now. I decided I should really work on Catalogging things from the Island so I went ahead and bought the other two items there–a Blue Aloha Shirt and a Pirate Hat. The Scavenger Tour was back today along with one or two tour[s] I had yet to do, so it was time to do some tours for fun :3 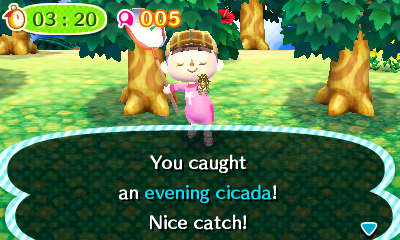 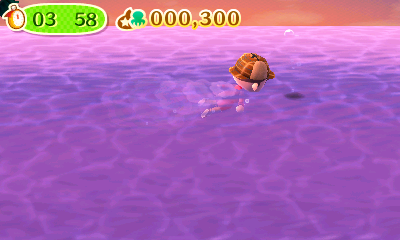 I was going to do more Elite Scavenger Tours, but I had to head back to meet someone because… well… 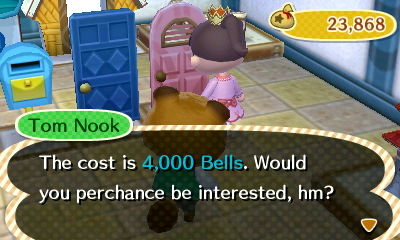 yeeeeeeeees. Thank you nickfurysothereye! In the meantime, I will just be sad that I can’t also expand a room size, but my exterior is DONE! Thank god. :/

Also, Ruby gave me an Astro Floor as thanks for the Orchid Mantis.

With that done, I decided I should work on clearing out my Wardrobe and figuring out what will be going where and what I may not even need.

Of course, the organization was then paused as Mark invited me over to help him out with Redd. I also had to drop off some stuff for him. He gave me a Super Star :3 <3 I then headed back to my town and Ruby asked to see my house. 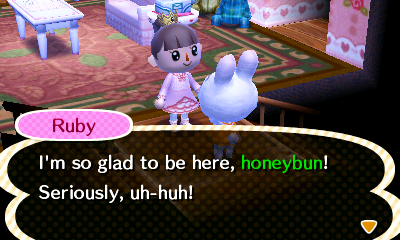 After that, I worked a bit more on organizing but then realized it was stupid to do that before I got my catalog all set up. I at least organized the items my other characters already had though.

Then, it was back to continuing request hunt and failing. Astrid randomly gave me a CD Shelf though O-o Which my boyfriend then took. Regardless, I did my best to try and help him get a Violin Beetle, but no luck 🙁 Trying to help with the Char now and also bought myself a Bunny Hood from his shop. 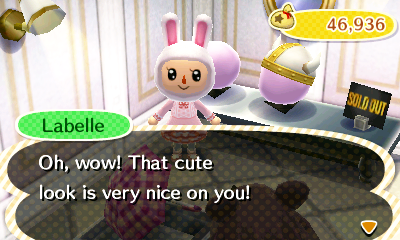 Back at my town, I ended up running into Pete who let me know some mail had arrived. Probably the Rococo Lamp at the least 😀 Ruby also gave me a flower chair for finding her some furniture.

After picking up my Rococo Lamp, I quickly headed to Re-Tail for Cyrus to refurbish it. 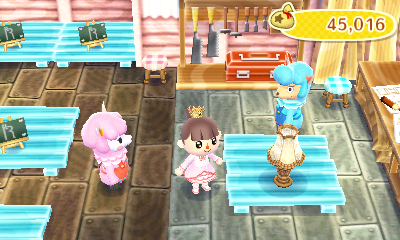 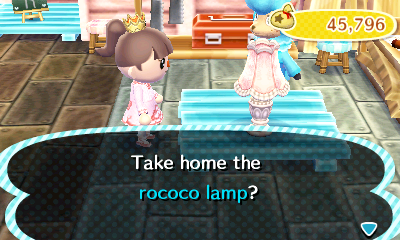 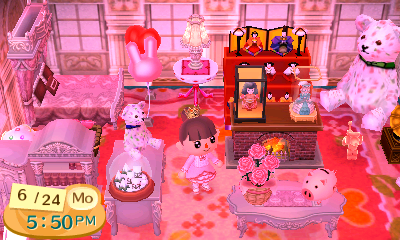 Now I just need to get a Princess Cage, Marshmallow Chairs, and a Pink Heart Balloon (or maybe White Heart Balloon or both). And maybe one of those Kokeishi Dolls… Then the Bedroom will be 100% complete!

After much frustration and failure at trying to get requests, I decided to go and do some Dream Villages until it’s time to pack my 3DS up to be fixed. (Dream Village Video Log) 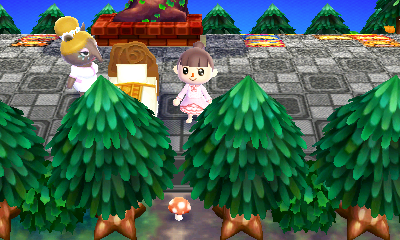 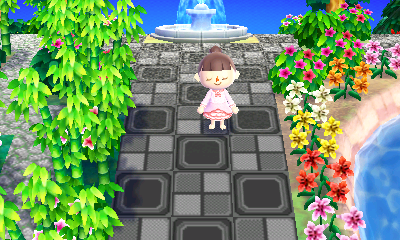 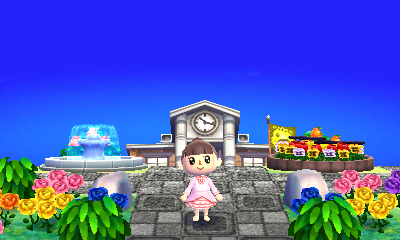 On the bright side, I got a Pink Pinwheel from StreetPass. 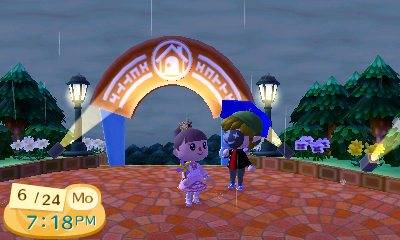 Blue had some stuff to give me, but sadly, it seems all the servers are down–not just the Dream Suite… So I shall be visiting later.

In the meantime, I had some fun with QRs (well, sort of) until Able Sister’s closed… 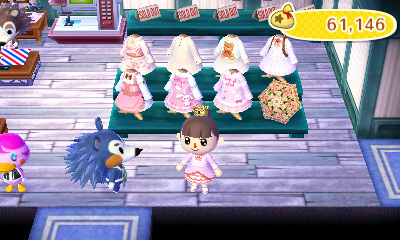 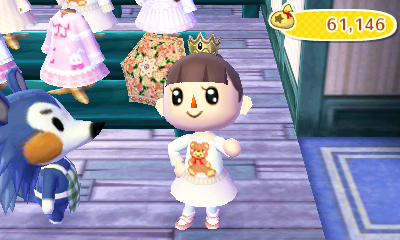 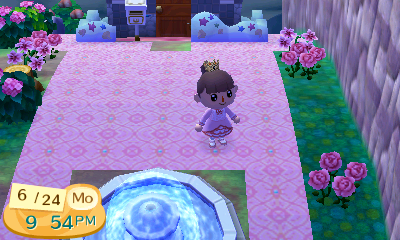 Even the beginning of the path is coming together now 😀

I expect to work a lot on patterns tomorrow (in a…odd way). That is just the center part of the path done right now. The Teddy Bear dress is actually not done–the skirt needs to be modified a bit, but it’s close enough. Teddy Bear Backpack Dress also needs some slight color modification, but overall it’s fine.

Blue then came over as did Selaphi 😀 And then Matt joined in as well! We catalogged lots of stuff and I got cool things for my house and some bushes and it was awesome <3

I only need a Holly Bush and Sweet Olive Bush to have one of each Bush–and then I still need TONS of Pink Hydrangea. I will still need a few more of other bushes, but at least I’m getting somewhere!

I also got a 4-Leaf Clover from Blue 😀 Which helped finish up my character’s bedroom. Just a few items left! (Mentioned earlier in this entry) And thus, Random fact of the entry: If you couldn’t guess from the bookmark down the middle of this layout, the 4-Leaf Clover greatly inspired the layout for this blog 🙂 Which is why I’m so happy to get one!

And Selaphi also left a lovely message on the Bulletin Board :3 And gave me a Outdoor Bath!

Matt also left a silly message 😛 IT ONLY NEEDS MORE WHEN YOU BRING PRETTY THINGS, MISTER. XD Selaphi then invited me over to do more catalogging at her village <3 it was fun. But yes, that was it for today!