Today was the first semi-intentional late start. I’d been skipping sleep a lot so it was nice to actually get some, even if I missed some things. I received the items my mom had me order for her along with presents from some of my villagers. Nothing I cared for, but 2 were items I didn’t have on my catalog so that was nice.

I have a new neighbor moving in–Jeremiah! I don’t care much for him, but he ended up moving RIGHT where Flip was which was really nice. 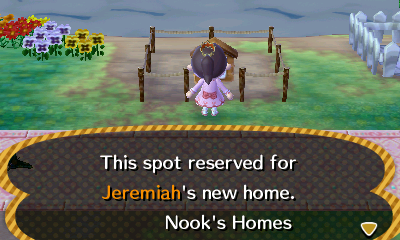 He’s lazy like Joey so he can also request the Water Pump and Jungle Gym.

Went to the Cafe… Kapp’n was there today. 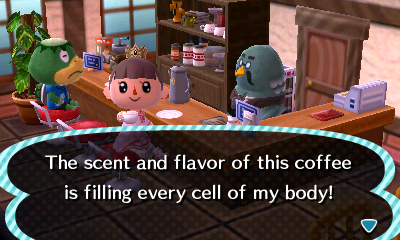 Picking up my refurbished Aroma Pot~ 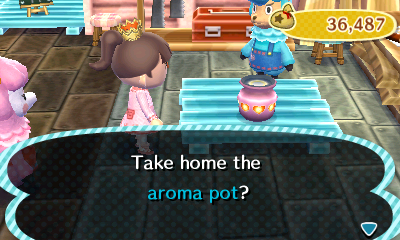 Katrina is here! After this go, next time I should unlock her. 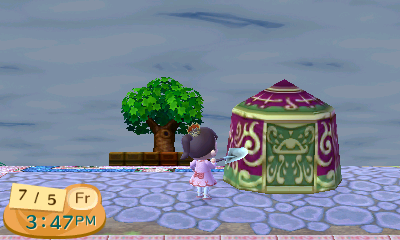 I decided I’d do her last so I just put bells on the floor for now.

Since it was already after noon, I headed to see Dr. Shrunk. 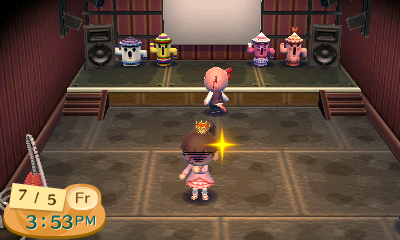 Mischief Joke! While I’m happy for new emotions, I’m really wanting the flowery one he uses at the start or the dance-y star ones (I know his main dance one is last). Or the crying emotion as I feel that fits me more than sad.

It was then off to see Lyle to cancel the theme. I did hit 500K though with it, so I grabbed my prizes first even though I don’t care about the Gold exterior. 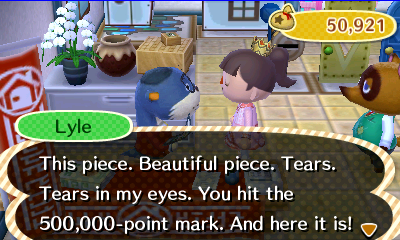 I’ve unlocked the first two. But yes, I went and canceled and now no more theme challenges for me… I will hopefully be able to get more information on how many points I need to hit 150K tomorrow. 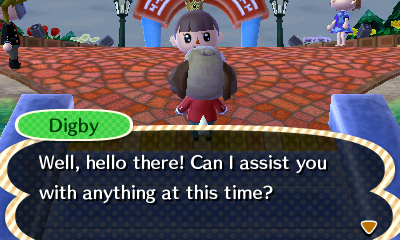 Nothing new again, sadly. …I really should figure out what I still need though. Once I get my wishlist all set I suppose. At 4PM, it also started raining… I’m never going to get more pink lilies and pink carnations at this rate :/ (I’m okay on roses right now though) My fossils also ended up being already in the museum AGAIN so I still need the same 4 ._.

Tammy wants to move. I was pretty split on this. I still need her to request certain things, but then I can finally place the Metal Bench down. There was also the thought if I said no, maybe Astrid would ask to move, but I still don’t have the bridge yet and if someone else moved there, I’d cry. 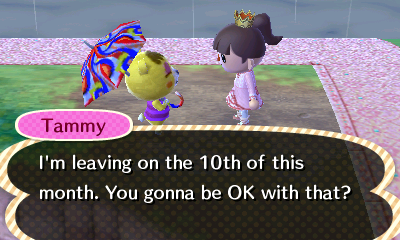 Anyway, after debating, I told her she could move. I just hope she either suggests a Public Work I want before she goes (She suggests the geyser, Picnic Blanket, and Windmill for the record–all ones I REALLY want) or it won’t be long before we see another with her personality type moving in. If I change my mind, I can always try to get her to stay… anyone have any opinions on this? I really am mixed on what to do.

Kiki had asked me to get her a Cicada (any kind) so I caught her a Brown one. She gave me an Elephant Shirt as thanks which I was really happy with as I love the long-sleeved versions of the animal shirts.

After that, it was really nothing new… Update Dream Suite, buy out shops, send letters using stationery from Nookling’s, check the island, and that’s it. Can’t build any of the requests I have (and only 2 of them I even want to)

Misc. Events of the Day:
-Rocco had me play Hide and Seek. I had to find him, Ruby, and Tammy. I found Rocco about 10 seconds in behind a tree not far from the Town Tree. Tammy was behind the Stone Tablet, and Ruby was behind a Peach Tree near Joey’s house so it only took a few minutes. I received a Classic Chair for winning. 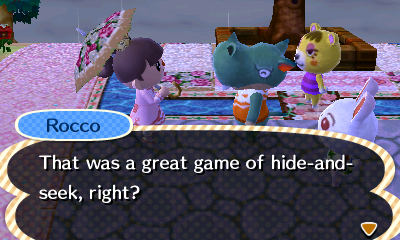 -A friend invited me over with a surprise of late fireworks. I wasn’t feeling well yesterday so I didn’t end up seeing any last night sadly and Animal Crossing no longer has them in July so. 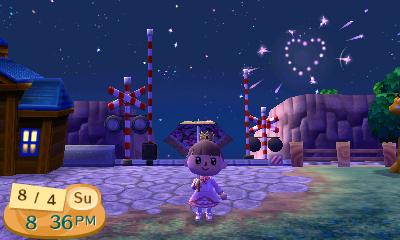 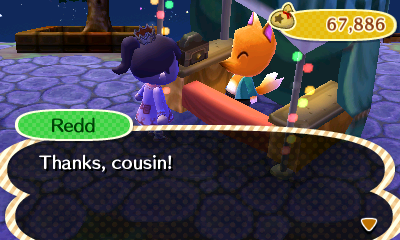 Buying some of Redd’s Cookies… Prizes in order:
1. Dud – Sparkler 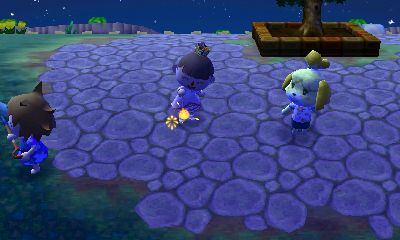 After heading back, I gave Cyrus one of the Boxed Fingurines to refurbish. 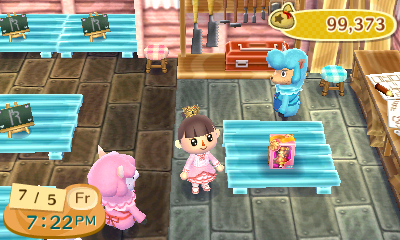 -I also did a bit more storage switching as I really need to clear out my storage.

-Rainy let me come over as she had one of the fossils I needed. 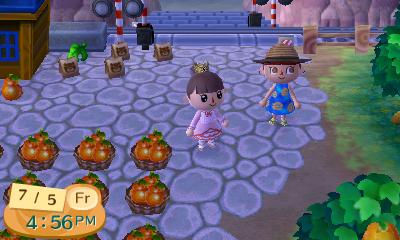 -Catalog is officially done on the site and should be 100% correct. I’d like to do a double-check on furniture, but I’d need someone to help me with that… Anyway, I am willing to order anything on there that is reorderable. If it’s not, there is a 99% chance that if I actually had it (and wasn’t just let to catalog it) I sold it regardless since I hate having stuff I don’t want onhand. I’m also not really comfortable removing things from my player’s house to catalog (I’d rather just order you something to catalog) so please don’t ask to catalog stuff in any of my character’s houses.

Hopefully the wishlist will be easy enough to get up :/

-Anyway, with the catalog done, it was off to the island. 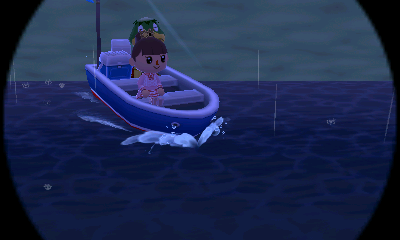 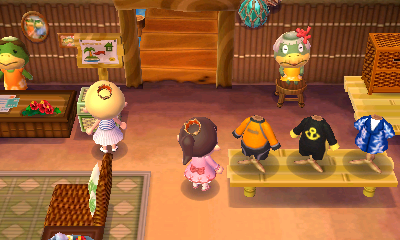 I was tempted to get it to catalog, but Wet Suits don’t appear in there so… Second trip had nothing good at all… 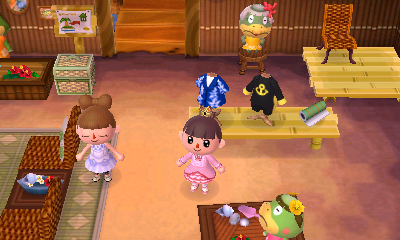 I was tempted to buy the chair for catalogging, but I want to save incase the treasure chest shows up. @-@ It was then off to my normal island. 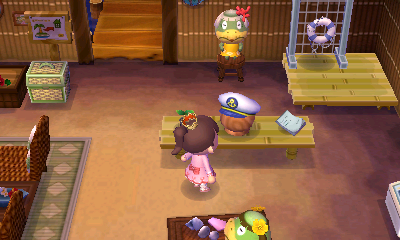 Terrible item streak continued! I would’ve done minigames, but Rainy invited Carina and I to go to her island to play.

She had a Mermaid table so I bought that to replace the awkward Regal one currently in the basement. We ended up going through the full game list which was a lot of fun. 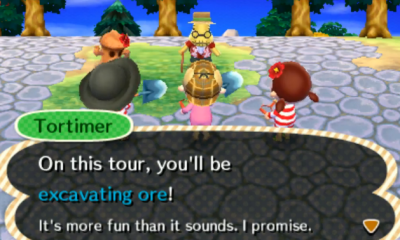 It was then back to my village…unfortunately, I’ll have to get my Boxed Figurine tomorrow now 🙁 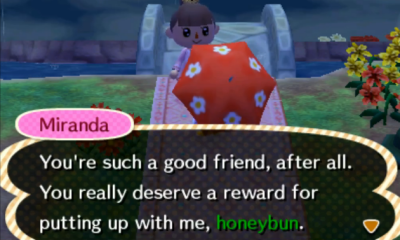 If you REALLY want to reward me, suggesting a Statue Fountain would be awesome. Hint. hint hint. …please? T__T (at least it was something I didn’t have catalogged yet)

-Also, Selaphi came over to pick up her hairpin :3 I also gave her a hibiscus <3 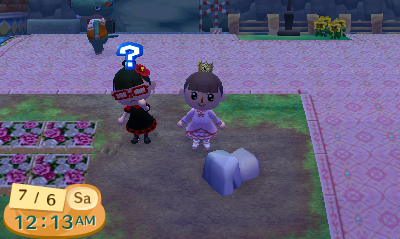 And Junri came to visit too! And will be ordering me a bread box T~T <3 Yay! (She also gave me a bird bath and plum bonsai :D) 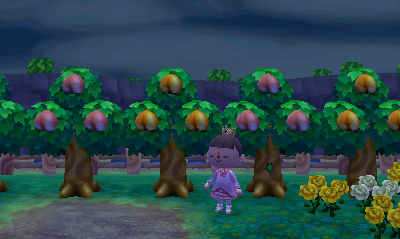 Edit: Since it is after midnight… Day 6. As to why I’m not putting it on the next entry–6AM is technically the start of a New Day. Plus, since this is “You at Club LOL with DJ Slider”, kind of had to do it a bit after midnight since it’s Saturday now! 😛 So he won’t be DJing tonight. 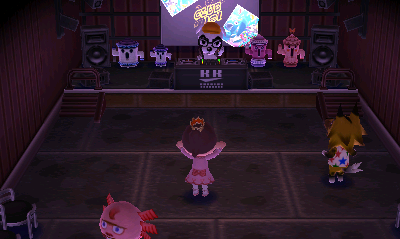