Today is another late start sadly. Regardless, it was another day of mail and rain. Besides the rest of the stuff I ordered from Timmy and Tommy, I also received a Modern Chair from Ruby and, as expected, the Statue of Liberty from Gulliver. 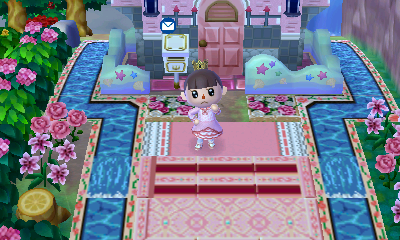 I decided I may try reverse psychology with Astrid due to a lot of my other villagers asking to move who I am better friends with… shall see if it works out. Although, while I like Kyle, he’s probably the one I want to leave the most right now as I should be able to get the cafe request any day now… :/

Unfortunately, I did get two frustrating surprises…

Two of my bushes died. I’m really not sure why or how but bleh. One was a Pink Hydrangea and the other was my only Sweet Olive :/ So pretty upset about it. I wish I at least knew WHY. I don’t know if it was just a crazy incident or if I should try planting them again or what? ._.

Anyway, Blue invited me over to grab a new Sweet Olive Bush and on the way, I also ran into Katie. 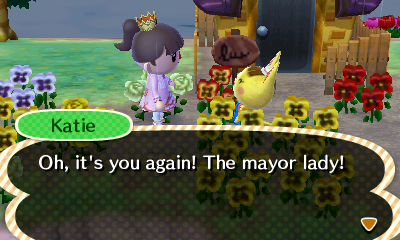 So I took her with me. I wonder if she’ll send me anything different…

Flip is leaving on the 4th. I told him he can go–hopefully whoever moves in after will place their house near his old one. Unfortunately, this means it’ll be a bit for the people I need to move (Astrid (Fairytale Bridge, Faceboards, Statue, Garden, MY ESTATE), Kyle (Cafe), Tammy (Park)) to leave…

Turns out I also have Saharah today. 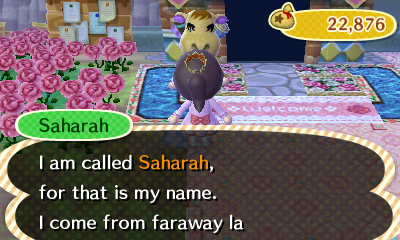 I don’t know if I will bring her again on all my characters–just not feeling up to it. Also really need to save money. I received Backgammon Wall and Common Floor.

…speaking of the Cafe…

I don’t think I have words for how upset I am about this. This day is just getting more sad 🙁

I then went and paid off my loan to Nook and expanded my kitchen again–I just have so many items for it, it’ll help when it’s at maximum size. Just two more expansions to go (one back and one left) and my house is as big as it can get. If only Public Works were this close to completion. 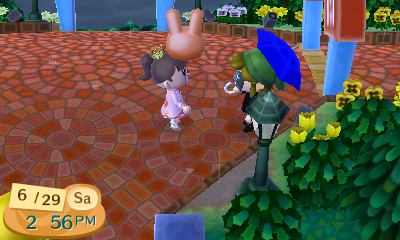 Orange Bunny Balloon <3 It was then time to sell off stuff at Re-Tail and also pick up my Lamp. I gave him the Regal Bookcase to do in Pink next.

I was then suddenly struck with an idea for the Cafe… I was going to put it down with the Water Pump to the right of it and possibly the Resetti Center in front of (or behind) that… But why not put the Cafe to the right and Water Pump to the left? That could still work and look nice too. The more I thought about it, the better I felt.

So, I placed it. And then I paid it off. I just hope the Lighthouse will still fit once I unlock it :/ Gonna build a streetlamp next to it tomorrow.

It was then time to visit Shrunk and give him more food.

Then it was just buying out shops as per usual. I also picked up my Bookcase and gave him the Hydrangea Bed to do next. 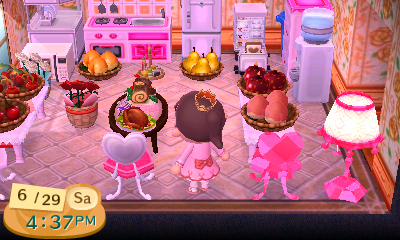 Picked up my Pink Hydrangea Bed. Gave him a Marshmallow Chair to do in Pink.

Then, it was off to the island. Club Tortimer items once again were terrible… My island wasn’t much better, but I think the items I really want at this point are Club Tortimer only :/ *sighs* 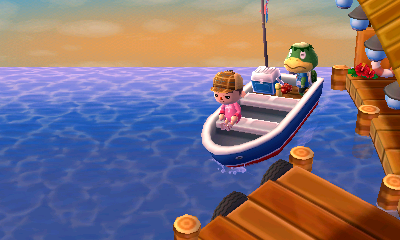 I did the tours last night with Ruu so I wasn’t going to do them again… thus I just went out to catch something to earn me my money back for bothering to check.

Picking up my Pink Marshmallow Chair~ 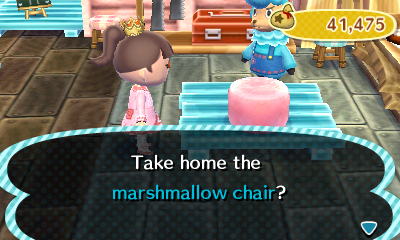 I then gave him the other one I am making to look like a Toasted Marshmallow for one of the rooms on my other character.

Regardless, with the Pink Marshmallow Chair, the only thing I’m missing in my bedroom is the Pink Heart Balloon and Lily Player. And Spring Blossoms for the Cover Art.

Selaphi stopped by to give me a Dollhouse 😀

And just because it’s a pretty screenshot: 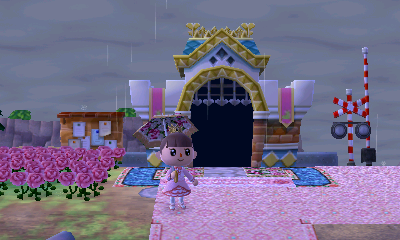 As I was shaking trees for no real reason, I then noticed something was different… My tree was bigger! 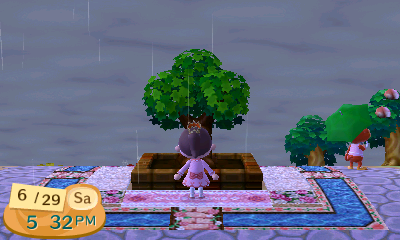 Unfortunately, I still can’t sit on it yet.

I then worked on paths a bit more until Blue invited me over due to presents 😀 She gave me a Lily Player and a Merlion and some other things! Now I just need the Pink Heart Balloon and Spring Blossoms for the Bedroom and just a few of the…waterfilled tub/bath things, Sand Castle, and Sea Globe for the Mermaid Room :3 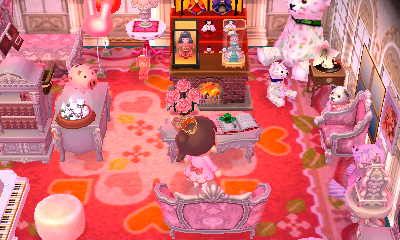 So close <3 Speaking of said Mermaid room, I made it a bit roomier too: 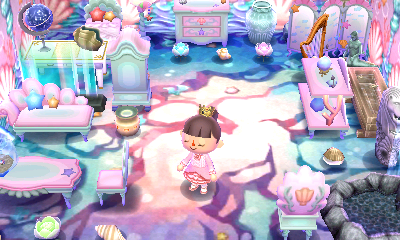 I may try to get 2 more Mermaid Tables too…

The Main Room is actually almost done too: 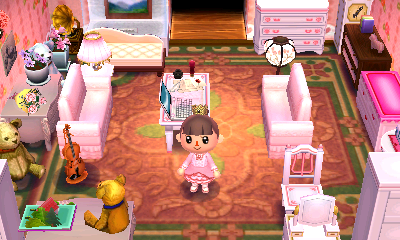 Mostly need some of the Firework items for it now.

I would say the Toy Room, Kitchen, and Trophy room are probably missing the most stuff at the moment.

I then picked up my last Marshmallow Chair and gave Cyrus the last thing I have for him to refurbish at the moment–a Ranch Wardrobe.

I will be ordering 4 Rococo Dressers and another Lovely Endtable though so he’ll still have more to do tomorrow.

Before switching to do more pattern stuff, I decided to stop by the HHA at Nook’s Homes. I REALLY want to hit 150K. I don’t care too much about the gold exterior stuff though so I don’t think I’ll bother with that. Unfortunately, my score is only 84,114 :/ I’m not sure how I’ll get it up 65,886 points… *sighs* I hate the HHA ._.

After more pattern things, I went and stopped by at my boyfriend’s to drop off some presents. Then, it was after 8PM and my first Saturday since opening Club LOL so… 😀

K.K. CELEBRATION 😀 I wish you could request the first time–got stuck hearing Space K.K. 😛 I wanted to request Spring Blossoms, K.K. Lullaby, and Surfin’ K.K. for the cover art, but oh well. For now, I may just go through all the songs (maybe even the ones I hate) to see if that counts for the badge. I did almost all of his songs plus updated my town in the Dream Suite before I decided to run out for a late night trip to Best Buy… >>

Today is the last day for the Raccoon Clock and, while I do have one, I guess I’d just like to actually do the event so to speak. I know you can also change your SSID as well–but I’d just be bothered doing that.

So, thus, late night trip! And seeing if the item updates at midnight.

Edit: So, apparently, they close at 10PM on Saturday for some reason and are only open 24 hours Tuesday, Wednesday, Thursday, and Friday…

On the brightside, I made sure to pick up the Ranch Wardrobe before 11. 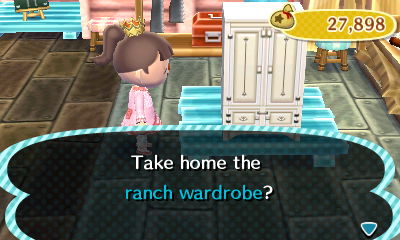 I also got to visit Zed’s town for a bit 🙂 I got to catalog a lot of stuff and even get new fossils!

We even played minigames :3

Thank you for the fun time Zed! <3 After that, I just had some people come over for best friending :3

And that was it for today <3