Because I am up for some reason at nearly 6AM, I decided to try and have an early day–even if I’ll probably be taking a nap within an hour or so and that “early start” will be ruined since not much is opened at that time. 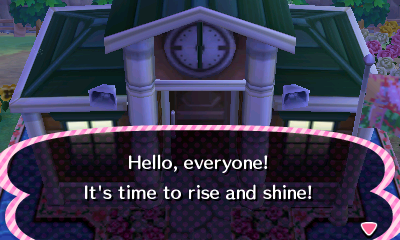 It was nice to see. I had some mail–received a Sketchbook from Katie. Also, the 6AM music is very pretty.

I also apparently upgraded my Trophy Room instead of my Kitchen… oops. Shall do the Kitchen today then with the Toy Room tomorrow.

Anyway, while there was still stuff I needed to do (like celebrate the Cafe, go to the cafe, and dig for fossils), Matt invited me over to his Japanese town! So I decided to stop there first :3

I had fun catalogging things <3 (so want to get one of those glass cases with the books in them...)

Upon getting back to town, I noticed an exciting message on the bulletin board. 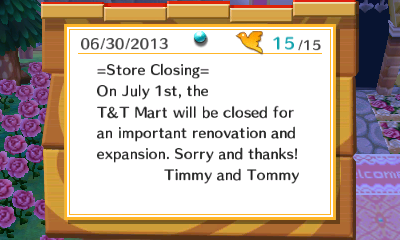 It was then to Town Hall to celebrate! 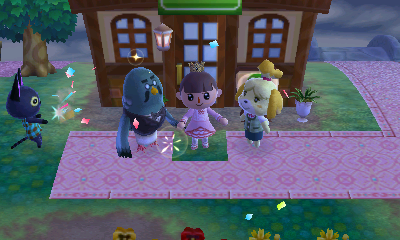 I was excited to be the first visitor to the cafe, but it seems I was beaten to it…

Regardless, I made sure to grab a cup to enjoy. I’ve always loved the music in the cafe.

I also noticed the tent was up! It’s been a while since I got a camper. 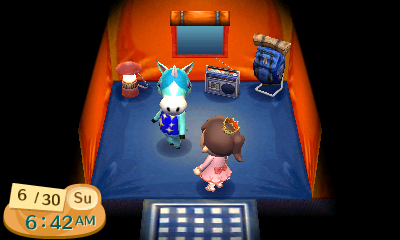 And it’s Julian, the unicorn! I’m actually really tempted to invite him… but my town is pretty full as it is and I’m worried where his house may go… I told him he could move in if he wants, but he said he likes it where he is so I guess faith decided that. Going to resist going out of my way… afterall, the spots I can see that are opened would make me cry if he moved into any of them… I need to get more Public Works unlocked.

I also had my first Mushroom by a stump today 😀 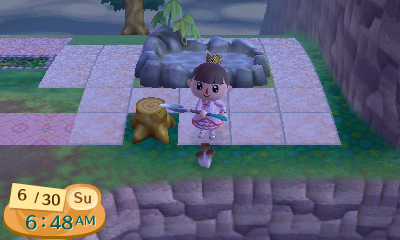 When I ran into Joan, I remembered today was Sunday… *MAY BE A LITTLE OUT OF IT* 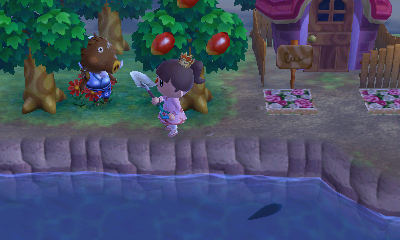 Anyway, the only shop that would be opened is the Nookling shop so I went to clean it out (and hope this counts towards T.I.Y.) 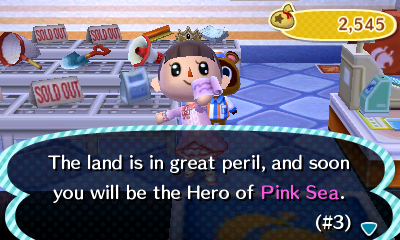 I have to say, I like the name drop.

My money rock ended up giving me gems today. I now have enough Gold to make 2 Gold Furniture pieces so I may do that. 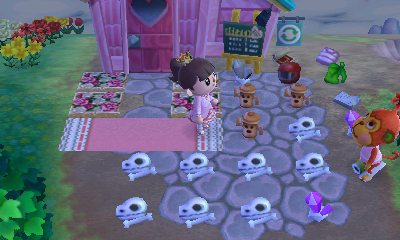 I have quite a bit to sell too.

It was then off to Town Hall to build the Street Lamp near the Cafe. 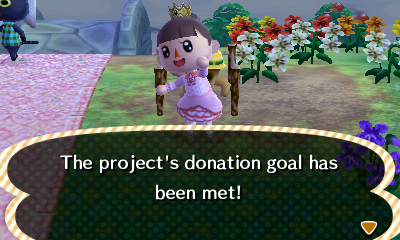 Placed and Paid off. I would’ve liked it closer to the cafe…but between Kyle’s house and the cafe’s restrictions… -_- *sighs*

It also soon hit me that today is the last day of June which means July hits tomorrow! Thus, I will be making sure I am ready to look for the following: 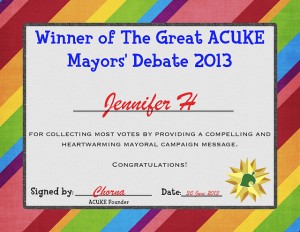 Thank you to whoever voted for me!

Anyway, as for actually loading the game up, I was greeted with lots of mail. All the stuff I ordered plus I apparently hit 90,000 with the HHA. 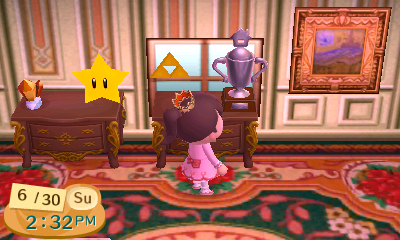 They gave me a Silver Trophy. Just ~60,000 to go… I may do a mixture of Classic and Gorgeous for the Trophy Room… Gorgeous more for the couch/chairs while Classic for the Table and stuff. Because obviously I enjoy torturing myself.

While there was stuff I wanted Refurbished more, I gave Cyrus the 3 Gold Ore first as I desperately needed inventory space. 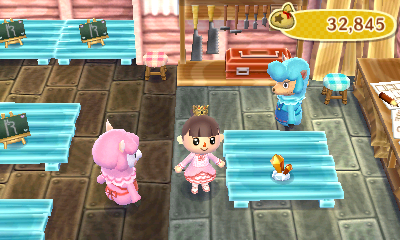 After selling off my pile of stuff to Re-Tail, I then headed to meet up with Dr. Shrunk. 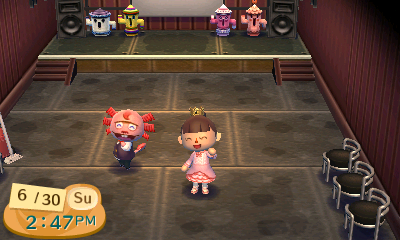 Greetings Joke! It looks more like a fist pump than a wave though.

It was then off to Nook’s to get my home loan. After paying it off, I properly expanded my kitchen this time.

Even though I don’t have to clear out the Able Sister’s at this point, I often do out of paranoia that I haven’t catalogged something yet (even if I’m pretty sure I have). My memory is good–I just worry easily. Thus why I really need to get my lists up (and why I’m not streaming today).

I also stopped by Street Pass. I received a Tweeter from my mom and a Pink Heart Balloon from my boyfriend! 😀 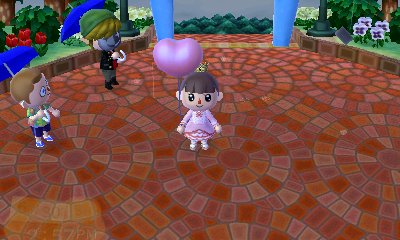 Eeeee 😀 I ran so fast to put that in my house. I have to say, I love the new lighter pink color for the balloons.

Now, other than CD Art and maybe some Princess stuff, my bedroom is complete.

Flip tried to call me Li’l J. I told him no. He then thought of something a bit better.

I hope this replaces Honeybun.

My first Golden piece is the Golden Closet! 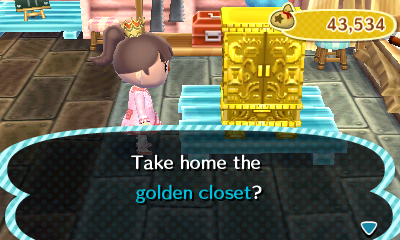 Second was a Golden Man. I gave him the Classic Clock to do next. 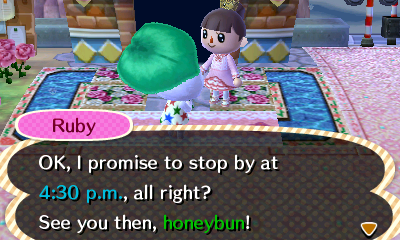 It was then off to the island to hope for non-sucky items and be sad when they do, infact, suck. With my handy dandy no-tanning outfit on, it was onto Kapp’n’s boat! As expected, there wasn’t anything good… it also disconnected which kind of stunk, but I didn’t really do anything anyway. It was then to my normal island, which also lacked anything good, but at least I could do some minigames. There was only really one that caught my eye, so I decided to do the Advanced Price-Fishing Tour.

I managed to get 60,500 which got me a Gold Tortimer Award and 12 Medals~ Yay. After that, it was time to get back home.

I then realized it was past the time I was supposed to be Ruby so I quickly ran to my house. 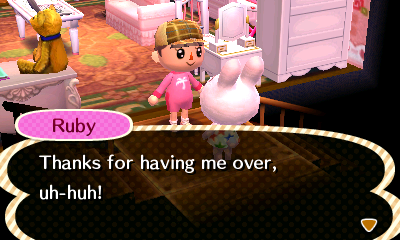 Thankfully, I didn’t miss her. 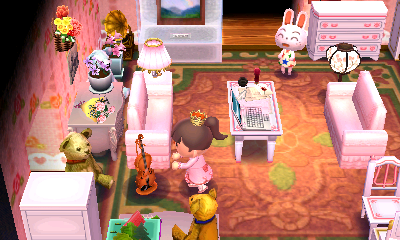 Playing Violin for her~

After that and some more pattern adjustments, I went to pick the Clock back up. I gave him a Lovely Endtable to do next.

I then went to update my Dream Village @-@ 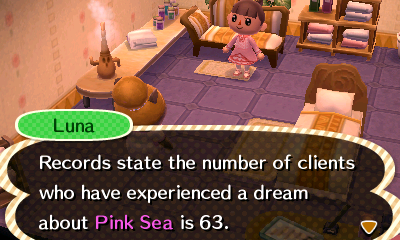 SO MANY PEOPLE. o_o I wish my town was more appealing 🙁 I still have lots to do though and need to earn way more bells (and probably get through a year) before it’s anything awesome…

I’d like to do a bunch of Dream Villages later, but since the Dream Suite is 24/7 anyway, I decided to try and see if I can get any villager requests for now along with possibly working on pathing a bit more. 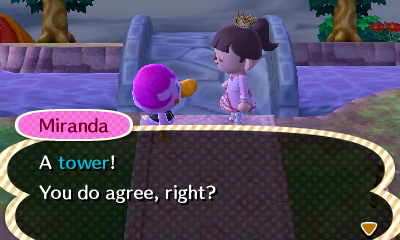 NO. YOU ARE SUPPOSED TO REQUEST A STATUE FOUNTAIN. T__T *sighs*

Rocco came over to see my house. 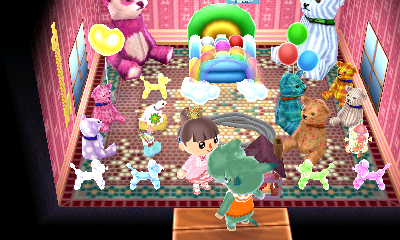 I think it may have been too girly for him.

Picking up my Endtable :3 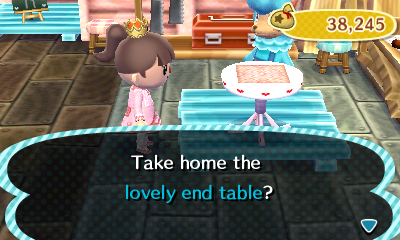 I actually really liked how it came out so I decided to get the Minitable from the bedroom and do it the same way.

After that, I decided to just try and practice my fishing and bug catching for tomorrow… While still hoping for requests and looking over pattern stuff. I also picked up my next Lovely End Table and gave him the Rococo Dressers to refurbish. Shall hope to get all of them done tonight.

I also stopped by my boyfriend’s to drop off more stuff for him. And did a little shopping too~

It was mostly a quiet day after though. Eclipsed did come and give me a few of Gulliver’s items and a Sand Castle 😀 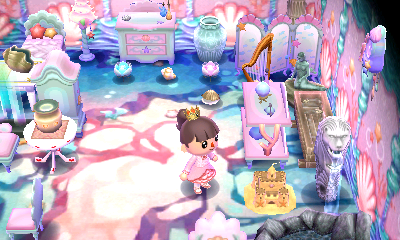 Anyway, I need to make sure I remember that July 16th sadly starts Detective Hat until 54PM season until September 15th